Amitabh Bachchan turns 76: Abhishek reveals the ‘shy’, ‘loner’ side of his father


The younger Bachchan spoke at length at the recent Jagran Film Summit about his father's personality when he is away from the public eye.

Amitabh Bachchan at the peak of his stardom

Plenty has been written and said about the acting prowess of Amitabh Bachchan and his remarkable career. From analysing his best performances to tracing his comeback journey in the past two decades, we have read and heard everything about his work on celluloid.

But there is not much information about Amitabh Bachchan the father or the family man. Although time and again his family members have spoken about him as a person, there has been no detailed description of the same.

Son Abhishek Bachchan threw light on this aspect of the one-time superstar's personality during a recent interaction at the Jagran Film Summit last month, held ahead of the 9th Jagran Film Festival.

Abhishek recalled that even film magazines were never allowed inside the house. When Abhishek was growing up and his father was in the superstar phase of his career, he had a running battle with the film press, particularly the gossip-driven magazines, whom he refused to entertain and who in turn referred to him mostly with titles like Big B, which are today seen as honorifics but were pejorative in the day.

“We never grew up like those typical film industry kids," the junior Bachchan said. "None of these film magazines were allowed in the house. There was this press ban that was going on at that point of time with my father. There were no Filmfares or any such magazines; not even trade papers. For many years of our lives, we didn’t even know about this concept of the film industry. It was just normal life. People find it a bit difficult to understand. I enjoy telling this as it just gives you a perspective.”

Quite naturally, Abhishek did not have an answer to the question he has been asked plenty of times. “People ask, what was it growing up with Amitabh and Jaya Bachchan? I am like, ‘Yeah, it was fine; it was normal. They are Mom and Dad,’” he said. Abhishek credits his mother more than his father for this. “She never allowed that [filmi-style upbringing]."

As a child, Abhishek found his father’s work so ordinary that he was under the impression all his friends’ fathers led the same kind of life. “Just try and put yourself in my shoes. When I was a kid, I thought everybody’s houses have like 500 people waiting outside. I thought all my school friends' fathers beat up 30-40 people, put people in an ambulance and jumped off buildings. That was my normal,” he said to much laughter.

But he also listed the advantages of being Amitabh Bachchan’s son. “I used to love going onto his film sets and hanging out there all day with him. And he used to love me coming and hanging around. It was great. It’s a wonderful childhood to have if this is the profession you want to be in. I grew up on the film sets of Prakash Mehra, Yash Chopra and Manmohan Desai. It was a privilege. It was a blessing. How many actors get to do that?” 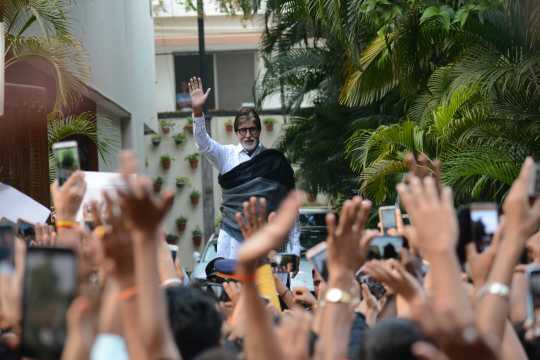 However, people would not treat him or his father differently when he went abroad for studies. “Over there, they didn’t care who you are. Dad used to come to my basketball matches or my plays and sit in the audience like a normal parent and enjoy or not enjoy it,” Abhishek said.

Much to everyone’s surprise, Abhishek agreed when asked if his father is a loner and shy in real life. “He likes time by himself," the son said. "A lot of actors do. Maybe you acquaint yourself with someone you actually know the least, which is yourself. I think every actor likes that time where they are like, ‘Let me be.’ But Dad by and large is somebody who is very shy. He keeps to himself a lot.”

Explaining the need for this, he added, “We put on this illusion that we are very social. And a part of it is because that demonstration is what gives you the confidence to go on stage and do what you have to do. But in order to do that and do true justice to that, you need to have the other end of it as well. You need to have that time by yourself where you can just think."

Abhishek also revealed his father's current schedule after finishing work. “He will finish KBC [Kaun Banega Crorepati, the television game show] at night, come home and give me a call saying ‘I am back.’ He will call me up to his TV area where he will be watching some sport or something and sit in silence. He likes his family around him, but then he is just quiet.”

Abhishek said Shah Rukh Khan, who succeeded his father as the industry's top-ranked star in the 1990s, shares the same characteristic. “Another person I have seen who does that, who I think is brilliant as a public person, is Shah Rukh. If you see Shah Rukh at home, he will be sitting in a corner reading a book. He is immensely shy. So, I see a lot of actors who need that time off.”