The final quarter of 2018 has some big releases lined up, both from Hindi cinema and Hollywood, and trade experts anticipate a sharp spike in business.

Traditionally, a festival period presents an ideal opportunity for big-ticket releases. And India, with its religious and cultural diversity, throws up quite a few such occasions in a calendar year.

The final quarter of 2018 presents a big opportunity for Indian producers, distributors and exhibitors. From Diwali, fans will be treated to a variety of content, both desi and international.

Up first is Thugs Of Hindostan, starring Aamir Khan and Amitabh Bachchan, which hits the screens on Thursday.

At the end of the month will come the biggest film to be made in India so far, the trilingual 2.0 with Rajinikanth and Akshay Kumar. The Robot (2010) sequel, made in Tamil, Telugu and Hindi, is set for release on 29 November.

While their film is not comparable in budgetary size to Thugs Of Hindostan and 2.0, director Abhishek Kapoor and co-producer Ronnie Screwvala will be pinning their hopes on the 'love pilgrimage’ drama Kedarnath, which marks the debut of Saif Ali Khan and ex-wife Amrita Singh’s daughter Sara Ali Khan.

A couple of weeks after Kedarnath, fans will welcome Shah Rukh Khan’s Zero on 21 December. And one week later Rohit Shetty’s Ranveer Singh-starrer Simmba will hit the screens.

“It is rare to have 4-5 big films being released in one quarter,” trade analyst Atul Mohan said.

“We also have Spiderman, Aquaman, and Robin Hood from Hollywood," film exhibitor Akshaye Rathi said. "All these films are spectacles. I am confident this quarter is going to be one of the best for the film industry. In the worst case, I still expect the four big Hindi films — Thugs Of Hindostan, 2.0, Zero, Simmba — to bring in Rs800 crore nett revenue.”

An industry insider, who did not want to be identified, said, “The estimation will always be higher. Whether these films can meet expectations depends on the content. But I feel the net business from Diwali to 31 December should be around Rs1,000 crore. Of these, I expect Simmba to do the most business.”

A clearer picture of the commercial prospects of Zero and Simmba will emerge later, but for now all eyes are on Yash Raj Films’ Thugs Of Hindostan.

Diwali is perhaps India's biggest festival. But a look at recent cinema history suggests that films being released during Diwali do not necessarily become superhits.

“Be it a solo release or in competition, no Diwali release except Golmaal Again (2017) has crossed Rs200 crore nett," said Atul Mohan.

Thugs Of Hindostan is Aamir Khan’s second successive Diwali release. Last year he had Secret Superstar (2017). "But that was a limited release," Atul Mohan said. "In the past, I think Aamir Khan had Andaz Apna Apna (1994), a Diwali release, and I think there was Raja Hindustani (1996), which was released just after Diwali, Of course, the market was very different then.”

The last time YRF and director Vijay Krishna Acharya came together, they gave us the blockbuster Dhoom 3 (2013), which bagged Rs260.83 crore nett at the domestic box office, a record at the time (source: BoxOfficeIndia.com). Besides, Aamir Khan and Amitabh Bachchan are coming together for the first time in a film. 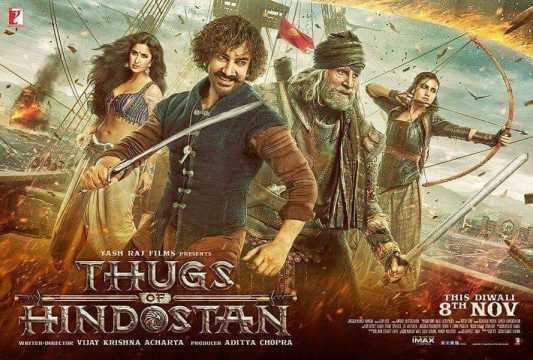 Can the Thugs come close to or surpass Aamir Khan's Dangal (2016)? Dangal currently holds the record for the highest grossing Hindi film, having collected Rs374.53 crore nett in India.

But the experts are not looking as far as Dangal, or even Dhoom 3. They estimate that the Thugs should bag at least Rs200 crore nett.

Atul Mohan and the industry insider said the film would be released on 4,500-plus screens across India. Rathi put the count at 4,700-plus (including an estimated 700 screens in Tamil and Telugu).

“In the worst case, I expect Thugs to get a minimum of Rs200 crore nett India business," said Rathi. "Don’t forget Yash Raj Films distributes its films itself — domestically and internationally. I’m sure they have commanded a good price for satellite and digital rights. They must have recovered a substantial portion of their cost through the ancillary rights.”

Atul Mohan pointed out that the film enjoys a four-day opening weekend. "If it gets a grand opening of around Rs35 crore nett, we could look at a weekend collection of around Rs125-Rs140 crore nett. After that, it will work purely on content. But I expect the film to make between Rs200 crore and Rs250 crore nett in theatrical revenue."

One reason for the higher targets is that ticket prices shoot up for festive releases. Rathi said tickets would be priced at least 10% higher than those for Rajkumar Hirani’s Sanju (2018). The Ranbir Kapoor-starrer went on to make Rs334.crore nett in India.

The insider, however, is not too confident about Thugs Of Hindostan. “Given that it is Diwali, you would expect a bumper opening," the source agreed. "But the real test of the film would be after the four-day opening weekend. I have a feeling it may not cross Rs200 crore.”

This scepticism stems from the fact that the trailer and the songs have got mixed response from cine-goers. The comparison with the Pirates Of The Caribbean franchise, too, does not reflect well on the film. Besides, the source said, it is not clear if the audience is really excited about seeing Bachchan and Aamir Khan together for the first time on the big screen.

“I’m not sure audiences want to see Amitabh Bachchan do action at this age [he turned 76 last month]," the source quipped. "What we see in the trailer looks unbelievable. If the character had been positioned as a cerebral person operating from a desk, it would have been believable. Besides, despite Katrina Kaif's presence, the music has not taken off. There is no lyrical appeal to the songs."

Atul Mohan preferred to adopt a wait-n-watch approach. “While comparisons exist, all this talk is limited to the metros," he said. "The trailer and songs may be below par, but would all this have an impact on the film’s commercial prospects? We have to see.”

The insider was also unsure if Thugs would appeal to a family audience. "Traditionally, the films that do well on Diwali are mass entertainers. Golmaal  Agian worked because it was a Rohit Shetty film. And people know his films have pan-India appeal. Secret Superstar had a limited release, but it was an ideal family film."

According to some other industry sources, the estimated budget of Thugs Of Hindostan is close to Rs200 crore. One suggested the film may have already recovered Rs150 crore through satellite rights. But another said the satellite and digital rights have been sold for Rs110 crore. “If the film makes Rs200 crore nett in the domesic market, Yash Raj Films should get good returns on investment,” the source said.

The satellite rights are with Sony Entertainment Television while YRF has signed an exclusive deal with Amazon Prime Video for the digital rights.

The prospects of Abhishek Kapoor’s Kedarnath will depend upon the initial success of 2.0. The trilingual is already the most expensive film made in India. 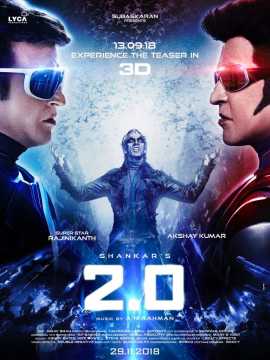 At the trailer launch on 3 November in Chennai, Rajinikanth stunned everyone by proclaiming that the film had been made at a staggering cost of Rs550 crore. It was earlier rumoured to have been Rs450 crore. 2.0 is the second film in the Enthiran / Robot franchise and is produced by Lyca, with director S.Shankar helming the second one too.

Rathi remarked, “If the producers themselves say the film has been made at an estimated budget of $75 million [about Rs546 crore at the current exchange rate], who are we to dispute it?”

SS Rajamouli’s two Baahubali films — Baahubali: The Beginning (2015) and Baahubali: The Conclusion (2017) — together are said to have cost Rs450 crore. Rathi is not surprised that 2.0 has raised the stakes.

“The game has changed to a scenario where the big screen spectacular has great traction," he said. "If you see the scale and set-up of the film, it is one of the biggest films in Indian cinema. It has Rajinikanth and Akshay Kumar and AR Rahman, top production values and VFX. It doesn’t get any bigger than that.”

With Rs550 crore riding on 2.0, Rathi expressed confidence that the film would recover a substantial portion through satellite and digital rights. "I reckon the makers will be able to recover Rs250-300 crore through just satellite, digital and music rights," he said. The satellite rights will, of course, be different for the Hindi, Tamil and Telugu markets.

No big studio is involved with 2.0. Lyca Productions is the principal producer and distributor and it has tied up with Anil Thadani and Karan Johar's Dharma Productions to distribute the Hindi version. Given that it is a trilingual, 2.0 could well be the biggest release in India this year. According to the source, it would be looking at 6,000-plus screens in the country.

A source said Lyca had sold the satellite and digital rights for the Hindi version to Zee Telefilms for Rs125 crore. “The Tamil television market is dominated by Sun TV and Jaya TV, that is why it is impossible to attract much satellite revenue there," the source said. "Nevertheless, they would hope to bag around Rs50-60 crore. The Telugu and Karnataka market rates are still being negotiated.”

“For the Hindi version, the producers wanted Rs200 crore for all rights — theatrical, digital, satellite. But no one came forward at that price. Out of this, they were able to sell satellite and digital to Zee for Rs126 crore. Eventually, they are releasing the film on commission through Anil Thadani and Karan Johar’s Dharma Productions platform,” added the source.