No better actor to play the character than Sanjai Mishra: Director Pavan Kumar Chauhan on his star


Pavan Kumar Chauhan, director of Ekkees Tareekh: Shubh Muhurat, speaks about the experience of working with Mishra, his small-town plot, and the professionalism of babas.

"Like in journalism, there is competition among babas [religious savants]," says director Pavan Kumar Chauhan.

With his debut feature, Ekkees Tareekh: Shubh Muhurat, which was released on 2 November, Chauhan has turned to filmmaking after a decade in journalism. It was from his experience as a newsgatherer in small towns that the germ of the idea for the film arose.

Speaking to Cinestaan.com on the telephone, Chauhan described his film as 'the reality of our middle-class society'.

"It is the reality of the middle class, who live for their dreams but never realize them owing to the responsibilities on them," the director said. "They often find themselves helpless in the face of the failing dream and rising responsibilities. That is why they keep seeking miracles, and support."

Chauhan's story captures the dilemma of the middle class, the ethos of the small town and its culture. Nowhere is it presented better than in the lead actor, Sanjai Mishra. The National award-winner plays the confounded father on this journey.

Praising Mishra as a brilliant actor, Chauhan said, "Our film is a satire on society, and his character is that of a pandit who is not interested in it. He wants to commercialize his work, build an ashram, gather followers. But whatever attempt he makes never succeeds. There is a certain likeability and helplessness to him. I could not see a better actor for the character than Sanjai Mishra." 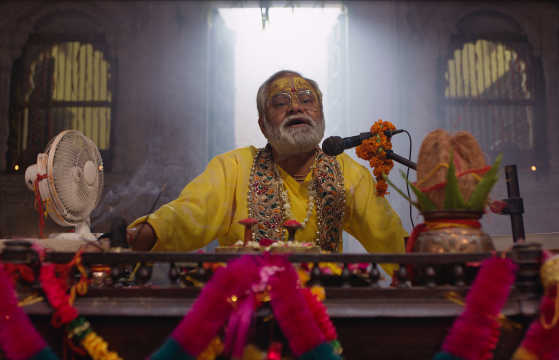 Describing himself as nervous when he first met the actor, Chauhan expressed relief that Mishra said yes almost immediately after the narration. "When we work, he keeps giving inputs," the director said. "This is my debut feature, and he keeps doing things that help you learn. He is a very genuine person, emotional in his work."

The film also captures an interesting aside in the form of Mishra's character. The pandit's dream of building a big ashram and gathering followers was a trait the director had seen from close quarters during his time as a video journalist.

"These days, any industry is filled with competition," Chauhan said. "In the same way, babas have a hugely competitive field. When I was a journalist working for India News, I noticed the morning show slot was always sold to babas. I wanted to use this element in a character. To show that this has been turned into a profession. These babas also have a style of speaking, sponsors, followers etc. I had seen this reality and stitched it into my story."

But, the director emphasized, he did not want to turn the story to become too serious or preachy. "I wanted to make a film that is entertaining," he said. "I did not want viewers to think 'Oh, this is another message-laden film.'

"There are multiple elements like the daughter's wedding, the dowry problem, the life, but we have dealt with them with humour. At the same time, we have tried to ensure that the story keeps moving without distracting the audience from the subject."

The film, released by PVR Pictures, has been produced by Rajesh Kumar Jodhani and Mukesh Jodhani under the banner of Bankey Bihari Enterprise.