Sugumar and writer-director-editor Priya Krishnaswamy speak about how they cast nearly 80 artistes to tell their story strongly.

Perfect casting can make all the difference to a film. Films set in rural India often throw up acting gems.

Speaking about the artistes in the Tamil film Baaram, Sugumar Shanmugam, the film's casting director, said, “Since it is based on a real story, Priya was very clear that it shouldn’t have commercial acting, which meant no people who were experienced in front of a camera. We focused on realistic characters through which we could narrate the story more strongly. Hence, we had a 15-day workshop before the shoot. In the workshop, we blocked out the scenes and rectified the mistakes of the actors. This is how it worked.” 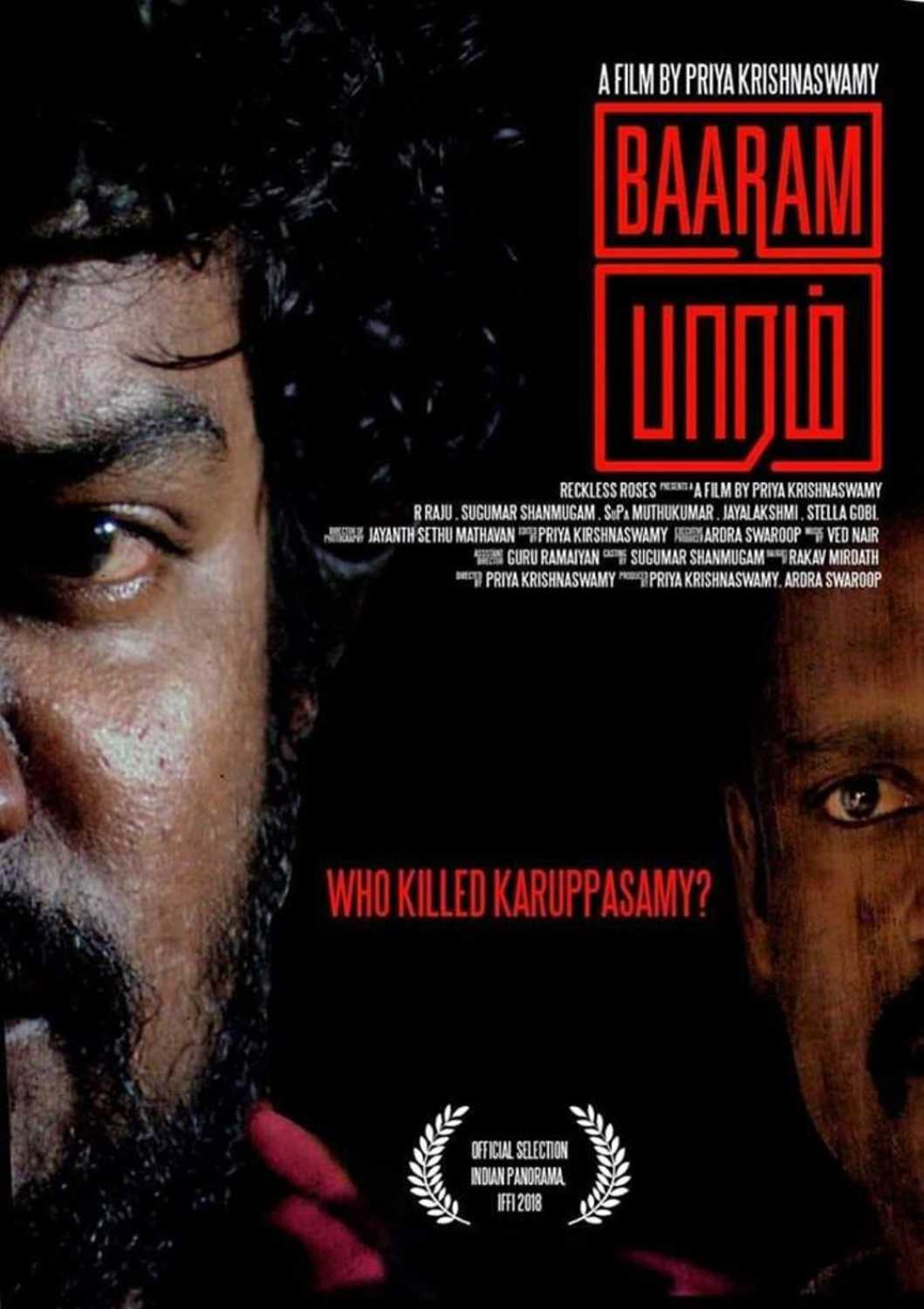 Baaram is a 92-minute film about the social practice of Thalaikoothal, meaning cold bath, a euphemism for mercy killing of the elderly.

Remarkably, the practice of using different ways to put elderly family members to sleep has social sanction. Baaram follows the story of one old man, Karuppasamy, and his sudden death after an accident in which he suffers a hip injury.

Baaram has been written, directed and edited by Priya Krishnaswamy. The film was screened in the Indian Panorama section at the 49th International Film Festival of India (IFFI) in Goa.

The film effectively exposes a social evil through in-depth research, realistic performances, camerawork and unobtrusive editing. The film features veteran actor Dr R Raju, who is the head of the acting department at Pondicherry University. Casting director Sugumar plays an activist and Karuppasamy’s nephew who strives to expose the evil of Thalaikoothal.

Priya, who has previously made Gangoobai (2013), starring Sarita Joshi, said she felt she had a simple story at hand but ended up needing 80 characters. “No way can you cast 80 actors!" she said. "When I came to the actors, I told them they had to stick to the content, but they are allowed to improvise. That brought in a fluidity into the way they interpreted it. We were very clear that a scene has to begin with this and end with that because it will link into the next scene. I’m an editor by training so I know you can’t just devise it out of thin air.”

Priya also narrated how she found Dr Raju to play the 65-year-old Karuppasamy. “It was amazing, but a difficult role to cast," she said. "A 65-year-old with a certain amount of art that I can’t see. I knew Pondicherry University has a great drama department because I had seen them. Baaram is a story of a community, and I couldn’t create the sense of a community with strangers. So I knew I had to pick up my characters en masse.

"My daughter, who is a producer, reminded me of a play we saw in Cuddalore. I went to Auroville [in Pondicherry] and a friend suggested I meet this guy who could help. He was HoD [head of department] at Pondicherry University at that time. I sat opposite him and asked, ‘Sir, do you still act?’ He was, yes I do. No test, no nothing. Later I discovered that he studied at the National School of Drama under Ebrahim Alkazi!”

Sugumar is currently pursuing his doctorate in theatre from the department of performing arts at Pondicherry Central University. His major areas of research are characterization, actor’s physiology and bio-psychology.

Sugumar said there are two types of casting for any project. “One is taking professional actors," he explained. "Once we pick them, we need to turn them into a character.

"The second way is that there are already characters existing. But if we pick them, we need to conduct workshops for them to face the camera. For both kinds of casting we need workshops — one for the character and the other for the camera.

"We chose the second type of casting process. We travelled a lot in villages and found the right people [for Baaram]. We had auditions on the spot.”