The documentary will be screened today (23 November) at the 6th Woodpecker International Film Festival in Siri Fort Auditorium, New Delhi.

Vaikhari, in Sanskrit means 'utterance of sounds or words that are complete consisting of full and intelligible sentences'. It primarily focuses on padhant, that is the art of recitation of mnemonic syllables used in Indian classical percussion and dance.

Lubdhak Chatterjee’s film follows a dancer’s journey as she choreographs for Meghdootam where we observe the stages of artistic contemplation with special emphasis on theoretical and practical aspects of padhant involved in conversion of the essence of literary stanzas into their rhythmic analogues – the whole process being in symphony with tabla, pakhawaj, sarangi players, as well as, a dhrupad singer.

Vaikhari will be screened today (23 November) at the 6th Woodpecker International Film Festival 2018, in Siri Fort Auditorium, New Delhi. The festival will be held from 23-25 November.

In conversation with us, the filmmaker discusses his engagement with the world of utterances and the journey that he wishes the audience to be initiated into. Excerpts.

In your film you explore various art forms — dance, music, calligraphy, and nature — and the ways in which all these are entwined. What was the thought process that led to this exploration in the film between various art forms?

I like the fact that you used the word ‘entwined’ because if we look at Indian art or the school of thought, most of the stuff is interlinked. My point of initiation was the keen interest I had taken in this art form about the utterances, which I used to experience in music concerts or dance concerts…which I had attended since childhood.

I was brought up in Calcutta in an environment where I was exposed to this. When I decided to make a film, I thought that this was a good subject for me to work on. It was an exploration for me... and one thing led to another. The first day when Parwati di [Parwati Dutta] started talking…there were layers upon layers that were revealed and not just utterances, and the film took a very different turn…there is something much more fundamental in these utterances or in the act of uttering the syllables which connects us to Indian thought or Indian philosophy.

So that’s how the film began, and I must say that nature has always inspired me and confused me as well. As an only child of my parents, I had a lot of solitude…so nature always intrigued me and I wanted to include nature in this film because when I talk about rhythmic utterances, rhythm is an intrinsic element in nature… we talk about the diurnal nature of the sun, the seasons, the heartbeat.

The one thing which united the discrete parts [in the film] was Kalidas’ Meghdootam, when I decided to have a narrative thread or a bridge running through the film. After a lot of contemplation and discussion we chose Meghdootam as the piece that helped me integrate all these discrete parts and it showed me the path in how to integrate all these elements — calligraphy or dance and music — to key elements in the film.

There’s this beautiful sequence in the film where the dance performance takes place in the Ellora caves, which makes us imagine what performances might have been like in ancient times. How was that conceived? 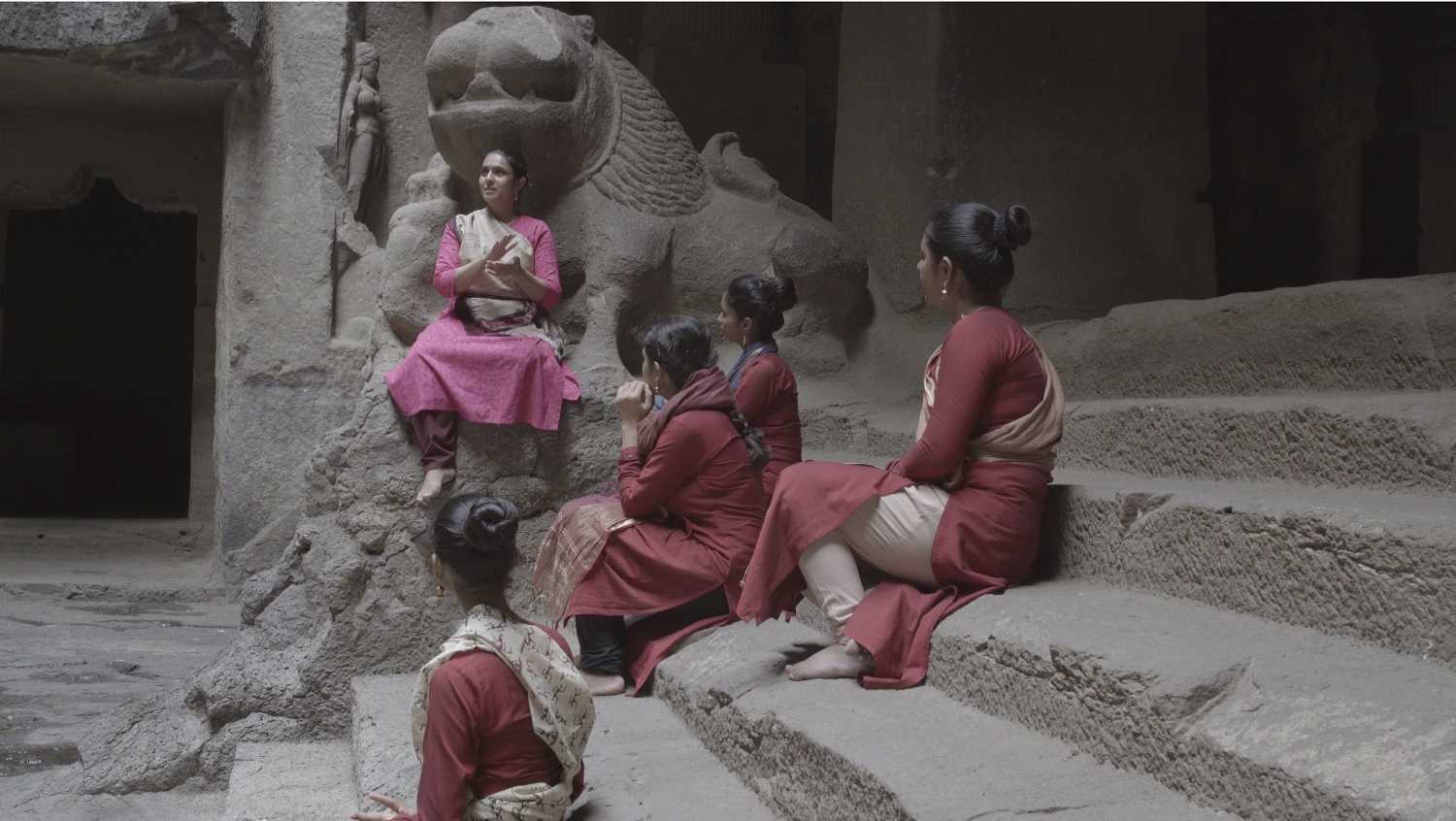 As I mentioned, we had selected Meghdootam as the narrative thread. Initially, we had selected stanzas and I was following the text in a linear manner. I wanted to explore different stanzas in different ways. Some through calligraphy, some through music, others through dance…some through classroom discussions. We also decided that we will use some allusions to Natyashastra and the ancient texts which refers to the utterances.

Since we were shooting in Aurangabad, Ellora was very near, so we decided that we could go there and have certain sequences where Parwati didi is discussing the Natyashastra with her students. She was talking about Nirgeet, which is on utterances in the text and we felt that we could shoot that in the cave and temporize that whole idea because, as you said, it takes you back to the time when these art forms were practiced. It was keeping this thought in mind, of experiencing Nirgeet through a dance sequence.

Your film has been screened at the India Habitat Centre and at the Open Frame Film Festival and now it's at Woodpecker Film Festival. What are the kind of responses you have been receiving for your film. Many people, like me, would not have even thought about the art forms and utterances...

I want people to engage with the film because of its intrinsic material of the world of utterances. Basically, people have asked me lots of questions about my choices and I would love people to experience the fundamentals of the art forms and whatever we could portray.

As a documentary filmmaker I know that we are required to document things, but for me, music, being an art form, is also about experience, so I really want people to get engaged. The film was screened at SRFTI (Satyajit Ray Film and Television Institute) and we had a Q and A which lasted for over an hour. There were different responses as there were people from different cultural backgrounds.

My idea is also to present the film at various music and dance academies. Engaging with them also opens up a lot of horizons for me. Last, but not the least, this film is not the end to the world of utterances because I only initiate you. It’s a tiny introduction to this beautiful world and the film doesn’t end with the credits. Like in a good concert, it stays with you and probably starts a new journey. So, I want the film to trigger a new journey for people because I feel that the full experience can happen in a concert. That’s my idea that people can explore this subject in their own ways.