During an interview, the actress had cut a ‘Sweetu and MeToo’ joke and said she wished she had faced harassment in the film industry.

Actress Preity Zinta has apologized after her comments on the Hindi film industry's #MeToo movement triggered controversy and rage on social media.

During an interview to promote her upcoming film Bhaiaji Superhit, the actress had cut a ‘Sweetu and MeToo’ joke and said she wished she had faced harassment in the film industry.

These comments did not go down well with netizens.

Soon after the interview went viral and criticism started pouring in, the actress claimed the video was edited to make her look bad and her comments were taken out of context.

Now, Zinta has issued a statement to the media apologizing for "unintentionally hurting sentiments".

She began the statement by saying, “To all the women out there. I am sorry if I have unintentionally hurt your sentiments on the #MeToo movement. It’s ironic that someone who has gone through abuse, as I have, has to clarify this.”

In the video interview, however, when Zinta was asked if she had faced any harassment or anyone had tried their luck with her, she had said, laughing, “No I haven’t. I wish I had. So, I would know. At least, I would have an answer to tell you.”

Coming to this controversial statement, the actress said, “My reason for saying ‘I wish something like this would have happened to me’ in the film industry with a smile was because I would have reacted and slapped the person. So, it never happened and much later when it happened I did react and the whole world saw it. The Sweetu and MeToo comment was not mine but I was quoting a man, which implied that men are now cautious in their approach to women at work.” 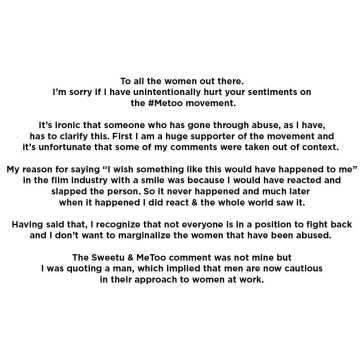 During the interview the actress had also said that some women level false accusations against men as a means to seek revenge.

Clearing her stand on the point, Zinta stated that her cousin, Nitin Chauhan, committed suicide in 2016 by shooting himself after being wrongly accused.

“The reason I don’t want this movement diluted with false accusations is because my brother went through it and eventually shot himself,” she wrote. 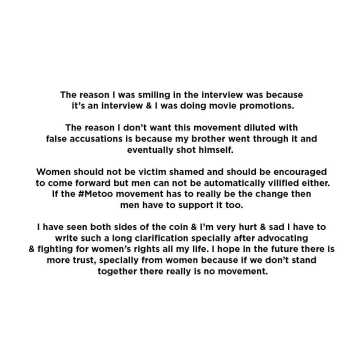 The actress also faced a backslash for blaming the victims. In the interview, she had said, “This is a very relevant question because people treat you the way you want to be treated.”

When the host said that "sometimes it is about how you project [yourself]", the actress nodded in agreement.

In her latest statement, however, the actress wrote that "women should not be victim shamed and should be encouraged to come forward but men cannot be automatically vilified either."

Watch the controversial interview below:

“People treat you the way you want to be treated,” says @realpreityzinta about survivors of sexual harassment.

Shocking victim-blaming while discussing #MeTooIndia—watch why women like #PreityZinta are part of the problem: pic.twitter.com/V1oG9DYvBu