India continues to disappoint me: Filmmaker Rajaditya Banerjee on how globalization has left the marginalized behind


Rajaditya Banerjee, whose Death Certificate was screened at KIFF 2018, talks passionately about his reasons for making the film and explains why he is critical of a developmental model that means progress for a few.

Screened as part of the ‘Unheard India’ section at the Kolkata International Film Festival (KIFF), Death Certificate is in the Kurmi language and tracks the travails of a tribal woman as she embarks on a search for her missing husband and comes face to face with red tape and the bureaucracy for the first time.

Directed by Rajaditya Banerjee, Death Certificate engages with the harsh reality of the lives of those on the margins of society.

In a conversation with Cinestaan.com on the sidelines of the festival, Banerjee spoke about his anti-elitist stance and the need for the country to think about the disfranchised. Excerpts:

You are an actor based in Helsinki [Finland] and this is your debut feature. What led you to make this unusual film that looks critically at India's bureaucracy?

My film deals primarily with death and not life. I always thought of making films and acting in them. I have a degree in filmmaking from the Film and Media School in Estonia. I just never found the time because I was busy acting in theatre.

My brother Bappaditya Bandopadhyay was a well-known independent filmmaker and won several Indian and international awards. Unfortunately, he died in 2015, at the very early age of 44. I was really lost and sad, and then I thought this is either going to kill me or I will have to make a comeback. The best way I could pay tribute to Dada was by making a feature film.

I have been a big fan of my father’s stories. The characters he creates and the world he creates, the messages he has, everything is so socially relevant and thought provoking. Then I chose this short story, a three-page story titled Death Certificate and decided to adapt it. I told my dad that I will take the liberty of adapting your story, but you cannot be very critical about it. I will adapt it in my way, I will not listen to your suggestions.

He agreed, but the saddest part is that he was able to see the rushes of the film but by the time the film was completed, we lost him. Just ten and a half months after my brother died. I thought I could either be sad about this or look at it in a different manner, because this is irony. So I decided to make a trilogy on death. This film is the first part, then I shot another documentary in Benares. I was fascinated by the concept of moksha.

So this is a deeply personal film for you.

It is a deeply personal film, but at the same time my film, my theatre always speaks about globalization. My question is, globalization for whom? Economics for whom?

Globalization has happened and lots of good things have happened, but the wealth that was supposed to be distributed is not going down to the poorest of the poor. So we have an India that is digitally evolving, but at the same time we have an India that is forgotten. That India is inhabited by people who have little or no connection with technology or whatever 5-7% GDP growth is happening. How do you as a society accommodate these people? How do you bring them into the mainstream? 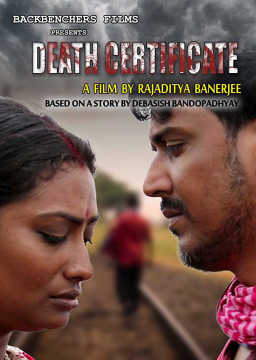 This film is about a woman who does not know what bureaucracy is and how cruel the world can be. Her husband dies, but people are doing business with his death. And then there is the chicken-and-egg question. Is his identity more important than the death certificate or the value of that paper? So this dichotomy, this juxtaposition, fascinated me.

Your film is part of the ‘Unheard India’ section as it’s a film in a rare language. Where did that inspiration come from?

I think I have always been a vagabond. I have always been interested in life and I feel that if you travel away from the beaten track, you get to see what life is. I just inherited this indomitable spirit from my father. In his youth, he travelled to every nook and corner of India. From an early age, I have been interacting with the tribals, the Santhals, in Chhattisgarh. I have been to Jharkhand and have seen these people's lives. I was also born outside the city so maybe I am deeply rooted in the countryside. Having lived in Western society for almost 25 years, India continues to disappoint me.

Because we are carried away by globalization, this mad gold rush happening in India and China where a lot of money is to be made. They are not doing their part to build India.

Isn’t that happening all over the world, not just in India?

It is happening all over the world, but it is disappointing because I come from India and I have a lot more expectations from India. Spiritualism was born in India and this is not really expected in India. In my next film, I look at how does spiritual India survive the digital assault. That fascinates me. I feel there is room for both these worlds to co-exist. So this is an anti-elitist film, as is my second film.

What has your experience been at the festival here?

It’s wonderful. I used to come to this festival to watch my brother’s films, so I am missing my brother. He loved world cinema.

I think this is a great festival. A lot of effort has been made. But I am just a little disappointed they haven’t included Aki Kaurismäki’s films. He is one of the major filmmakers and his films have been very anti-state and very pro-people and he is considered an excellent fairy-tale teller along with Lars von Trier and Michael Haneke, so this is something they [the festival organisers] really need to look into. His films should have been here. It would have been a treat for film lovers.