I think it is a wonderful time to be dreaming about change: Director Anjali Menon on #MeToo, changing times


In an exclusive interview to Cinestaan.com, the director of Koode (2018) and Oxfam jury member, Anjali Menon spoke on the #MeToo movement, judging films, and her writing process.

Director Anjali Menon rose to prominence with her fantastic writing for Ustad Hotel (2012). The film won her the National Award for Best Dialogues. Accolades soon followed with her debut film, Manjadikuru (2012), followed by the popular Bangalore Days (2014) and Koode (2018).

A member of the jury for the Oxfam Best Film on Gender Equality award at the 20th Jio MAMI Mumbai Film Festival, Menon spoke with Cinestaan.com over the phone about the need to establish a new gender narrative in cinema.

"In the current scenario, as technicians, and filmmakers who happen to be women, it is important for all of us to speak up because our experience is under-represented," said Menon. 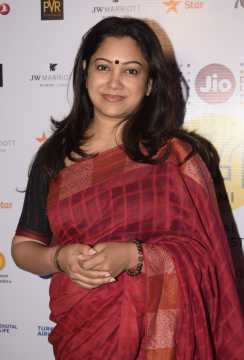 The director, an active member of the Women in Cinema Collective (WCC), is among the prominent faces involved in the struggle against Association of Malayalam Movie Actors (AMMA) to institute a redressal system for women actors and technicians in the industry.

However, Menon believes that despite the fierce nature of the #MeToo movement, change will take time.

"People will struggle a bit because of the values in which they have been raised, and the structures around them. But it is perfectly okay for them to go through the struggle and then come out of it," she said.

How do you judge a film? For many people, the criteria seem different...

It is the experience of a film which informs our judgement, so to speak. We are only representative of a larger audience. When we are chosen as jury...the tougher part is for people to choose the jury, whose opinion they think is representative of the audience. As a jury member, when I watch a film, I go by the experience I am having when I am watching the film. The text, the entire...what do we say, what the movie does to us, is the most significant thing.

The films nominated for the Oxfam Best Film on Gender Equality award are interesting, but I couldn't help but notice that most of them are by men...

Why is that? Was that a jury choice?

A whole chunk of the film made world over is by men. I don't know if this is a conscious decision on the part of the selectors of the festival, or whether it has happened that way. I really don't know.

There is an increasing number of women leading the way in terms of filmmaking. How important is it for women filmmakers like yourself to emphasise both identities in the current scenario of women seeking their rights. Or is it still irrelevant.

In terms of my work, such situations make us bring gender into the foreground. We cannot but ignore that. Yet, at the same time, we need to understand that gender is a part of us and in the process of making a film, I might not be focussing on my gender.

What I am trying to say is when you are talking about general equality, gender should be irrelevant. In the current scenario, as technicians and filmmakers who happen to be women, it is important for all of us to speak up because our experience is under-represented.

Looking at how we can flip women’s condition: Rima Das at Oxfam 'Women In Film' brunch

The #MeToo movement is a fine start, but it has exposed a major fault line in the industry. Do you see a change forthcoming?

What we have here is a cultural gap. As a culture, within the industry or outside, we are quite the patriarchal culture. Now, we have a lot of people who have come together only for the passion of the profession. When this patriarchy is a part of the professional practice, then, of course, it is time to take action

I think it is a wonderful time to be dreaming about change. It may take some time, but the kind of situation we are in is a beautiful opportunity to bring in change. People will struggle a bit because of the values in which they have been raised, and the structures around them. But it is perfectly okay for them to go through the struggle and then come out of it.

The Women in Cinema Collective (WCC) has been going in a great way to help women working in Malayalam cinema find a redressal. The #MeToo movement has now led to several associations waking up and offering to help survivors. Is this the way forward, collectively?

Any association that truly works towards the welfare of women is definitely welcome. Be it any association, if it brings about a change for the better, it is welcome. At such times, the under-represented voice are actually audible only when you come together. That is the aim of the collective.

Though we have not gone the entire journey, we are in the process of trying to put together a system. We are highlighting the lacunae, the need for such a system. That has never been spoken about.

In an industry, where women are really ignored, to speak about such an issue is hugely disruptive. We are essentially a disruptive collective for the better change. It will play a significant role. World over we have seen that there have been advocacy groups which have been able to change a mindset, propose a definition and bring about a solution.

Media trial is well and good, but we have taken the next step: WCC at MAMI panel

To shift conversation to your films, whether it is Koode (2018) or Bangalore Days (2014), or Ustad Hotel (2012) which you wrote, there seems to be a search of identity for your characters, a sense of rootlessness. Where does that stem from?

Ustad Hotel also has the underlying connection of food with Faizi's (played by Dulquer Salmaan) journey which I found interesting. The inclusion seems natural and almost, inevitable. How did that connection strike you?

In Ustad Hotel, you are speaking about a journey of a young man who has to choose between two paths. One is a past holding on to many strict impositions which will lead him to material wealth, position in society, a lot of things which are on the outside. The other path is more introspective, internal about recognising values, about what is within and what matters, irrespective of his material considerations.

The current generation is in the same kind of flux. We have a kind of ideal nostalgic feel for a certain philosophy. But the more recent generations have shown us how it is important to think about money, position, power and have that choice to make.

Faizi is representative of one of the many generations who are making that choice. The food is an illustrative experience of the choice making. It was the medium. It is something every person relates to at the end of the day. We all, at some level, enjoy our food. It is not just a need, but also fulfills many things beyond hunger. It is a metaphor.

In Koode, I could not help but notice this beautiful relationship between brother and sister. The fraternal bond between siblings is also present in Bangalore Days. Is that subject a sentimental favourite of yours?

Well, these themes that emerge are still debatable. These themes all emerge in the writing, not a conscious decision. I also feel a lot of our movies are hung up on love and stuff. There are other relationships which are equally enriching and less explored on screen. It excites me to explore them.

What is your writing process like? Do you isolate yourself, or is there a particular way you go about it?

Writing is always a process I go through alone. I don't discuss much when I am writing. But it is not that I lock myself up. It is, however, a solitary journey. Not an inclusive one.

What else are you looking forward to this year? Are you writing or starting a new project?

I am writing. I have always been writing. Hopefully, in a couple of months I will have something that can go on to be my next project.