Working with Meghna Gulzar was in my bucket list: Raazi actress Amruta Khanvilkar


The actress, who played Alia Bhatt's sister-in-law in the film, is happy to be part of the Rs100 crore club.

But Meghna Gulzar's Raazi has been her biggest success so far. The film is not only receiving rave reviews, but has also reached the Rs100 crore mark at the domestic box office.

In an interview with Cinestaan.com, Khanvilkar spoke of her joy for the film's success. “It feels great," she said. "It is my first film this year. For someone from the Marathi [film] industry to feature in the Rs100 crore club is a big thing.” 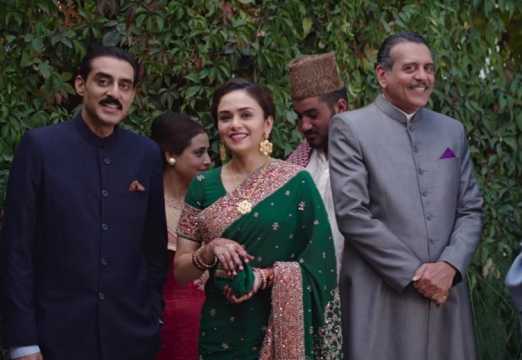 There is another reason that makes Raazi special for her. “I have never done a real-life story," she said. "It’s a true story which is told in such a subtle way. It is not about jingoism and patriotism, yet it is as patriotic as a film can get.”

Khanvilkar admitted that the film's team was not expecting such numbers at the box office: “We were confident that it will receive critical acclaim because of Meghna Gulzar. But the numbers had all of us surprised and pleasantly shocked. Marathi audiences went also because I am there. They feel a different kind of pride.”

The actress decided to be a part of the film the moment she learnt it would be directed by Meghna Gulzar. “The main reason was Meghna Gulzar. You can say she was my bucket-list director. I gave my audition and the next day Meghna ma’am met me and I was on board. I think that is what kind of lifted my spirits high. Plus, it is my first film with Dharma Productions,” Khanvilkar said.

The actress, who was also a part of Vishal Bhardwaj's Rangoon (2017), is glad that even supporting artistes got a good exposure in Raazi. “Alia [Bhatt] and Vicky [Kaushal] are definitely the protagonists of the film, but the secondary cast has also been appreciated. You always get to see this in a Meghna Gulzar film. The role kind of grew when I and Meghna ma’am sat to discuss the character. A lot of people ask me how I got the Urdu right. The credit completely goes to Meghna ma’am,” she said.

The role was also a challenge for her. “I had never played a Pakistani Muslim before, although I had played a Muslim in Katyar Kaljat Ghusali (2015). This was very challenging because I had to know the Urdu of that era along with the mannerisms because I am a very bubbly and cheerful person,” she said.

The actress also gave credit to veteran actor Sachin Pilgaonkar for getting her Urdu diction right. “The basic confidence was there because of Katyar Kaljat Ghusali. I had prepared with Sachinji. Urdu is his favourite language. He helped me a lot. He used to come for my dubbing,” she said.

Most of Khanvilkar’s scenes were with the protagonist, Alia Bhatt, and she is very impressed with the young actress: “She is one of the warmest newbies. She used to take care of everyone on the sets. There was a time when I was unwell. She used to come and ask, ‘Are you okay, Amruta? Do you have a running temperature?’ It’s commendable to see such a young girl showing such concern. This reflects her upbringing.”

Bhatt, according to Khanvilkar, also sent a hamper with a handwritten note to everyone. “There was no need of the gesture, yet she did it. The rapport was amazing. We played a lot of badminton,” she added.

The actress is happy to see the boundaries between Hindi cinema and regional cinema disappearing. “Marathi film stars are working in Hindi [films] and vice-versa. This is amazing. For example, Riteish Deshmukh and Shreyas Talpade have done well in both industries. Now even Madhuri Dixit [Nene] is working in Marathi [films]. I don’t feel actors should limit themselves to just one language,” she said.

Though Khanvilkar has completed more than a decade in films, she feels like she has just begun. “I feel the kind of roles I wish to perform have just started coming to me. When I did the song ‘Vaazle Ki Bara’, I didn’t know that it would make me famous. While doing Nach Baliye [dance reality show] I didn’t know we would win,” she said.

Asked about her forthcoming projects, the actress said, “I am doing a web-series with Hungama and [dialogue writer] Milap Zaveri’s film Satyamev Jayate with [director] Nikkhil Advani and [actor] Manoj Bajpayee.”

As far as Marathi films are concerned, she is currently reading scripts and will announce her next project in a month or so.