Still from Kshitij; (right) Vaishnavi Tangde
give your opinion

The curtains came down yesterday on the eighth SAARC Film Festival in Colombo, Sri Lanka, with some cheer for India, which bagged four awards.

Rahul Bose's film Poorna won the award for Best Screenplay for Prashant Pandey and Shreya Dev Verma. And GI, a short film directed by Kunjila Mascillamani, a former student of the Satyajit Ray Film and Television Institute in Kolkata, bagged the award for Best Short Film.

Kadaamh shared pictures of the award-winning moment and the two trophies. 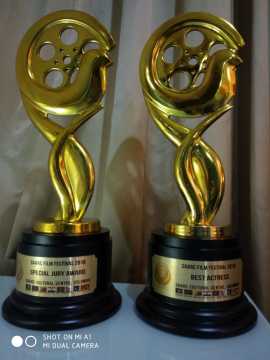 Kshitij: A Horizon was screened at the International Film Festival of India in Goa last year, where it won the ICFT UNESCO Gandhi medal.

The film tells the story of Vacchi (Tangde), a poor farmer's 12-year-old daughter who is keen on education but faces great obstacles in pursuing her right. The film touched upon the issues of girls' right to education and of farmer suicides.

The film was also screened at the Marche Du Film section at Cannes last year.