Felt 'Titri' song is going to be my best work till date: Priyanka Negi


The singer spoke to Cinestaan.com about her Phamous journey, how her YouTube channel helped her get work in films, and her time at Indian Idol 4.

Hindi cinema is incomplete without its song and dance sequences. However, of late films have suffered from the lack of new and meaningful lyrics. Folk and rustic music is now mostly limited to regional cinema.

However, the song 'Titri' from the upcoming film Phamous offers a respite. Directed by Karan Butani, the film is set in the Chambal region, an area notorious at one time for its dacoits. In keeping with the film’s theme, music composer Sundeep Gosswami has chalked out an endearing and fun song.

Penned by Puneet Sharma, 'Titri' is sung by the talented Priyanka Negi, who makes her debut as a playback singer with this number.

Negi is not unfamiliar with fame. She was in the limelight as a participant in the talent hunt Indian Idol season 4. Later, she began performing in live shows and launched her YouTube channel, largely singing covers and mash-ups.

The young singer is so popular in her state, Uttarakhand, that the Election Commission of India picked her as one of their state Icons. Negi is also related to shooter Jaspal Rana, who won gold medals at the 1994 Asian Games and the 1998 Commonwealth Games.

In a telephone interview with Cinestaan.com, Negi spoke about her Phamous journey, shared how her YouTube channel helped her get work in films, and recalled her time at Indian Idol 4. Excerpts:

Indian Idol got you fame, but it is 'Titri' that is likely to make you truly 'Phamous'.

I heard the audio song today and couldn't stop listening to it on loop. In times when most writers are looking for short-cuts and remakes, it is refreshing to have a song that is poetic, rhythmic and metaphorical. What was your reaction when you first heard the lyrics?

Not only the lyrics but the composition is great too. I felt that this is going to be my best work till date. I was sure about that.

The lyricist [Puneet Sharma] deserves all praise. I couldn’t stop laughing when I first heard the lyrics. The other antara is like, Saiyyanji ki mooch ko daiya bhaa jaave jo naari, Bhaa'n ko paane mein saiyaanji karde golibaari. So, a moustache has been appreciated and battered too.

Usually, our romantic songs make use of flowers, sea and the moon, but it’s not often that we hear about butterflies, fish, sparrows, moustaches, guns, all in one song.  Did you have a conversation regarding this with the lyricist?

No, I never met him. I just followed what was written. This song is on the lines of 'O Womaniya' from Gangs Of Wasseypur (2012) or 'Sasural Genda Phool' from Delhi-6 (2009). They appeal to people of all ages.

It's nice to see that despite writing for a Hindi film, Puneet Sharma has largely used the UP language. Often, the true rustic flavour is lost when too much Hindi is mixed.

Yes, I agree. Such language is spoken in areas like Chambal, Lucknow. It gives me immense happiness to share this word with the world. I’m glad with the response the song has got so far. In Hindi cinema, you need to have a different voice texture. I am just happy about the fact that [after listening to the song] no one has compared me with anyone. Everybody has been saying that you have a different voice texture. That will work for me in Hindi cinema.

How did you get this break?

I got a call from this talented programmer [named] Pankaj Bora. He asked if I can sing in [singer] Rekha Bhardwaj’s style. You need to bring a desi feel to it. You need to have a lot of expressions, you need to laugh, smile in between, without letting go of your sur-taal [notes]. I had never sung such a song, but I can give it a shot.

I went there, dubbed and luckily they loved it. They liked my expressions. I’m happy that finally the song is about to come out on 29 May.

You mentioned that you haven’t sung such a song before. How did you prepare for this song? 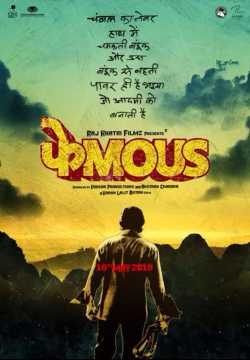 The composers asked me to listen to singers who have a folk-ish tone. I tuned into Rekha Bhardwaj tracks and a few others. While they were an inspiration, I didn’t copy anyone but performed in my style. I had to maintain the folk tone, bring out that desi feel in my voice texture.

And when you came to the recording studio what happened then? Tell us about that experience?

I was nervous but I surprised myself that the song was recorded in about an hour and half. I didn’t have to give too many retakes. It was almost effortless, came out naturally, for I was in that mood. I had the feel.

Now for such a delightful track, it’s surprising to see that there is no video of the song yet.  In a way that is good, for all the attention is on the singer and the composer's work, but I wonder, why would the makers not promote such a track better?

The response will be more once the music video is out, too. Honestly, I have no idea why the video isn’t out. All I know is that this song is being played out in a wedding. I assume ‘Saiyaanji’ is getting married and he is having his moustache and leg pulled. I think it is picturized on Jimmy Sheirgill and Shriya Saran. The song was recorded last year. It takes time for the songs to come out. We record much earlier, some times they never make it to the film.

Isn’t this your first playback song?

Technically yes, but I had recorded two songs before, I can’t recollect the movie.

You were quoted as saying that Indian Idol 4 changed your life.  It was aired in 2008. That's a long wait to get your first playback song....

Yes, it’s been a long journey. When I did Indian Idol, I was doing my graduation. So, I had to go back [after Indian Idol 4] to finish my graduation. I came back to Mumbai in 2011-12. As soon as I was back, I started doing events, live shows.

It wasn’t easy after coming back to Mumbai, because the fame that you achieve with a reality show doesn’t last long. My contract with Sony Entertainment Television was over one year after I left Indian Idol. So, I had to start from scratch. Slowly, I made a name for myself in the ‘live event’ industry. I have done more than 1,500 events. Guess I am reaping the rewards now.

I didn’t see Indian Idol 4, but I did watch an old video on YouTube, where I saw you defend your performance. One of the judges, singer-composer Anu Malik, said you can’t give excuses, but you stood your ground. Is that feisty attitude in-built?

No, what I said then was right. We don’t go too far on the stage. You are surrounded by the audience, but you perform to your track. When I sang, the audience was so loud that I couldn’t hear my track clearly. If I can’t hear it, then how will I follow the track and sing? After that I made sure that I didn’t go too close to the audience.

As a singer, how would you say you have changed from 2009?

I learnt a lot. I learnt how to interact, perform, I became a better artist. I am much more confident now while performing on stage. I wasn’t a trained singer before. I had first participated in Indian Idol 3. I had no formal training then and yet I made it to the top 40. There were three to five lakh people who had auditioned. To be one among the 40 selected was a big thing.

The music bug bit me hard after Indian Idol 3. I wanted to come back with a bang, with confidence. I had this madness, this belief, that I want to come back to the same stage. I took formal training from my guru, Anirudh Pandey, for a year. I knew that I had just one year to improve. I knew I was going to compete with people, many of whom have learnt singing from childhood. I practised 8-10 hours every day. I would bunk college. The same judges who didn’t select me earlier now picked me. Anu Malik recognized me when I returned.

Thereafter [after completing Indian Idol 4], I concentrated on my studies. In 2011-12, I participated in the Asian Wave [Chinese singing reality show] where I finished in the top ten. Here, I also sang in Mandarin. With age, your voice changes too. I started listening to more English songs. After Asian Wave, I came to Mumbai, and slowly began my career with live events, followed by launching my YouTube channel.

I see you have quite a following on your YouTube channel. You also danced in a few videos.  How vital have these videos been in getting you your desired opportunity in singing?

You are talking about 'Shape Of You' and 'Mera Laung Gawacha'. I did a few moves in them, but not the others. The 'Shape Of You' mash-up got great views. I never expected over 2 million people to watch it. After that I started doing covers. Naturally, if they click, you get noticed. Meet Brothers had called me after watching the 'Maana Ke Hum Yaar Nahi' cover. My voice texture was husky there. I started getting calls from music directors. So I can say that it really worked for me.

You are a cousin of noted shooter Jaspal Rana. I believe he introduced you to shooting. Can you tell us about that?

Well, if I was not a singer then I would have been a shooter. I practised in college. I took a bit of training from Jaspal. He encouraged me a lot. I played at the state level. Of course, I couldn’t continue once I opted for singing. I dedicated three years to it. However, as a child I was always interested in sports, be it cricket, tennis, badminton. Indian Idol came and I left these. My younger sister Renuka is now preparing for the Nationals.

I was born in Dehradun. My father worked as a senior geologist in the Oil and Natural Gas Corporation. So, I have lived in many cities. From first to fifth class, I studied in Rajahmundry, Andhra Pradesh. The next five years I studied in Dehradun. Then I spent two years in Agartala, Tripura. I graduated from Shri Ram College, Delhi, in commerce. Having stayed in different cities, it exposed me to different cultures. I know a little bit of Telugu, Bengali. I stay with my younger brother in Mumbai.

After Phamous, what next for you?

There are lots of songs in the pipeline. We record songs and then just wait for a year for the release. Sometimes, the wait is longer.