Whenever you feel a character is easy, it is actually difficult: Actress Chhaya Kadam of Nude, Redu


In an exclusive chat with us, Kadam spoke about her acting, unusual entry to the film industry, the experience of shooting a bold film like Nude and why she wishes to move out of her image.

Chhaya Kadam has a commendable filmography to her name - Fandry (2014), Sairat (2016), Wagherya (2018), Nude (2018), and Redu (2018). In all of these films she essayed the role of a woman from the rural areas. She has made her characters believable with her realistic rural mannerisms. In the recently released Redu, too, she plays a Konkani woman. However, one would be surprised to learn that the actress is born and brought up in the city of Mumbai.

In an exclusive chat with us, Kadam spoke about her acting, unusual entry to the film industry, the experience of shooting a bold film like Nude and why she wishes to move out of her image. Excerpts.

You always wanted to be an actress?

I hadn’t decided it before. I kept doing whatever came my way. I used to perform in school gatherings and also play Kabaddi. Once, I had gone for an audition for a play in college but I didn’t get selected. They said they are not selecting juniors as they would require to stay late. I continued playing Kabaddi. I kept doing plays in between but didn’t think of making a career out of it.

When did you decide to go into acting?

Once, I had some family problems and would be tensed. This is when I saw an ad by Waman Kendre for a theatre workshop. I used to think only good looking, tall and photogenic people could become actors. A lot of people still think this way. But after attending the workshop I realized this is not true. One requires a lot of hard work. You need to work on your language, body language and read a lot. Looking good is not all.

Kendre sir used to shout at me for my language. As I am a Konkani, I had a problem with the letter ‘na.’ I used to feel what is wrong in that? Later when I learnt the correct pronunciation, I found it interesting. I started learning new things through him.

Luckily, he gave me my first chance in his first play, Durva. During the 5 to 6 month-long rehearsal I got to learn more as the play was very different. Milind Shinde, who is my friend now, was my co-star. He was the only actor who used to be so busy. His and sir’s rehearsal process also taught me a lot.

I kept meeting good people. My first film was by Arun Nalawade called Baimanus, which wasn't released. I had a very interesting character in it. It was based on Kavita Mahajan’s novel, Brr. It won an award. I did a short film Vitthal which got a National Award. I just kept liking offbeat kind of films and I kept getting such films. And now I am addicted [laughs].

You became known after doing Nagraj Manjule’s Fandry (2014). I heard that the producers initially wanted a known actress to play Jabhya’s mother.

Almost every producer feels that way [laughs]. No actor arrives with fame right from the beginning. Everyone is new at some point. They wanted someone famous so that it could help the film.

So how did you get that role?

I guess they had Seema Biswas in mind. But Nagraj had me in mind from day one. We didn’t know each other but he had seen my short films. He was sure that I would be different than the others, so he was firm on my name. But as he was also new then, his word didn’t carry much weight. But Seema Biswas got busy in something else.

Then Mitali Jagtap got the National Award for Baboo Band Baja (2012), which also starred me, so they thought of her. Although Nagraj was firm with me, they decided to go ahead with Mitali. But 5-6 days before the shoot at the look test she felt she wouldn’t be comfortable playing an aged character.

Nagraj was so smart that he told her that if you don’t feel like doing, you shouldn’t do [laughs]. The same night he called me and asked to meet to discuss the film. I couldn’t have been choosy then. He narrated the one liner and I said yes.

You also did Sairat with Manjule. He is known for being too talented. What was your experience with him as a person?

All are able to see his talent now. But he is kamaal [wonderful] as a person. He has seen whatever he has shown so far in his films. He has seen the same characters. Actually, it is very easy to work with him. I consider myself lucky that Seema Biswas got busy and Mitali backed out, not just because I got the film but also because I got a friend like Nagraj.

He also teaches us how to live life. It all happens through his behaviour. There are quite a few people in the industry who make films on farmers suicides but actually they don’t care about it.

Your performance in Redu is being appreciated a lot. It was a challenging character but I guess the language part wouldn’t have been a challenge since you speak Konkani at home.

No, it was not. I speak in Malvani at home with my mom. I keep visiting my native place in Konkan, especially during Ganeshotsav. They were mill workers and Malvani speaking people at the place I used to stay before.

What were the real challenges in Redu?

Someone like Shashank Shende was my co-star. Others were local actors. We might think they are just local actors but their performances are so real. I feel fortunate to have worked with new people and learn.

Even if I know the language, every character is different and has a distinct journey. My character in Redu had a different attachment with my husband. She observes how he turns childish after he gets hold of the radio. Later, when she wants her husband to remain this way, his behaviour again changes after he loses the radio.

When we feel a character can be easy, it is actually difficult. An artiste is paid to act. But in such films, you are not required to act. It should look absolutely realistic. This was one challenge. And quite a few times we had to change the location but we always kept ourselves ready for it.

Shashank Shende is a highly talented actor. How was your rapport with him in your first film with him?

He is wonderful both as an actor and human being. Before this film, I had a chance of working with him 3 or 4 times. But due to some reason or the other, it kept getting cancelled. When we were cast in Redu, we used to wonder jokingly if we would finally be working together.

He puts in so much of hard work. He couldn’t even read Malwani language on the first day. We find it easy but it’s certainly not easy. So, he met some Konkani friends and also stayed in Konkan to learn it. In the second meeting I realized he had learnt 70% of it! Today, if you see the film you would feel even he is from the Konkan region. He has played the character that well. 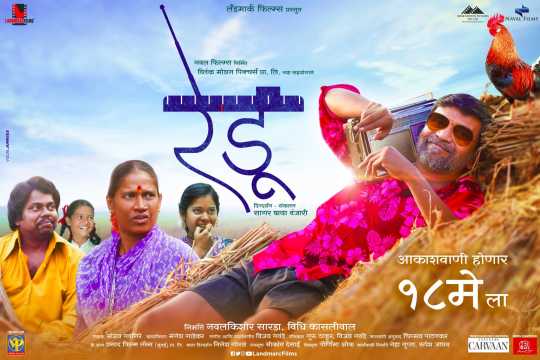 I gel with few actors with whom I keep chatting. I generally keep with myself. But my thoughts matched so much with Shashank that we kept sharing even little things related to work. He used to listen even when I gave inputs. We also used to suggest books to each other. Now, people have been saying that our bonding looks good in the film. I would like to work with him again and again.

After watching you play rural characters on screen, it is difficult to believe that you are based in Mumbai. How do you get into the characters so well?

Well, it is mostly because of some learning and practice. And maybe because I speak Konkani at home, although I am born and brought up in Mumbai. So, such characters comes off well. I have played quite a few rural characters by now.

Tell us about your upcoming films...

I am doing Sujay Dahake’s film which was earlier titled Kesari. They will change the name now because Akshay Kumar’s Hindi film is also called Kesari. I am also doing Sriram Raghavan’s next. It is tentatively titled Shoot The Piano Player.

Do you aim to regularly work in Hindi films now?

I am ready to work in any language, be it Hindi or Malayalam. I just want to work, be it theatre, movie or television. Now I feel like doing something different. Look-wise also it should be completely different. I also want to test myself by doing it. I keep getting calls where people express that they wish to see me in a different avatar. It is not in my hands though. Directors and producers should feel that way.

So, right now I am in search of something different, be it action or comedy.