On the largely forgotten composer and singer's 25th death anniversary, we revisit a song from the album of Bilwamangal (1954) composed by him and sung by Suraiya.

Composer Bulo C Rani, whose full name was Bulo Chandiram Ramchandani, shortened it for the big screen. He began his musical career as an independent composer with Caravan (1944), but earlier he assisted Gyan Dutt and Khemchand Prakash on Paigham (1943) and Tansen (1943).

Bulo C Rani, who was born on 6 May 1920, hailed from Sindh, then a part of the Bombay presidency and now in Pakistan. When he arrived in Bombay city, he began working with Ranjit Movietone, struggling as an assistant. His big break came with Caravan (1944). He also sang songs in films like Pagli Duniya (1944) under the name Bhola.

In his three-decade career, Bulo C Rani is mostly remembered for his beautiful compositions from the Dilip Kumar-Nargis starrer Jogan (1950). His most popular song is likely ‘Humein Toh Loot Liya’ from Al Hilal (1958). But there are other contenders.

One such contender is the solo number 'Parwano Se Preet Seekhle' from the 1954 film Bilwamangal. This was the last film directed by DN Madhok, who also wrote the story and lyrics for his film. It was Madhok who had first brought Rani to Mumbai. The film turned out to be his last big and important soundtrack. It consisted of 12 songs.

Starring Saigal soundalike CH Atma, Suraiya, Asha Mathur and Ullhas, Bilwamangal told the fateful story of the unfulfilled love story between Bilwamangal (Atma) and Chintamani (Suraiya). The already married Bilwamangal falls for the courtesan Chintamani and her alluring voice. His wife Rambha (Asha Mathur) tries to win her husband back, but is unsuccessful.

Bilwamangal’s father, too, tries to convince his son to honour his marriage before Bilwamangal gets miffed and leaves home. His father dies in his absence.

Blinded in love, Bilwamangal returns to Chintamani. However, she tries to reason with him and asks him to open his eyes to the reality of their situation. The culmination of many tragic events forces Bilwamangal to pledge his life, and his music, to the god Krishna. 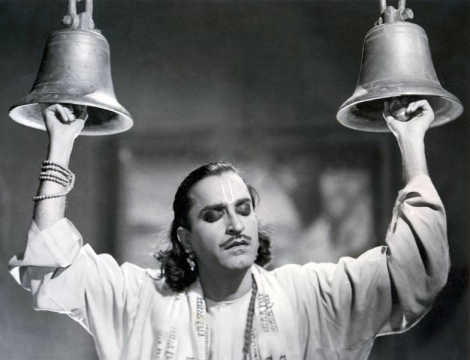 Suraiya, who looks effortlessly stunning as Chintamani, sings the evergreen song 'Parwano Se Preet Seekhle'  in the film. The actress first entered the industry as a singer and became an overnight star because of her mastery over both singing and acting. Suraiya was untrained in music, but remained at the top of the list for most music composers.

Here, as the other woman, she sings with feeling of the epic love story between Bilwamangal and Chintamani. Bulo C Rani’s composition is enjoyable, adding a touch of melancholy to the bittersweet union.

Interestingly, in an old radio interview, the actress had revealed the behind-the-scenes excitement that went on when she was making Bilwamangal. In a sweet musical manner, she told listeners the story of how she met Hollywood star Gregory Peck.

Suraiya had been shooting for Bilwamangal (1954) when she came home at night, tired and sleepy. At around midnight, she was awakened by her mother to receive Peck at their house. The actress had written the star a letter which was carried to him by filmmaker Frank Capra, who had visited Bombay earlier.

When news of Peck visiting Suraiya made headlines in the newspapers the next day, the happy actress was filming this very song from Bilwamangal.

Bulo C Rani died by suicide on 24 May 1993. His musical career ended in the 1970s and he occasionally participated in All India Radio programmes.