The actors had reportedly criticised inflation in fuel prices when the Congress government was in power, but have chosen to remain silent on the issue under Bhartiya Janata Party's ruling.

After being pulled up for auctioning his uniform from the film Rustom (2016), Akshay Kumar is again in the news for deleting a six-year-old tweet that criticised the inflation in fuel prices.

As the petrol and diesel prices have gone several notches higher in the past few days, many Twitter users have questioned his silence on the issue now. In response to this criticism, the actor chose to delete his old tweets. 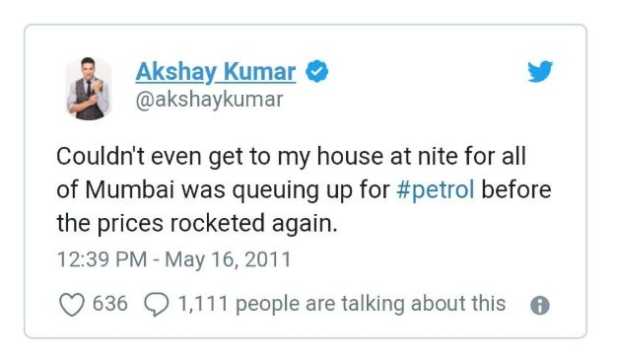 However, a number of users had already taken screenshots of those tweets and are now circulating them.

Akshay has enjoyed a good rapport with the ruling Bharatiya Janata Party (BJP) government ever since it came to power in 2014. This is being touted as the reason for his silence. 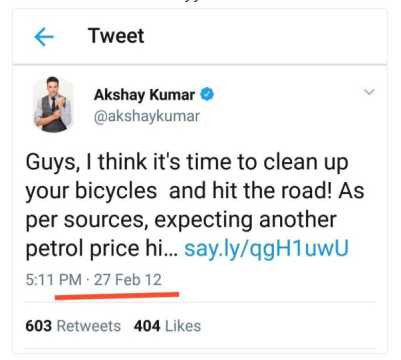 Similarly, old tweets of veteran actors Amitabh Bachchan and Anupam Kher, where they had openly criticized the rise in fuel prices during the Congress ruling, have also resurfaced. Both actors, who have openly supported the ruling party, have remained silent on the issue now.

Earlier this month, actor Prakash Raj had criticized Bachchan for refusing to speak about the Kathua gang rape case. “When artistes become cowards, we will become the reason for the society to become coward,” Raj told a newspaper.

The ABVP Pracharak , Canadian Citizen , Padma Shri @akshaykumar Has Deleted His Tweet Regarding #Petrol Price Hike .. Request Him To Re-tweet it back As We Have Reached At Highest #FuelPrice Now .. Or is like 'sarkar ka chakkar babu bhaiyya' .. ! pic.twitter.com/XZmdqc3yJC

This is really not fair @akshaykumar sir. Recently i seen your tweet from 2012 about petrol price. At that time the price of petro is â¹ 75 litre and now it was â¹ 84.7.#FuelPriceHike #akshayKumar #diesel #Petrol #FuelPriceHike #FuelLootBySuitBoot

Celebrities who couldn't afford fuel prices in UPA regime can suddenly do so. Did #Padman really earn so much?@akshaykumar #AkshayKumar #FuelPriceHike