The Raazi actress joined the superstar to help in the state government's water conservation project.

Over the past couple of years Aamir Khan has been actively supporting the Maharashtra government's water conservation programme. Khan and his team of the television programme Satyamev Jayate launched the Paani Foundation as part of that endeavour. And the superstar has been getting support from the film industry, too.

Now rising star Alia Bhatt has lent her weight to the cause by turning up in Latur on Labour Day (1 May) to help Khan in his endeavour.

Seen above is Bhatt aiding Khan to dig a rainwater well in the drought-hit region of Maharashtra. 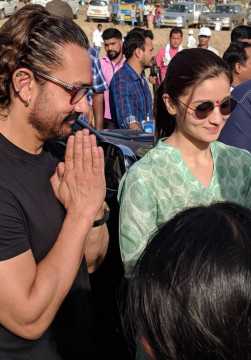 Bhatt will next be seen in Meghna Gulzar’s Raazi that is set to be released on 11 May.