Want world cinema to get validated to a larger extent in India: Aneek Chaudhuri


In a candid chat with us, the independent filmmaker and film theoretician discussed his aspirations and noted that the Indian audiences and producers still do not welcome him as those in foreign countries do.

Independent filmmaker and film theoretician Aneek Chaudhuri is no stranger to international recognition. He has received accolades for his debut short film and his feature films Streer Potro (2016) and White (2018) have also had screenings at Cannes Film Festival, Hamilton Film Festival and the Reaktor Indian Film Festival in Vienna.

The director has studied and gained extensive expertise on the field of linguistics from prestigious institutions, including Stanford University and University of Cambridge, and has taught at the latter as well.

A cinema lover at heart, Chaudhuri intends to serve the medium and cares little for recognition. His latest film, White, is a unique take on the universal issue of rape. The silent film was screened in the Marche Du Film section of Cannes this year.

In a candid chat with us, Chaudhuri discusses his aspirations and says Indian audiences and producers still do not welcome him as the foreign countries do. Excerpts.

How does it feel to receive international recognition at such a young age?

Well, I am here to serve the medium of cinema. It is good for the entire team, they are enjoying the moment. But getting awards and international recognition is really not my goal. I have rather a long term purpose. I am basically working to eradicate the importance of language in films. I have seen people not feeling comfortable watching world cinema just because they cannot synchronise with the subtitles running below.

I want to make sure that the term 'world cinema' gets validated to a larger extent. It might take another 10 to 15 years when a French or an Italian film is broadcast on a Bengali channel and the audience finds it easy to decode the cultural background or the emotions inherent in the film. Till then, I will be humbled by all the accolades which are the tokens of encouragement for me and my team as well.

So how did this idea come to you? How do you propose to overcome the language barrier in films?

Well, I was born in Kolkata. My father had a transferable job. First, we shifted to a small town in Jharkhand, then to the infamous town of Bahadurgarh in Haryana. When I reached Delhi, I used to watch two [television] channels — UTV World Movies and Lumiere Movies.

Initially, as a small-town boy, I used to feel alienated in the bigger stratum of life in Delhi. However, watching films in those channels helped me forget all my materialistic concerns.

I realised that world cinema is such a medium that can give relief to audience from any part of the world, irrespective of their background — whether they are from a small town or caught up in the 9-to-5 tedious job affair. I wanted to channelize the same feeling of relief towards others by making films.

White is just an elementary step towards my goal. Today, when my film is being shown in Austria or France, the audiences are able to get an experience of what is happening in India or its cultural background.

The silent medium is a conditioning method for them to understand my message that is embedded in the film. I do not literally mean to eradicate the use of language, I wish to make journey towards creating a medium that will be easily accessible to the audience from any corner of the world.

You were in the corporate sector and left the job to pursue your passion for films. How difficult was the journey?

Yes, I worked in the corporate sector and wasted two years for the sake of earning money. During that time, I used to avoid watching good films because I could see that good films were being made and I was doing nothing for cinema.

Gradually, I realised that I could no longer waste time. I quit my job and shifted my focus to films. I worked as a content writer for a small company for sustenance.

Did you study the technicalities of filmmaking?

I studied film direction from CRAFT Film School, Delhi. After that, while pursuing my job, I was also into film appreciation and film criticism.

Around 12 or 13 research papers under my authorship have been published around the world. In fact, it began as I critiqued and rejected the idea of a director being the owner of a film, that was proposed by famous [French] film critic André Bazin and filmmaker François Truffaut. Yes, I was familiar with both the technical and the theoretical aspects of filmmaking.

How did the first film happen?

I made my first short film in the beginning of 2011, when I was quite fascinated with French films and the colour theory by Krzysztof Kieslowski. I should also mention that the colour theory has actually shaped most of my ideas.

I hired a camera from the baratiwalas in Delhi. I shot a 6-minute-film based on a dream, titled ‘Congested Harmony’. That was a bad film. In fact, one of the worst films I have ever seen in my life.

I seriously have no idea how it got selected in the short film category of Indian Film Festival of Melbourne. Later, when my friends used to ask me about the film, I used to tell them that I had broken the DVD.

That is how my journey began. I feel that one should consider one’s previous works as ridiculous, otherwise one cannot grow or improve as an artist.

Then after a break of four years, I made a film on urban folk singer Susmit Bose, titled ‘Urban Voice’ in 2015. Though it was screened in a filthy auditorium, few important personalities associated to films watched and appreciated it. The film was important for me as it exposed me to the film scenario of Kolkata.

Then actor Kaushik Roy contacted me and expressed his wish to work with me. I was then conceiving the idea of Streer Potro or The Wife’s Letter. I informed him that I did not have the budget to cast him in my film. He said that my film won’t stop for any monetary reason as he was willing to invest in it too!

So, for the next few months, I locked myself up and completed the script of Streer Potro. I came to back to Kolkata and shot the film and never went back to Delhi.

Streer Potro did well, surprisingly. It was screened at the market section of Cannes and in Hamilton Film Festival. British Council enlisted it too. It was bought for five foreign territories by Amazon.

Very soon the film will be released in France in French. I still don’t know why Indians don’t love my film!

While I was attending the Cannes Film Festival, I thought of making a film with my own production fund. I had been musing the idea of making a silent film, because silence can create the most impactful sound or noise.

I was brought up in Delhi, and I have seen how it becomes quite a threat for women to go out in Delhi at night. Being a brother and now a husband, I felt quite insecure thinking about the issue of rape in India. Then the incident of Nirbhaya also took place. Therefore, I concentrated on the issue of rape and thought about making a silent film.

But I did not want to gain sympathy for the victims; I wanted to project them as more powerful. According to me, women, who have been victims of rape can stay traumatized for months or a few years, but they eventually bounce back, instead of giving up. I wanted to present this thought and hence, made White.

I came across a disclaimer in Streer Potro claiming the audience cannot expect entertainment from the film... Why did you write that?

(Laughing) Actually, that was a result of being a student of a film school and being surrounded by film enthusiasts. I feel that Streer Potro was quite an egoistic attempt; I should not make such a film again.

Claiming to be a Ritwick Ghatak fan and then making a film like Streer Potro, which was essentially not meant for a larger audience, was quite superficial of me.

I think White has made me more responsible. Now I think that when I am making a film with producers investing in it, I should make film for people, not for myself. I guess, stating those words was a very childish attempt to seek importance in the festivals. But now I feel that my duty is primarily to entertain in my own way, be it a niche audience or the masses.

What are your upcoming projects? 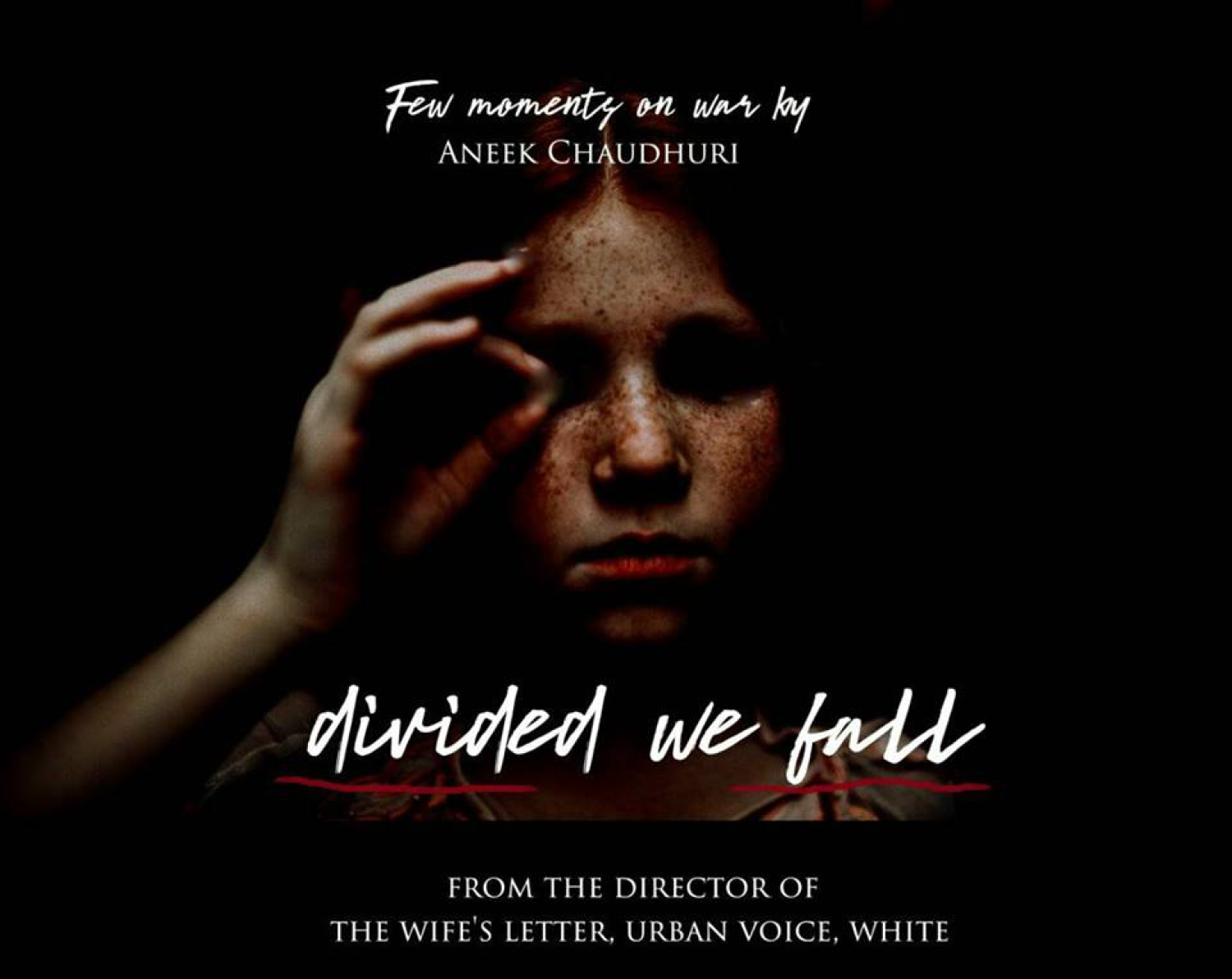 Well, the problem is that I have got no help from Bengali producers so far. White is an amalgamation of three stories. The first two are produced by me and for the third one I received assistance from Delhi's La Artiste Productions.

I have musicals in mind, one of them is a thriller and the other will be a big-budget feature film. I am also going to start shooting for my short film, Divided We Fall, next month. It will be a tribute to the victims in Syria.