At 58, the actor found resurgence in his career when he starred in the family drama which was released on 5 March 1968.

In Hrishikesh Mukherjee’s 14th film as director, he cast Ashok Kumar as the lead character in an emotional film on a principled man who chooses estrangement with his daughter as penance for a crime. The result was a sensitive film about the close bond between a father and daughter which won honours both at the Filmfare and the National award ceremonies.

Ashok Kumar plays Shivnath Chaudhary, known lovingly as ‘Jogi Thakur’ by the villagers of Chandanpur. A ghar jamai, he is married to Leela (Veena), a zamindar’s daughter, who is money-minded and often cruel towards her tenants. Shivnath and Leela are as different as chalk and cheese in their methods; they have a young daughter, Neena, nicknamed Bittu, who shares her father’s love for the arts. 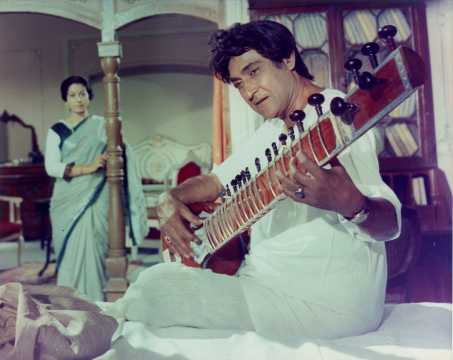 Instead of running the estate, Shivnath, or rather Jogi Thakur, can be found mingling with the tenants and the villagers. A poet and budding singer and musician, he loves to learn from wherever and whomever he can. Baiju (Harindranath Chattopadhyay), a lower-caste man, becomes his music teacher.

The disapproving Leela has the lower-caste section of the village burnt for petty reasons. Shivnath leaves her after a quarrel, with a heavy heart since he has to part with Neena. In the city, he earns a living by making young children in the park happy with his creative songs, including a little girl named Neena (Baby Sarika) who reminds him of his own daughter.

When he returns to Chandanpur, he finds that Baiju’s daughter Rukmini has been kidnapped by the evil munimji (Sajjan). He goes to bring her back and, in a fit of rage, kills the munim. Many witnesses come to his aid, but Shivnath admits his guilt and is imprisoned.

Young Neena is told her father has become a sanyasi and she grows up to become a singer and artist. In a twist of fate that usually occurs in Hindi cinema, Neena’s fiancé Biren occupies the position of doctor at the prison where Shivnath is kept. Years overdue, father and daughter finally have their hard-earned reunion, but it is bittersweet and tragic. 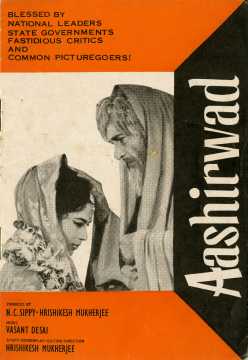 Aashirwad’s story and screenplay were written by Hrishikesh Mukherjee himself, but the dialogues were written by Gulzar. The film pays tribute to two stalwarts of Indian cinema, BN Sircar, founder of Calcutta's New Theatres, where Mukherjee got his start under Bimal Roy, and V Shantaram, from whose 1957 film Do Ankhen Barah Haath the second half is inspired.

Like the landmark 1957 film, the prison in Aashirwad is run by an idealistic jailor (Abhi Bhattacharya) who does not believe convicts should be behind bars and thinks they deserve a second chance in life. Both films had the same music composer, Vasant Desai, who brought his vast knowledge of classical music to Aashirwad.

Harindranath Chattopadhyay and Gulzar shared the credits for lyrics on the soundtrack. The film is known for the song ‘Rail Gaddi’, said to be India’s first rap song of sorts, written by Chattopadhyay and sung by Ashok Kumar. A singing star of the 1930s and 1940s, Ashok Kumar sang again after a long break in Aashirwad. His younger brother Kishore Kumar was known as the singer in the family, when it was actually Ashok Kumar who created a path for him in the industry.

The film has many musical interludes, from a sing-off after a lavani performance and a classical lesson between Baiju and Shivnath to the delightful story-song ‘Naav Chali’ which is depicted on screen with drawings and animal cutouts for the amusement of children.

The film’s cast, comfortable in a Mukherjee screenplay, fit their roles perfectly. Ashok Kumar and Veena were paired opposite each other in BR Chopra’s directorial debut Afsana (1951). Here they are cast together as two headstrong individuals. 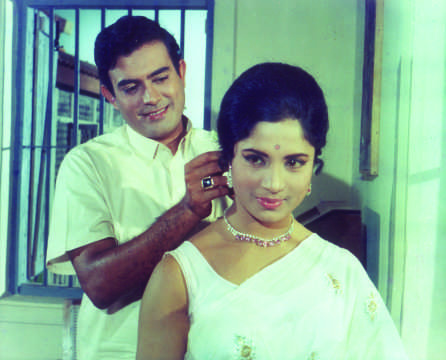 Other standouts include Chattopadhyay and Abhi Bhattacharya as the genial jailor. The young couple Neena (Sumita Sanyal) and Biren (Sanjeev Kumar) don’t show up until more than half the film has passed.

That’s fine, because the film belongs entirely to Ashok Kumar. The veteran won both the Filmfare award and the National award for Best Actor. At 58, he was relegated to supporting roles, but he got a last hurrah as the male lead again with Aashirwad. Later, he and Mukherjee reunited to work on classics like Guddi (1971), Mili (1975) and Khubsoorat (1980). 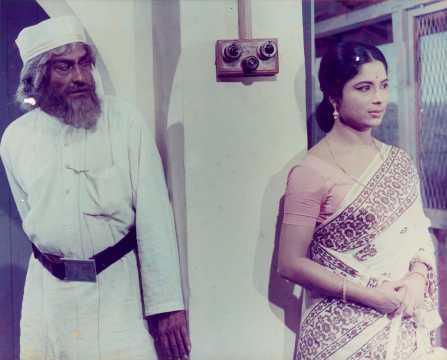 In Aashirwad, as the honourable Shivnath, he must pay the price for his actions, even if it means separation from his beloved Neena. His goodness influences all those around him and they seek his aashirwad (blessings) in their lives.