20 years of Pyaar Kiya To Darna Kya: 5 reasons why the Salman-Kajol starrer is remembered


This was the film that made Salman Khan popular as a shirtless star.

Salman Khan made his Hindi film debut in a supporting role in Biwi Ho To Aisi (1988) and became popular after his second film, Maine Pyar Kiya (1989), his first role as leading man, became a blockbuster.

But it was only a decade later that he began to be acknowledged as a superstar. And the trend began with younger brother Sohail Khan’s directorial Pyaar Kiya To Darna Kya (1998), in which Kajol was his leading lady.

Also starring Salman Khan’s other brother Arbaaz, the veteran Dharmendra and Anjala Zaveri, the romantic entertainer became an instant rage with the youth.

PKTDK turns 20 years old today (what? really?) and we list five reasons why it clicked for the 1990s generation. 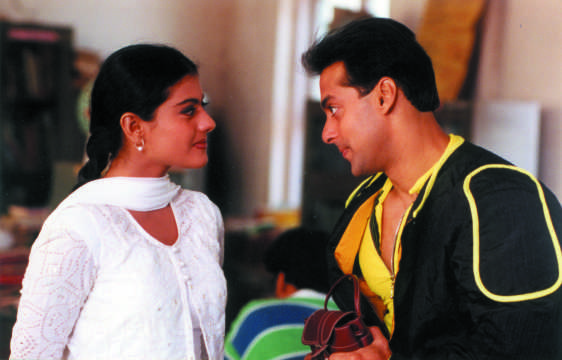 Interestingly, the two were cast opposite each other again that same year in Karan Johar’s blockbuster Kuch Kuch Hota Hai (1998). However, since then they have never starred together, though both made cameo appearances in the title song of Shah Rukh Khan's Om Shanti Om (2007).

PKTDK wasn’t great cinema. Even the plot of a guy falling for a girl and facing opposition from her strict older brother was not novel by any means. However, the film worked at the box office as it provided non-stop entertainment. Clearly, director Sohail Khan knew what he was doing. The film had an engaging screenplay that had something or the other happening all the time to keep the audience interested and entertained.

What kept the entertainment alive was some fine comedy in a number of scenes. Apart from the situational humour, the film had a couple of funny sequences that stood out. One such situation came when Kajol’s character was forced to play Salman Khan’s mother before the school principal. The way they said ‘Maa... Munna... Principal ko laga diya chunna’ had the audience in splits. And who can forget the cricket match in which Salman Khan’s team fixes the game? Or the funny background score every time an obviously gay fielder appeared?

Every era has its share of hit songs that become anthems for the film-going public. The 1990s boasted of a host of such songs. One of them was ‘O O Jaane Jaana’. The song, written by Shitala Pandey, became an instant hit, much before the film's release. Singer Kamaal Khan too became an overnight sensation.

If mobile phones had been as ubiquitous then as they are today, the guitar riff by composer duo Jatin-Lalit would certainly have been set as a ringtone or caller tune by a large number of users. After the film's release, Kamaal Khan released a single titled 'O O Jaane Jaana' but with different lyrics.

Today, Salman Khan is almost synonymous with shirtless scenes. Though Khan had appeared topless on screen before PKTDK, it was this film that made this avatar famous in the song ‘O O Jaane Jaana.’ In fact, the scene became a superhit even before the film hit the theatres. Talk of PKTDK without mention of this moment is meaningless.

Even today, a film starring Salman Khan has to have a scene in which Bhai, as his fans call him, takes his shirt off. The only shirtless Salman scene that can be said to rival the one in 'O O Jaane Jaana' was the climax in Dabangg (2010), which revived his superstardom. In films like Ready (2011) and Ek Tha Tiger (2012) such scenes were added almost compulsively.