On the auspicious occasion of Rakshabandhan, the quintessential song excavated from the annals of Hindi film history is 'Bhaiya mere rakhi ke bandhan ko nibhana' from the film Chhoti Bahen (1959) featuring Balraj Sahni and Nanda as brother and sister. Actress Nanda may not always be remembered among the legion of stars of her generation; she nonetheless left an indelible imprint in the history of Hindi cinema.

Born Nandini Karnataki, eldest daughter of actor-filmmaker Master Vinayak, she lost her father at an early age and entered the world of films as a child artiste, Baby Nanda. Fending for her family, Baby Nanda started out with child roles in Marathi films.

At the age of about 15 or 16, her maternal uncle, the ace filmmaker V Shantaram, offered her a role in his film Toofan Aur Deeya (1956) opposite Rajendra Kumar. The film about orphaned siblings who face several challenges and are guided towards spiritual enlightenment did not fare very well at the box office, but it gave Nanda a solid break.

She then appeared in some lacklustre films like Sakshi Gopal (1957) and Laxmi (1957) before the big hit Bhabhi (1957), an AVM production starring Balraj Sahni. The film won her a Filmfare award nomination for Best Supporting Actress.

Nanda went on to do another AVM film Barkha (1959) with Jagdeep, followed by Naya Sansar (1959) with Pradeep Kumar and Jayshree and Pehli Raat (1959), amongst several others, mostly playing supporting roles at the time. But in the same year, 1959, two of her films gave Nanda tremendous recognition — Dhool Ka Phool, directed by Yash Chopra and produced by BR Chopra, and Chhoti Bahen. 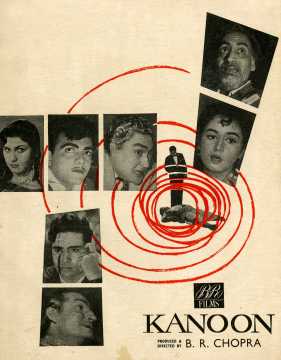 In an interview, actress Waheeda Rehman recounted meeting Nanda while working together in Kala Bazar. It seems Nanda had seen Waheeda Rehman at an earlier event and smiled at her, but the actress did not notice or acknowledge her gesture. However, unaware of the apparent rebuttal, Waheeda Rehman asked Nanda to have lunch with her, which soon sparked off a friendship that endured the test of time.

A hard-working and dedicated actress, Nanda was enthused over the film Nartaki (1963) as she had always wanted to learn dance, and an opportunity presented itself in the form of her role in the film. Besides, her close friend Waheeda Rehman was an excellent dancer. So, Nanda played a courtesan who wants to improve her lot in life by getting an education. She is aided in her endeavour by a professor, played by Sunil Dutt. With Saroj Khan as the dance assistant and the legendary Sohanlal as the choreographer, Nanda gave an excellent performance in the film.

Drawing attention to Nanda's good nature and kind heart, film historian and memorabilia collector Zafar Aabid Balani pointed out that when Shashi Kapoor was starting out in his film career, several heroines had rejected the idea of working with him. This was because his first film Dharmputra (1961) had flopped and heroines did not want to jinx their luck. But Nanda did not bother about it and thus the film Char Diwari (1961) featured the two in the lead. They went on to star in eight films together, including the superhit Jab Jab Phool Khile (1965), in which Nanda played her first Westernized role, thus shedding her traditional image.

Her gentle nature is highlighted in a conversation that Balani once had with filmmaker Phani Majumdar who spoke of Nanda's innocence as he observed her while shooting Aakash Deep (1965). As the director explained a scene where co-star Dharmendra was to approach her as if to kiss her, Nanda felt shy and walked away. According to the filmmaker, she was even unable to say the word "kiss"! Balani said, "While this is a small thing, it shows you Nanda's shyness and sheer innocence."

Recalling another incident, Balani highlighted another endearing quality of Nanda's. The film Jo Hua So Bhool Ja (1960) was a bilingual, shot in Hindi and Marathi (Zhale Gele Visrun Za, released in 1957). The director, Yashwant Pethkar, signed the rising Marathi comic leading man Raja Gosavi for the film. As it happened, Gosavi had once served as a kind of nanny to Nanda when she was a little girl, as he was employed in Master Vinayak's household staff.

While most people would have shied away from working with their one-time nanny as a co-actor, Nanda had no such qualms. Balani said, "She said we are both artistes and I have no problem working with him. He had taken care of me as a child after all, for which I am grateful!"

Such incidents show her generous nature, rare in a star from the film industry.

There were no rumours of link-ups with co-stars or any gossip surrounding Nanda, who did not marry and chose to take care of her family instead. According to Balani, it was Waheeda Rehman who urged Nanda to set up her own home and thus she got engaged in her fifties to the filmmaker Manmohan Desai. Tragically, the latter died before the nuptials could take place and Nanda remained single till her death on 25 March 2014.

With little difference between her on-screen and off-screen personality, actress Nanda will always be remembered for her innocence and gentleness in an industry that seems to reward the bold more than the kind-hearted.