Studio Eeksaurus on Tokri: We had to revive clay animation


The animation studio behind several award-winning short films and ads spoke to us about their latest short film, Tokri, and the new promo about the spirit of the island city titled Mumbai Buzz.

One of the highlights of the 15th Mumbai International Film Festival (MIFF) was attending the screening of the short film Tokri (The Basket), produced by Studio Eeksaurus. The heart-warming short about a father, daughter and a precious watch went on to win the best animation film, the Silver Conch award at the festival this past January.

It came as a pleasant surprise that the signature film of this year’s MIFF was also created by the team at Studio Eeksaurus. A 50-second ode to the maximum city, the short captures the real essence of Mumbai — gritty, fast-paced and overwhelming (in a good way!).

Cinestaan.com visited their cheerful Santacruz studio last month to know more about the making of both projects. Shelves teeming with awards decorate the entryway of the Studio Eeksaurus; I presume the latest honour from MIFF is also in there somewhere. The creative team of Suresh and Nilima Eriyat spoke to us in their office, where an adorable beagle slept blissfully in the corner, about the joys and struggles of making a film in animation.

The unusual name, Eeksaurus, originated from Suresh’s days at National Institute of Design (NID) where he was nicknamed Eeks the dinosaur tyrant, infamous for ragging the freshers at the institute. "So we just extended that to Eeks the dinosaur, and the name stuck. A lot of times, our own people couldn’t say Eeksaurus," Nilima said.

“If you do very well, people will talk about it, and remember the name, no matter how difficult it is to pronounce come what may,” Suresh said.

He revealed that the idea of Tokri came to him as “a result of a guilt trip” when he was driving to his former place of employment Famous House of Animation (he worked there for 11 years) from his home in Bandra.

“At Mahim junction, you invariably have these beggars, [with] kids and all. There [was this] little girl that came with baskets and I kind of shooed her away, like everybody would do. So from Mahim till Mahalaxmi, the drive was a little difficult for me. I thought what if it was a particular circumstance that led her to sell the baskets,” he explained. "We are so quick to think that she’s a beggar, part of a gang. How insensitive of me to behave like that! Why did I have to be so brash? Just shooing her away. Maybe she tried again and again to sell it. That is one part of the inspiration."

The second part was the use of stop-motion animation for the short. He had previously worked on the popular clay animation advertisements for Amaron battery and the character of Chintamani for ICICI bank. When Suresh wanted to begin Tokri, he thought to make it in this style. “I thought we had to revive [clay animation],” he said.

Animation, especially stop-motion, is a long and painstaking process, but they never anticipated that Tokri would take eight years to finish. The project began with an enthusiastic young group who hadn’t worked on a stop-motion animation film.

“I thought, let me deploy this and start them on a clay animation project. When I narrated the story of this girl, there was a lot of resonance. They were all feeling for the characters, for the father and the kid. That was something which I thought was a good starting point. Emotionally, they were in. We knew that it is a massive task but we thought we’ll finish it by 2010.”

Nilima remembered that many of the artists rotated out as the years passed. The final credit list on the short reflects that. “Of course, there was a lot of support from our 2D team also in terms of doing the animatics, pre-production, character sketches, all of that,” she recounted.

The Tokri team did a pre-visualization of the story in 3D and had multiple storyboards. “Instantly, the moment everyone signed, I did a first draft of the storyboard. Then it was improvised upon. Our entire team acted as the characters and we shot it,” Suresh recounted.

But the studio worked on other projects (ads, music videos, etc) during those years. They weren’t able to devote their time to it full-time as they would have liked.

“The team was called into other projects. It’s a feeling that their salaries are somewhere taken care by these projects. There was a lot of time that was wasted as they got in and out of the project. It was in that sort of stretched timeline. Somewhere in our mind, we were thinking that we didn’t want anything compromised. This was a wrong notion,” Suresh admitted.

The main scenes of the short film, the exterior scenes leading up to the climax (around nine minutes), remained. These were most crucial as all of the interior shots had been completed at Studio Eeksaurus itself. But a space at Famous Studios had to be rented out for a few months for the exteriors. The right crew had to come forward to finish it off. 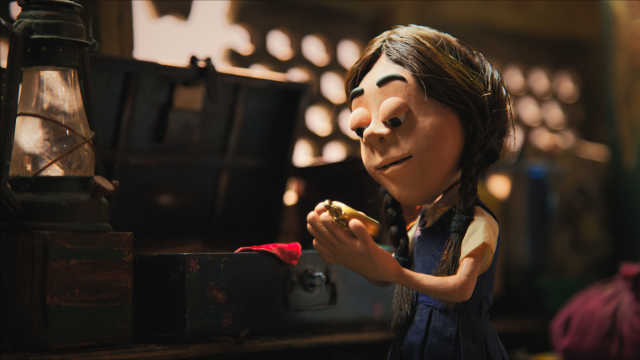 A lot of work was put in to make sure that both sections didn’t look apart from one another. They hired new art directors who had to replicate the look of the interiors to the outdoor sequence. The model characters (over a 100) used for animation were also reduced to half their size so they could be incorporated with the new sets representing the streets of Mumbai.

The biggest problem was that they had no animator. No Indian animator could step in. Help arrived via an agency representing Polish talent in India. They recommended Adam Wyrwas, the lead animator on Peter & The Wolf (2006) which won the Annecy Cristal award in 2007, as well as the Academy Award for Best Animated Short Film in 2008.

Nilima recalled, “Suresh and Adam had a Skype call, [and] even though Adam didn’t speak great English, but he understood [us] and was experienced. That, to us, was the right fit. There was no looking back from there.”

After Wyrwas’s arrival in India, the whole tone of the project changed. Far from being abandoned, Tokri got an adrenaline shot in the arm. Suresh and Nilima stated that Wyrwas was the fastest stop-motion animator in the world. On Tokri, he would complete shots anywhere from six to 30 seconds a day, even though he had to adapt to the Indian infrastructure that was available. Those hard-to-complete nine minutes were finally finished in three months.

The whole experience was a teachable moment for the team at Studio Eeksaurus. Wyrwas’s attitude towards his work inspired them all.

“Around him, the energy used to be so great. In the West, people are much more disciplined when it comes to work,” Nilima stated. What we lacked with our team here, over the six years that we had been indulging with them, inspiring them, keeping this department going, funding and fuelling from all the hard work we are doing on the advertising side, we would get a list of more problems. For us, to produce those nine minutes with so much difficulty and problems, [the five minutes] were so much smoother and faster.”

They re-examined the whole way they approached and prioritized their projects and vowed to be more systematic with their daily schedules.

Later, we also discussed the overlooked signature film of the festival. Suresh and Nilima, who have created signature films for other prestigious international film festivals, wanted to make sure that the city’s well-known movie festival would also be represented.

While many weren’t aware of who were the faces behind the rousing promo during the festival, it recently won the FICCI-BAF award 2018 for their efforts. The always active studio has plans to work on another short film. They also carry out a mentorship programme for young Indian animators, helping them to make their first short film and showcase it internationally.

Like any endeavour, there have been hits and misses. What’s Your Brown Number, directed by Vinnie Ann Bose, has been one such success story with numerous global awards to its name. By encouraging these young filmmakers, Suresh feels they are trying to solve the problem of creation in Indian animation in a scalable way.

“Unless and until content creation is pushed, animation is not going to survive. There’s all these really connected people. They are not trying to lobby for good distribution network. We can make films, even if we make the best stuff, you’re not able to show it to the people,” he stated.

Furthermore, he felt Indian children, used to standards of international animation, may not find Indian animation as appealing. It is up to the industry to upgrade and up their game. The success of films like Hanuman (2005) was promising, but so much more needs to be done to emulate it again.

Studio Eeksaurus have already won the Annecy Cristal for a Commissioned Film in 2015 for their short film, Rotary ‘Fateline’. Hopefully, a feature film will be on the cards somewhere in the future.