Actors in Hindi cinema think a lot about their characters: Gayathiri Iyer on working in Raid


The actress, who made her Hindi film debut with Raid, speaks about working with Ajay Devgn, the realism in Raj Kumar Gupta's film, and the difference between the acting process in Mumbai and in the South.

One look at Gayathiri Iyer's filmography and it is easy to be misled that she loves the horror genre. But with Raid (2018), she has arrived in Hindi cinema through a realistic film about a tough and extended income-tax raid.

Quiz her about the horror genre and she is almost embarrassed. "It just happened," she says. "I love to watch horror films but not act in them. There is very limited space for acting [in horror films]."

With Raid, Iyer had no such problems. Raj Kumar Gupta's film has already earned good reviews for its realism, grittiness, and stellar performances. As one of the many income-tax officers in the film, Iyer joined a stellar cast of Ajay Devgn, Saurabh Shukla, Amit Sial and others to be a part of the film.

In an interview with Cinestaan.com, Gayathiri Iyer spoke about the experience of working in her first Hindi film, and the differences in the process in the North and the South. Excerpts:

How did you come across the part in Raid? How was it offered to you?

I was in Bombay and I have worked in ads a bit. The casting company, Casting Bay, remembered me and called me as they were looking for someone with a very Indian face. The auditions took place, three in the span of 20 days. After the auditions, we had a couple of tests, which I cleared and got the role. 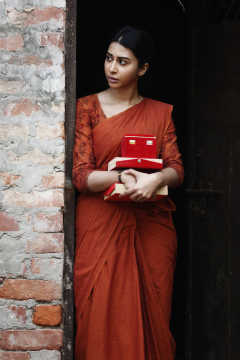 Was there any prep involved?

The direction and writing teams wanted me to be as I am. I asked if they wanted me to pick up the UP [Uttar Pradesh] lingo and accent, but they wanted to keep it natural. I think I was in my comfort space because they didn't want me to put on any extra stuff.

Not all actors [in the film] put on an accent. There was one actor who was naturally from Benares, and so it was just his style. Most of the others were from Mumbai, and hence the director wanted us to speak in normal Hindi.

Raj Kumar Gupta is known for creating some powerful female characters. Was that an advantage?

The film was actually written by Ritesh Shah, who has given it the flavour it has. It is his work that created Mukta Yadav, the character I play. She is a very brave female. Though she is bold, she is also a bit afraid of raiding the most powerful man in UP, played by Saurabh Shukla. But she is still a righteous person and wants to do her duty.

There are scenes in the climax where they [the I-T officers] are surrounded by a mob and there are guns going off. Womenfolk are usually supposed to cry in these scenes, but they were very clear that this character will not cry.

Though she is afraid, she can't cry on duty. Though she has her fears, it is not like she is going to jump into a fight. But she is not vulnerable. It feels good that they have envisioned her as this person and not as someone who breaks under pressure.

How was it working in an ensemble cast?

There were a lot of members, 10-12 members of the main team, who join Ajay Devgn's character. It was really nice for me to work with them because I have done movies in the South where the process was different. Here, I could see the actors think a lot about their characters. I could see they were analysing how the character would speak, sit, and all that.

Ajay sir was quite down to earth, joking with us and interacting with us all the time. By the end of the shoot, we were all very comfortable with him.

You talked about actors here being different from those in the South. In what way?

I think the competition level in the industry is huge, and actors are constantly pushing each other. This was very new to me, as I have not seen this in the South. By hook or by crook, they [the artistes in Hindi cinema] want to portray their characters better.

Ajay Devgn is also a prankster, isn't he?

We are a corrupt society, so we show corruption in films: Ajay Devgn on Raid

You have done a fair share of films in the South Indian languages, Telugu, Kannada, before breaking into the Hindi industry.

Well, all the films I did in the South were via Mumbai. It was because I was working for ads, so it was through Mumbai connections.

There is a connection to horror films though...

It just happened. I love to watch horror films but not act in them. There is very limited space for acting [in horror films]. It is just screaming and wide eyes. The audience doesn't expect you to act very well either. So as an actor it is not a very satisfying job. Somehow, it just happened that at that time it was the trend of horror movies in the South.

Actresses are taking a stance, causing a change: Ileana D'Cruz on Baadshaho, Raid, and the film industry

It was either comedy horror, or romance horror, there were several other genres coming in. Those movies were doing really well also. So, it just happened.

Well, I am looking for more films. I would love to do more of Hindi cinema, but the opportunities are coming through from the South Indian industry as well. I am glad that I was able to make my debut in Hindi cinema with a film like Raid.