Priyanka Chopra lands in her city Mumbai only to fall sick


A close aide also took ill along with the Quantico actress.

She had shot to international prominence with the single 'In My City'. Priyanka Chopra was back in her city, Mumbai, in the wee hours of Monday, only to fall sick.

Chopra returned from New York, where temperatures have been in the below-zero range, while the summer has begun in Mumbai. 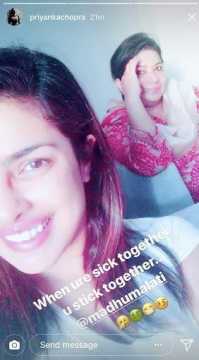 The actress disclosed her illness on her Instagram Story where she posted, 'When you are sick together, you stick together... Madhumalati.” The Quantico actress was referring to someone close.

Chopra arrived in Mumbai after wrapping up the third season of Quantico. She is said to have signed on for a new Hindi film.

Earlier it was rumoured that the actress would be taking up a bio-pic on the late astronaut Kalpana Chawla, but today a daily reported that Chopra may have given the nod to the Salman Khan-starrer Bharat.

For now though, fans will hope that the actress gets over her illness soon.