The comedian posted a series of tweets in the wee hours of Sunday accusing his former colleague of not responding to his calls.

Kapil Sharma has returned to television with a new show and reignited his feud with Sunil Grover in the process.

Late on Saturday, Sharma took to Twitter to slam Grover for allegedly not responding to calls when he approached the latter to be part of his new show, Family Time With Kapil.

On 16 March, a fan had sent a tweet to Grover requesting him to reunite with Sharma on his new show, but Grover responded that he was never offered the show.

Sharma was perhaps offended by Grover’s tweet and responded with a series of tweets in the wee hours of 18 March, slamming Grover for not taking his calls.

"Paaji, I called you more than 100 times and came to your house to meet you twice. Every time you were out for some show. Please don’t spread rumours,” he wrote to Grover.

Paji I called u more then 100 times n came to ur house to meet u twice .. every time u were out for some show n all .. pls don’t spread rumors that I didn’t call u.

Soon, fans of the two comedians got involved in the thread. In one of his replies, Sharma alleged that Grover was trying to milk his name.

Yes I love him.. but sometimes it hurts u a lot ..when u do a lot of hard work for somebody n he just want fame on ur name .. abhi qyun bola ? Ek saal ke baad ?

The website spotboye.com had taken a grab of this deleted tweet wherein Sharma alleged that Grover had asked for more money. 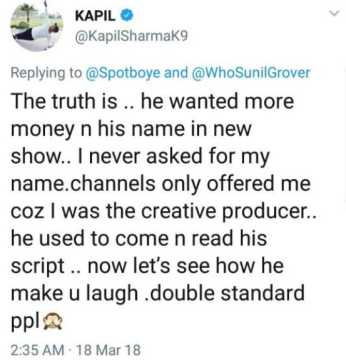 Grover, meanwhile, reiterated that he wasn’t offered the new show and said Sharma was just ranting about the previous show, The Kapil Sharma Show. Grover had quit that show after a bust-up with Sharma on a flight.

The former partner went on to wish Sharma well for the new show.