On the National award-winning composer’s 50th death anniversary, a look at his working relationship with the maestro Naushad.

Ghulam Mohammad, who won the National award for his music on Sohrab Modi’s Mirza Ghalib (1954), died in 1968, before he could complete scoring the music for Kamal Amrohi’s Pakeezah (1972).

After his death, Naushad stepped in to complete a few songs and provide the background score.

It was a strange turn of events. Ghulam Mohammad had been Naushad’s chief assistant for 10 years before branching out to become an independent composer.

Ghulam Mohammad, who was 12 years older than Naushad, was a dholak (a percussion instrument) player whose performance is evident in many hit songs from the soundtrack of the blockbuster Rattan (1944). 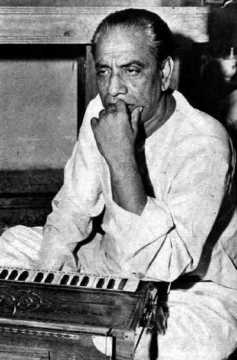 Ghulam Mohammad was the son of Nabi Baksh, a talented tabla player, and learnt the tabla and the dholak from him. The young man joined the Jodhpur Bikaner Theatre Company in his home state of Rajasthan and, later, also did a stint at the New Albert Theatre Company in Lahore. In 1924, he arrived in Bombay to try his luck in the film industry.

Music composer Anil Biswas noticed the young man's talent at percussion instruments and began using him as a musician for his recordings. But it was a newspaper advertisement from New India Pictures for musical auditions that changed the course of his career.

The musicians were to be tested by Ustad Zande Khan, who was composing the music for a film titled Sunehri Makdi, directed by Rafiq Rizvi.

As it happened, the film was never completed, but it was at this audition that Ghulam Mohammad met Naushad and both were selected for the project. Naushad, who played the harmonium, received a monthly salary of Rs40 while Ghulam Mohammad got Rs60 and played the tabla.

But on their first project together, Naushad got promoted to Zande Khan’s assistant. Later, when Naushad became an independent composer, he brought on Ghulam Mohammad as his assistant.

Ghulam Mohammad worked with Naushad until 1952 when he, too, branched out as an independent music composer. Incidentally, his younger brother, Ibrahim Mohammad, took up his position when he left. However, Ibrahim made a slight modification to his name and became Mohammad Ibrahim, in an attempt to stand out from his brother.

After leaving Naushad’s orchestra, Ghulam Mohammad composed the music for films like Sheesha (1952), Rail Ka Dibba (1953) and Laila Majnu (1953). Despite winning the National award for Mirza Ghalib (1954), however, he was not as well known as his mentor.

Surprisingly, Ghulam Mohammad was not the first choice for Kamal Amrohi’s Pakeezah (1972). Both C Ramchandra and Naushad were considered but eventually it was Ghulam Mohammad who was selected.

After his death on 17 March 1968, however, it was Naushad who stepped in to complete the film which took 16 years to finish and underwent many changes.

When Pakeezah was finally released in 1972, there were insinuations that the best songs from the film, ‘Inhi Logon Ne’, ‘Mausam Hai Aashiqaana’ and ‘Chalte Chalte’ were all Naushad’s doing. Naushad wanted to score the background music of the film as a personal tribute to Ghulam Mohammad, but in doing so, he stole the limelight from the composer's last triumph.

Biographer Raju Bharatan wrote in Naushadnama: The Life and Music of Naushad that Ghulam Mohammad, “even after he left the shade of the Naushad banyan tree, never grew out of its shadow. As he left our composing ace for good, the Naushad luck, too, left Ghulam Mohammad.”