Author Diptakirti Chaudhuri: Bioscope is a sit-down meal, curated by the chef


The writer of Bioscope: A Frivolous History of Bollywood in Ten Chapters talked to us about his latest book on the history of Indian cinema.

The title of Diptakirti Chaudhuri’s new book, Bioscope: A Frivolous History of Bollywood in Ten Chapters, is a mouthful. But if you’ve read his other books, you’ll walk away from the experience looking at Hindi cinema with extra information.

Did you know that in Benaam (1974), Amitabh Bachchan plays a character, Amit Srivastava, which is his real name? Bachchan's father Harivanshrai took on the title of Bachchan, but Srivastava is actually their last name. Or that Anupam Kher’s character Disco Killer was edited out of Jaane Bhi Do Yaaro (1983)?

That first bit of trivia can be found in Chaudhuri’s first book on Hindi cinema, Kitnay Aadmi Thay, while the second is in Bollybook: The Big Book of Hindi Movie Trivia. With his newest book out now, Cinestaan.com spoke with the author over email to find out more out about its contents, the curious title, and why he really hates choosing amongst his favourite films. 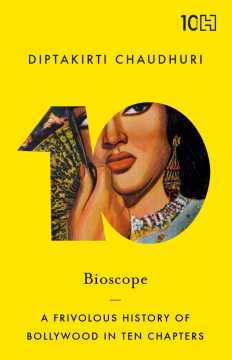 This will be your fifth book, and the third one on trivia, how does it differ from the other two books, Kitnay Aadmi Thay and Bollybook?

I’d like to think Bioscope is a ‘history’ — something that gives a sense of how Hindi cinema has changed in a variety of ways. How the music has changed, how actors and actresses have evolved, how villains are changing, even the language and topics of songs, how various moments of Indian history have been captured on cinema… all this is covered in the book, which follows a kind of sequence that will be evident when one reads the book.

Bollybook and Kitnay Aadmi Thay were compilations of many of the crazy and not-so-crazy things we see in our cinema. They were, intentionally, a jumble of characters, props, locations, songs, dialogues and several other things Bollywood is famous for.  Bioscope is sit-down meal, curated by the chef. Bollybook is an eat-all-you-can buffet!

Can you explain the title of the new book, Bioscope: A Frivolous History of Bollywood in Ten Chapters. How did you arrive upon it?

Bioscope has been used as the early name for cinema, to describe a travelling movie theatre, or as a generic name for a film camera (and sometimes a projector). I interpreted it loosely as a device to peek into the past. For kids growing up in 1980s India, it is also the name of a squat, cylindrical machine (on a stand) with small windows in which you placed your eyes to see a passing montage of photographs (usually bunched together in a theme). I interpreted this as a collection of snippets that showed a progression.

Somewhere this ‘Past Progression’ got collectively interpreted as ‘History’. To warn people that this is not a scholarly work that would aid their PhD thesis, I added a ‘Frivolous’ before the history.

What kind of research did you embark on for this book and when did you start? Do you have your own notes and library for this kind of writing?

My ‘research’ around Hindi cinema started when I was a toddler, from the time I started watching movies. I have lots of notes — in paper and digital form — that I keep taking when I watch movies or read books on cinema or discuss movies with friends. I have a fairly decent library of books on Hindi cinema, some of which are named in the bibliography of this book. The writing of this book took about six months, from July to December 2017.

Were there any things that you had to leave out of the book? Anything you wished you could have added?

To keep the flow of the book smooth and focused, I had to leave a ton of stuff out but hopefully, the stuff that I left in would be enjoyable as well. One example, in the chapter on the villains of Hindi cinema, I have looked at how the villainous characters have evolved but I couldn’t fit in all the legendary actors who have played the villains — Prem Chopra, Gulshan Grover, Ranjeet, Shakti Kapoor are some of my favourite villains who got missed and they deserve a much detailed writing. Maybe in a future book…

What is the strangest bit of trivia that you came across in your research?

Not really strange, but unexpected… While we are talking about heroines not being treated at par with heroes in the present day, I realised (or rather, was reminded) that in the earliest days of Hindi cinema, we had a star like Devika Rani who was not only paid more than her co-stars (Ashok Kumar, for example) but was older than some of them as well. And she ran Bombay Talkies as a producer, after her husband’s death. Devika Rani and another major star of the early days — Fearless Nadia — feature in the book.

Were there any challenges on this book, since you had already written two previously on trivia and lists as well?

Not really. The challenge, if at all, was to come up with a structure and list of topics that would be visibly different from my previous books. As far as the content is concerned, Bollywood is an ocean and I was confident of coming up with new material as long as the structure was locked.

Your Twitter bio says 'Salesman by day, writer by night'. How do you fit in the time for films?

I think we all fit in the things we love. I have friends with extremely hectic day-jobs who still find time to run marathons and form music bands or do podcasts. A ‘night job’ is something we all look forward to. After a tiring day at work, I am relieved to be doing some movie-watching or writing about them.

You’ve also written a book on the careers of screenwriters Salim Khan and Javed Akhtar. Do you plan or hope to write about any other industry personalities?

Hope, yes. Plan, not yet. There are so many interesting people in the industry whose stories are crying out to be told. Some excellent books have come out in the recent past but there are so many more to go!

How Salim Khan fared after splitting with Javed Akhtar

From where did your love for Indian cinema, especially Hindi cinema, emerge? Have you always been a film buff?

I have always been a film buff, which I got by inheritance since my mother is also a big Hindi movie fan. Often parents don’t let children watch movies. In my case, my mother took me to watch them and I grew up loving the movies of 1970s and 1980s with her. In fact, we still discuss a lot of movies with her.

If you were stranded on an island and could only take five films with you, which ones would you choose?

This is a terrible question. I might as well kill myself before I get to choose only five.
Okay… let me make this a bit easier by choosing one favourite film from the last five years. Not really ‘desert island films’ but I love these films a lot.
2017 – Death In the Gunj
2016 – Kapoor & Sons
2015 – Dum Laga Ke Haisha
2014 – Filmistaan
2013 – Kai Po Che

The middle class are not interested in the real national issues: Javed Akhtar on the growing commercialism in films