On the 25th anniversary of the director's death (he passed away on 9 June 1993), we revisit Bose’s first blockbuster hit, Chalti Ka Naam Gaadi, featuring the three Ganguly brothers, which was released 60 years ago.

Hindi film fans, young and old, can easily recall the three Ganguly brothers together in one film driving around the wide roads of 1950s Bombay in their troublesome but beloved 1928 Chevrolet. 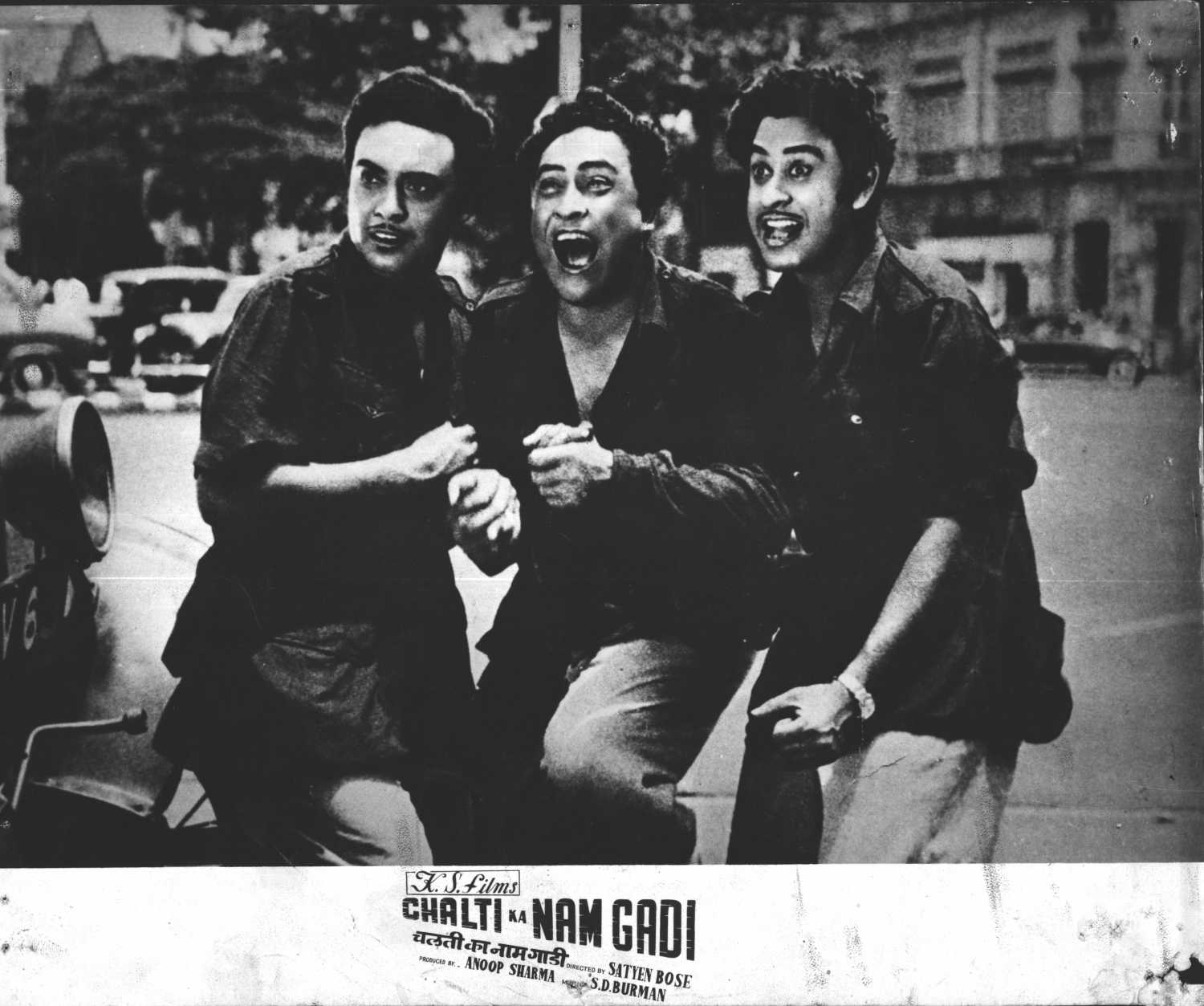 Brijmohan dislikes the opposite sex vehemently and encourages Jaggu and Manu to have no contact with women. Largely, they compile, until one stormy night, Renu (Madhubala), knocks on the doors of their garage.

As Manu fixes Renu’s car, he sings one of the most iconic songs of the 1950s, ‘Ek Ladki Bheegi Bhaagi Si’, and finds himself seeking out the company of the funny and charming Renu. Daughter of a rich businessman, Renu, too, finds herself drawn to the eccentric Manu. He pursues her relentlessly, not because he secretly likes her, but because he needs to get his payment – paanch rupaiya baara aana (five rupees and 12 annas).

The duo delightfully meet again and the audience is treated to two more gems composed by the great SD Burman: 'Main Sitaron Ka Tarana' and 'Haal Kaisa Hai Janaab Ka'. Just like Renu, we are transfixed.

The comedy elements of Chalti Ka Naam Gaadi are spot-on – from the bumbling younger brothers to the courtship of Manu and Renu and Jaggu and Sheela (Sahira). However, woven into the story is the side element of con man Raja Hardayal Singh (KN Singh), who saunters into their lives with the intention of seizing Renu’s family fortune. He and his right-hand man Prakash (Sajjan) try their best to separate Manu and Renu, but it is, after all, a family film.

The Deccan Chronicle newspaper in a 2012 article named Bose as one of the “unsung auteurs of Bollywood” and wrote that the filmmaker consistently “constructed strong narratives which followed the classic tradition of an opening reel introducing all the principal characters, a middle with a blizzard of contentious situations, and a finale which sprayed happiness and sunshine”.

Further, he deftly handled the talents of his artistes – from Ashok Kumar as the stern older brother to Mohan Choti as the garage assistant. But the film’s biggest draw are Kishore Kumar and Madhubala.

The luminous actress with the infectious laugh was completely at ease in the comedy, showing good comic timing and a natural chemistry with Kishore Kumar. In a scene with KN Singh and SN Banerjee, who played her father, Madhubala shows off duelling emotions – the unease at dealing with Singh’s persistant Raja saheb and trying to be well behaved in front of guests.

Kishore Kumar was actually the producer on the film and had backed the venture hoping to write off the madcap project to the income-tax authorities. He never expected the film to be one of the year’s biggest hits. It all played out like a scene from Mel Brooks’s The Producers (1967). The film was credited to his secretary Anoop Sharma and the income-tax case against him was never resolved.

Thankfully, the film was also a great musical success with composer SD Burman and lyricist Majrooh Sultanpuri at the helm. Burman’s young assistants, Jaidev and RD Burman, might have also had a good hand in its success.

Watching the film again 60 years after its theatrical release, none of the songs feel dated, included the mujra number, ‘Hum Tumhare Hain’, featuring Helen and Cuckoo. In it, the younger dancer almost outshines her mentor Cuckoo on the dance floor with her expressive eyes and the hastaks (fast hand movements) of Kathak.

It is also refreshing to see that the female characters of Chalti Ka Naam Gaadi are no damsels in distress. They take matters into their own hands. Ashok Kumar’s frequent co-star Veena had a small but memorable role in the film as Brijmohan’s former flame, Kamini.

The animated title credits are a delight and Chalti Ka Naam Gaadi is one of the rare films to also introduce ‘Champion’, the 1928 Chevrolet, as a debutante in the opening credits.

In 2014, there was some talk that filmmaker Rohit Shetty and actor Shah Rukh Khan were thinking of remaking this classic after the success of their last collaboration, Chennai Express (2013). Thankfully, better sense prevailed and they did not touch the 1958 comedy, making Dilwale (2015) instead. Trying to recreate the magic and madness that made Chalti Ka Naam Gaadi so special would be the height of folly.