While the makers did not have a problem with the cuts, director Shashanka Ghosh was surprised with the recommendation when the producers had already sought an 'A' certificate.

Veere Di Wedding has had a good start at the box office bagging close to Rs50 crore nett in its first six days.

Veere Di Wedding was cleared by the Central Board of Film Certification (CBFC) with an Adults Only certificate. However, that does not mean the makers had a smooth run with the body that is often called the censor board.

According to a report in the tabloid Mid-Day (7 June 2018), the CBFC had allegedly recommended to the producers that they replace some cuss words with a list provided. The tabloid published a copy of the document. 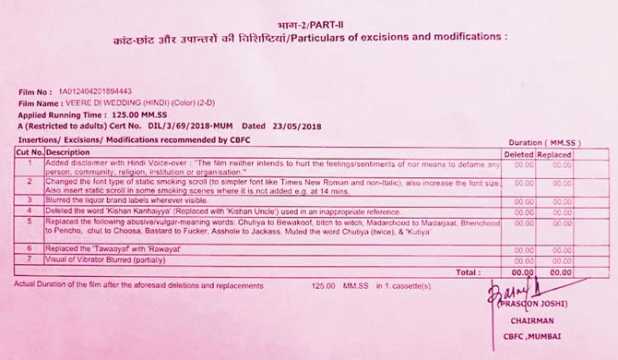 In addition, the CBFC wanted the makers to avoid the use of the word 'Kishan Kanhaiya', which it deemed an inappropriate reference. On the board's suggestion, 'Kishan Kanhaiya' was replaced by 'Kishan uncle' in the film.

Several of the changes suggested by the board were apparently incorporated in the film.

Veere Di Wedding director Shashanka Ghosh also confirmed that the CBFC had made these recommendations.

“Yes, they [the recommendations] were made by the CBFC," he said. "We had asked for an Adults certificate anyway, So we were never doing a ‘U’ film. Our film is an adult film, but we replaced the words.”

The director also expressed surprise that the CBFC document had made its way to the public domain.

Asked whether producers had any problem with these recommendations from the board, Ghosh said, “There were some arguments. We felt that if we are asking for an ‘A’ certificate, why do we subject ourselves to that [replacement of cuss words].”

Over the years, the CBFC has courted controversy on account of its conservative norms. Former CBFC chief Pahlaj Nihalani’s tenure was particularly controversial with quite a few filmmakers struggling to get their films released unmutilated.

Nihalani was sacked last year by then Union information and broadcasting minister Smriti Irani and replaced with writer-lyricst Prasoon Joshi.

It has long been rumoured that the CBFC has a list of do’s and don’ts for filmmakers. Nihalani had told Cinestaan.com earlier that this list existed much before he took over as CBFC chairperson. Often, committee members viewing a film simply forward that list to the filmmaker.

But it is hard to recollect the last time the CBFC offered options to producers to replace certain words with. Cinestaan.com contacted a former CBFC chairperson, who, though reluctant to talk, hinted that there was nothing in the guidelines to allow the board to suggest words of its choice.

“Unless it is an offensive film (pauses)... but basically we supported freedom of speech. However, it depends upon the current board. I think it is up to the people. If you don’t like something, then you don’t go and see it,” said the ex-chief.

“There are boards that have been very, very conservative, and some which have believed in a ‘live and let live’ policy, which is according to the rule of law. It is not for a board to tell people how to produce their film,” the former chief added.

Asked if the CBFC could ask producers to replace some words with a list of their choice, the former chief said, “No, they can’t. But they still do. It is not the CBFC but a viewing team made up of general people that watches films. These people sometimes make the recommendations. So, it depends upon them, and the respective producer or director. You will have to check with the CBFC what the rules are.”

Efforts to contact CBFC chairman Prasoon Joshi did not elicit any response.