The threads of cinema and politics run deep and are intertwined in Tamil Nadu. As DMK president M Karunanidhi turns 94 today (he was born on 3 June 1924), we look at his words that shaped his path in Tamil politics.

With the death of J Jayalalithaa on 5 December 2016, Muthuvel Karunanidhi remains the last symbol of a fading Dravidian movement in Tamil politics.

Beginning his political career as a 14-year-old activist in the anti-Hindi agitation of the late 1930s, Karunanidhi quickly became the voice of the surging Dravidian movement led by 'Periyar' EV Ramasami, CN Annadurai 'Anna', and others.

It is no surprise then that the nascent Tamil film industry sought him out to write a new narrative.

In many ways, Tamil cinema has shaped the politics of the southern state. Karunanidhi’s great friend and, later, bitter rival MG Ramachandran, J Jayalalithaa, DMDK founder Vijayakanth, and now Kamal Haasan and Rajinikanth have all stepped out of the big screen into the political arena.

As the five-time Tamil Nadu chief minister turns 94, we take a look at his work in early Tamil cinema upon which was built his early rise in Tamil politics.

After working for a while at Salem’s Mercury Studios, Karunanidhi moved to a bigger stage, Jupiter Studios in Chennai. In 1946, studio head Jupiter Somu set his writers the task of creating an Arabian Nights meets Aesop’s Fables adventure for the screen. The film would be the debut of an athletic hero who would shine because of his ability to do stunts. His name was Marudur Gopalan Ramachandran. Over the next decade, he would become one of the closest associates of M Karunanidhi, on screen and off.

His second film would earn Karunanidhi a three-figure salary at the studio. Based on the story of Abhimanyu in the Mahabharata, the film featured a flourish of monologues that were enriched with the pure Tamil verbosity of Karunanidhi. The writer, perhaps, found the perfect vehicle in MGR (who played Arjuna), making him address the slain Abhimanyu as ‘Anbu Tamizh Magan’ (Beloved Son of Tamil). The move shifted a very North-based epic into Dravidian lore, and also marked the first step of MGR and Karunanidhi’s unification of cinema and Dravidian politics.

While MGR remained Karunanidhi's closest political muse, it was in Sivaji Ganesan that Karunanidhi found his political vehicle. The debut of the man who would be called Tamil cinema’s finest actor was scripted by the now prolific Tamil writer. Parasakthi tackled the issues of displaced Tamils, corruption, rationality and social evils that were at the heart of the Dravidian movement. The climactic sequence of Sivaji's monologue in court remains one of the iconic moments of Tamil cinema.

Despite his Dravidian stance, Karunanidhi started out as an idealist protesting against the growing influence of capitalism in politics. Panam was a particularly stinging satire against the system. Revolving around a rich man whose greed destroys his son's life, and everyone else around him, it was furnished with snappy dialogues and wit that poked holes in the prevailing Tamil politics of the time.

The film is also remembered for the songs by lyricist Kannadasan (another iconic name in Tamil cinema) that added firepower to Karunanidhi’s prose. This particular song by NS Krishnan is a satire sung by a prisoner on where to look for money. The obvious idea he has is to look for it in temples, race clubs or political party offices.

Incidentally, another song in the film is ‘Theena Moona Kaana’, whose initials in Tamil are ‘DMK’. It was a sly way of confounding the censors while getting party propaganda through. Witty and effective.

As the Dravidian movement grew, it attracted the ire of the Indian National Congress led by then prime minister Jawaharlal Nehru. Nehru famously derided it as ‘nonsense’. The writer in Karunanidhi could not miss this opportunity and wrote it as a recurring dialogue in this film about a womanizer (another jibe at Nehru) who just cannot mend his ways.

The film included a song on adulteration ('Kalappadam Kalappadam') foisted by political parties.

As a satire, and a film, Thirumbi Paar earned critical and popular acclaim. Sivaji Ganesan himself called his work in the film "one of his best", which is nothing to be scoffed at. Critic S Viswanathan in Industrial Economist called the film "one of the powerful movies scripted by M Karunanidhi".

Having broken away from the Dravidar Kazhagam movement of Periyar under the leadership of CN Annadurai to form the Dravida Munnetra Kazhagam political party in 1949, Karunanidhi set out on a parallel journey of cinema and politics. In another Sivaji-starrer Manohara, this experience of splitting from his mentor found shape. The story of a righteous rebellious prince, fighting for the cause of his pious mother (Tamil) against a misled, naive father, is no subtle metaphor. Embedded with powerful lines and monologues, it went on to become one of the most popular films of its time. 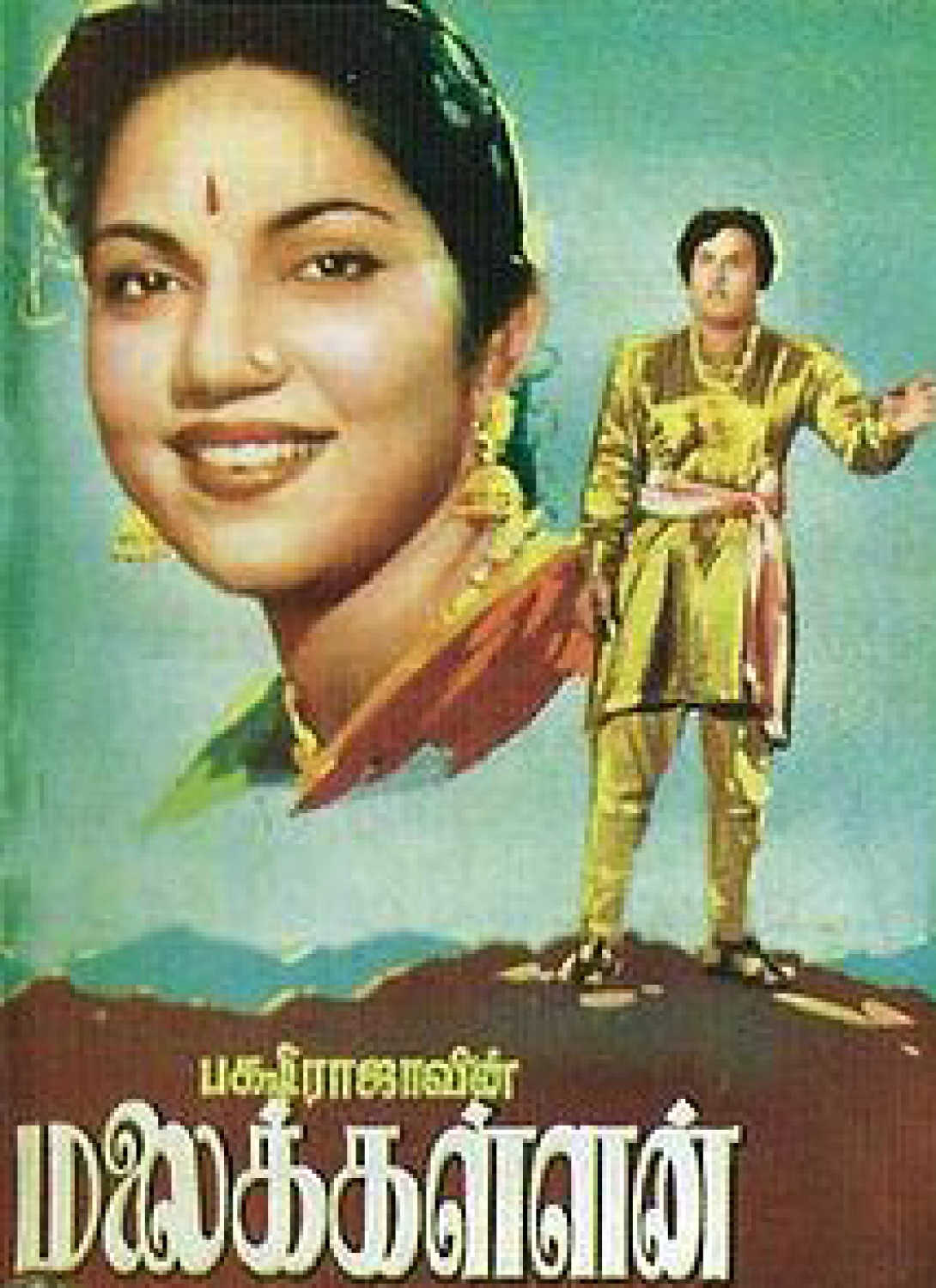 A mix of The Mask Of Zorro and Robin Hood, Malaikallan had MG Ramachandran playing the rich man who moonlights as a dacoit and helps the poor. The story had similar parallels and sought to table the idea of MGR as the noble hero in real life and Karunanidhi as the man behind it all. The film and its multi-lingual remakes proved to be successes.

In 1957, Karunanidhi won his first assembly seat and entered the Tamil Nadu legislature. It began a career that continues six decades on.

Malaikallan was remade in Hindi as Azaad (1955), starring Dilip Kumar, Meena Kumari and Pran, and became a big hit.

Correction: The copy was re-edited on 5 June 2018 to reflect the correct status of the commercial success of Malaikkalan as pointed out by our reader Shailesh Basu.