The courtroom drama will be competing with Karwaan and Fanney Khan at the box office.

It was late last year that Rishi Kapoor’s look from Anubhav Sinha's Mulk was revealed on social media. The makers have now officially released two posters from the film. One is the look of Rishi Kapoor while the other is that of Taapsee Pannu.

As was widely rumoured, the story revolves around a Muslim family facing serious charges. One of the two posters revealed today shows us Murad Ali Mohamed, played by Rishi Kapoor, who is perhaps accused of terror charges.

The other is that of Aarti Mohamed, who is the defence lawyer and, probably, also the daughter of Rishi Kapoor's character.

Kapoor looks like a man who can evoke fear, but he also looks aggrieved. The fear stems in part from the stereotype of bearded Muslim men being perceived to be terrorists. 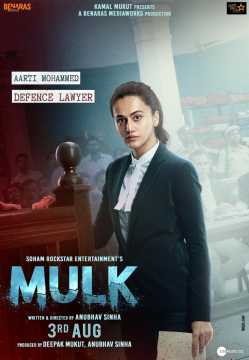 It's the name Aarti Mohamed that catches our eye, however. Is Murad Ali married to a Hindu woman or did the man choose to give his daughter a Hindu name? We will find out when the film is released. But the grim look in Pannu’s eyes tells of her ordeal. She has a tough task at hand to get justice for her father.

“Some films are not made just for screens... they need to travel beyond. This is one of them,” tweeted the actress.

The film is set to be released on 3 August when it will compete with Irrfan Khan’s Karwaan and Anil Kapoor’s Fanney Khan.

Rishi Kapoor has portrayed Muslim characters in the past, most famously in Manmohan Desai’s blockbuster Amar Akbar Anthony (1977). And when he made a comeback to the big screen after a long break with Karan Malhotra’s Agneepath (2012), it was again as a clean-shaven Muslim character, Rauf Lala, one of the two antagonists in the film.

It is perhaps for the first time that we get to see Pannu wearing a lawyer’s cape. Sinha had last directed Tum Bin 2 (2016).