The actress is in London to promote her upcoming ensemble film, Love Sonia, directed by Tabrez Noorani.

Love Sonia was the opening film at Bagri Foundation London Indian Film Festival and screened at the Empire Leicester Square. The film, based on real-life events, focuses on the story of two sisters against the backdrop of human trafficking on a global scale.

After a positive screening, Chadha received a nice surprise as she was awarded the Outstanding Achievement award for her work. In a statement, the actress exclaimed, “This was completely unexpected. I was overwhelmed with the response to the film and very happy that people knew, appreciated my work here in London. People who are big fans of the Fukrey franchise as well as Masaan (2015). It was a humbling experience.” 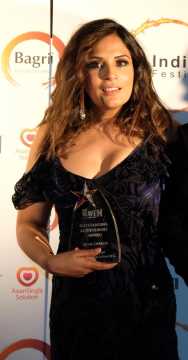 Earlier on the red carpet, the actress talked about the importance of independent films in India. “Independent films are key in telling a true story especially in India. The script is the king there. We don’t have unnecessary songs, action sequences; we’re not trying to titillate the audience even though the subject is sexual slavery. It tells the tale how it is,” she told a reporter.

The Bagri Foundation London Indian Film Festival is being held from 21 June to 1 July.