Actor David Abraham Cheulkar, best known simply by his first name, was a consummate character actor and supporting man from the 1930s until his death in the early 1980s.

Though originally headed for a career as a lawyer, David leaned towards the arts from an early age, performing in plays. A chance meeting with the head of Films Division altered his outlook and he made his debut with Mohan Bhavnani's Zambo The Ape Man (1937).

In the Prakash Arora film, produced by Raj Kapoor, he played a kindly bootlegger who takes a shine to two orphaned siblings, Bhola (Rattan Kumar) and Belu (Baby Naaz). He encourages them to earn their living and is their champion in every way. The actor won the Filmfare award for his role as John Chacha.

Boot Polish (1954) was also awarded Best Film by Filmfare and competed for the Palme d'Or at the Cannes International Film Festival. Baby Naaz won a special mention for her performance at the festival.

In the book, Directory of World Cinema, critic Omar Ahmed writes, "Boot Polish constructs a socialist agenda focusing on a sentimental representation of street children, slum life and child poverty. All of these apparent social ills tie in with an optimistic inclination fostered by Nehru's reformist vision for a new Indian society in which children are in control of their own destiny."

According to Kapoor's daughter Ritu Nanda, the original film was songless, it was her father's decision to introduce songs. "[He saw the film and wondered: how will it run? He then decided to make his own contribution to the movie and incorporated songs into the story, including such everlasting numbers as 'Nanhe munhe bachche teri mutthi main kya hai' and thus ensured that Prakash Arora's film became a success," she wrote in Raj Kapoor: The One and Only Showman.

RK Films made Boot Polish on a low budget; their previous film Aah (1953) was not as successful. Kapoor's favourite composers Shankar-Jaikishan and their lyricist collaborators Shailendra and Hasrat Jaipuri only had a week to come up with eight great songs for the soundtrack.

Amazingly, the foursome completed the task with flying colours. Out of these, 'Nanhe Munne Bachche' by Shailendra has become an enduring classic. A duet by Asha Bhosle (a big deal for the young singer at the time) and Mohammed Rafi, the song is a hopeful anthem for a newly independent nation under a new leadership. 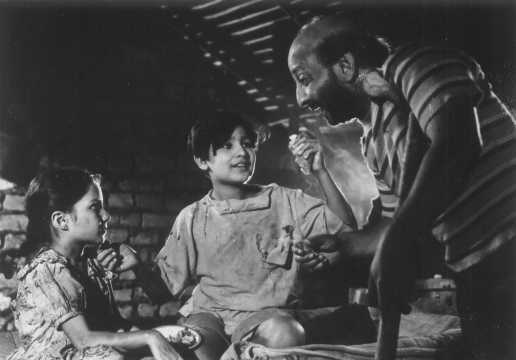 While John Chacha asks his young charges about their future, the young ones respond that their future is in their hands. Living on the streets, with little hope and money in their pockets, the children still dream big.

After Boot Polish, the image of the kindly uncle or paternal figure stuck to the actor. He was often seen as the wise old man, helping out the younger generation, or just as a friendly face of the family, lending support. Only in a rare film like Hrishikesh Mukherjee's Satyakam (1969) did David play against type as a cynic and a drunkard, Rustom.

His last film was with Mukherjee as well, the family film Khubsoorat (1980). He died on 2 January 1982 after suffering a stroke in late December 1981.