Sujoy Ghosh on Jhankaar Beats: If you don’t believe in yourself, nobody else will


As the musical completes 15 years today on 20 June, we spoke to writer-director Ghosh on the challenges of making his first film and how he has evolved since then.

Filmmaker Sujoy Ghosh’s directorial debut was the enjoyable musical, Jhankaar Beats (2003), the story of two friends who idolize film composer Rahul Dev (RD) Burman and want more than anything to win the Jhankaar Beats music competition. They rope in the son of their boss, Neel, and form a band as they make it their mission to claim the title, once and for all.

Jhankaar Beats (2003) stars Sanjay Suri and Rahul as Deep and Rishi. Look closer and you’ll realize those are Burman’s initials. There are many references and tributes to the maestro in the film — the friends are constantly dissecting the cult classic Sholay (1975), which had music by Burman, Deep’s newborn son is named Rahul and before the big competition, the friends stop to pay respects outside Pancham’s [Burman’s nickname] house.

We spoke to Ghosh in a telephonic conversation before he began work on his latest film. The writer-director reflected on his first film, how it changed his career and how he thinks he has evolved since then.

In 2003 before Jhankaar Beats released, the filmmaker had said in an interview with Rediff.com, “My life will begin after the release.” When asked how the film marked a different period in his life, Ghosh said the film changed many things for him.

“It changed my career, but more importantly, it changed a lot of views on life. As a person, you go through life and since the time you’re born, there’s always a demand in your life for your own self. I want this, I want that. You keep asking for a lot of things and sometimes you ask for things which are impossible. As a normal, middle-class person with no film background, suddenly when I wanted to make films, I wasn’t sure whether I’ll make it,” Ghosh said.

He still remembered the first day of shooting and had to figure some aspects of filmmaking on the job.

“I couldn’t figure why I had to call a cut, because everything is going so nicely. We can finish the film in one go. Then I realized you have to call ‘cut’ and then do something else. So I learnt on the job because I never directed a film before,” he said.

It took Ghosh three years for a producer to agree to make Jhankaar Beats. He felt the whole experience taught him perseverance.

“Even though it’s a seemingly impossible task, but it paid off. If you continue to believe in something, I think it pays off so that’s what I learnt. When the film [was] released, I realized that all the three years and the struggle and everything seems worth it, but it was a great lesson of life, more than anything else for me. I think you have to be persistent, you have to believe in yourself, more than anybody else. If you don’t believe in yourself, nobody else will.” 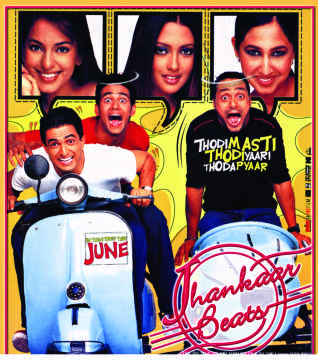 Besides Suri and Bose, the film also starred Juhi Chawla, Rinke Khanna, Riya Sen and introduced Shayan Munshi. Ghosh explained it was difficult for him to get artistes to agree to the film.

“My problem was, I was a nobody. It was hard to get people to agree, I still owe Sanjay [Suri] and Juhi [Chawla]. They so kindly agreed and then Saif [Ali Khan] was supposed to do Rahul’s role, but last minute, the dates didn’t work out. Rahul was so amazingly good and stepped in. I actually wanted Twinkle Khanna for [Rinke’s] role so I went and narrated to her, she said, why don’t you talk to my sister and she recommended Rinke. That’s how Rinke came in. Shayan was selected out of millions of newcomers that we tested, out of which I like Shayan the most. Then Riya came because of testing. So that’s how all that happened,” he narrated of the film’s ensemble cast.

The film also brought to the forefront composers Vishal-Shekhar who are so well-known today. Jhankaar Beats was one of their early compositions and Vishal Dadlani also wrote the lyrics for the film. Ghosh remembered how he connected with the duo to score music for the film.

“We had a common friend and, at that time, I had just made a script and I was still roaming around and he said there’s this one guy who wants to meet you. So this guy came and met me in The Times of India building, I had gone there for some work, he was also there and it was Vishal [Dadlani]. He said, ‘Look man, I heard you’re making a film, I would like to do the music’. I didn’t know anything and this guy seemed like a good guy,” he recalled.

Dadlani asked him to come to his studio in Worli, Mumbai to listen to a song they had created for the film.

“I went to his studio which was inside a graveyard, which was quite scary and apparently ghosts came out in the night. So I wasn’t too hot on it and then there was this another chap in the studio who looked like a child. I thought I was giving my music to these kids. That was Shekhar [Ravjiani]. Then they made me a song called ‘Tera Muskarana’. I quite liked that song. It was also in the film. So the next time I went to meet producers, not only I had a script, I also had a song, ‘Tera Muskarana’. They just struggled with me, I think. The whole struggle was between me, Vishal and Shekhar and eventually, [the film] got made.”

The songs, including the timeless ‘Tu Aashiqui Hai’ fit in nicely with the story of Jhankaar Beats. The composers and filmmaker had a collaborative relationship, even though they fought sometimes, which Ghosh called “a happy process”.

Ghosh stressed they never had any pressure as they had a tribute to RD Burman in mind, but were mindful of capturing the right feeling.

“It was just to get the vibe right. The typicalness of RD Burman’s song, we did pretty nicely and we had this gentleman called Abhijeet Malani who was also the arranger. He’s f*cking fantastic. He gave us that whole feel of RD Burman in most of the songs that we wanted,” he explained.

Even today, Ghosh would not change a thing about Jhankaar Beats. He stated, “This is a creative process. This is one of the things I’ve learnt about filmmaking. There is no right, there is no wrong.”

And even though he hasn’t seen the film in a while, he said he remembers his first film, frame by frame.

“If you ask me to narrate Jhankaar Beats, I can do it right now. I can narrate any of my films anytime. As a film, it’s perfectly fresh in my head,” Ghosh said.

He will embark on his sixth feature film now and Ghosh believes that he has evolved as a filmmaker.

“I’ve grown older, a lot more experienced, so [by] making movies, you are venting certain stories, which is also reflective of your understanding of life, your experience, your point of view and I hope I am mature as a human being so my films have also matured. Now I’ve realized you have to have a say in the film. You can’t have a film which is dilly-dallying, you should be a certain, as a filmmaker,” he concluded.