Jacqueline Fernandez steals the show with her scintillating dance moves in a brief appearance.

Race 3 has so far been a hit more with internet trolls than with fans of the franchise. A poor trailer was followed by two average tracks, one of them, 'Selfish', credited to male lead Salman Khan himself. The makers have now released the latest version of the franchise’s theme song, 'Allah Duhai'.

What is refreshing is that this time Salman Khan has left the specialist's job to the specialist. The lyrics have been penned by Shloke Lal and Shabbir Ahmed. The duo have written the introduction and the antara while, naturally, retaining the 'Allah Duhai' verse, originally written by Sameer. The lyrics are quite neat, a marked change from 'Heeriye' and 'Selfish'.

The music is by Tushar Joshi, better known as JAM8, and is refreshing. The intro reminds you of Limp Bizkit's 'Take A Look Around' which was used in the Mission Impossible theme song. While the American rock band used the guitar, JAM8 uses a subdued electronic beat for the Race 3 track, like a pulse that beats throughout the song. There are different tempos to the track, but there is never a drop in the rhythm. JAM8 deserves full credit for composing a gripping score.

The magnetic music makes it difficult for you to pay much attention to the singers. Sikander (Salman Khan) appears to be burdened with emotions and all set to unleash them. Amit Mishra’s tone reflects the anguish in Sikander.

Sreerama Chandra, Indian Idol 2010 winner, is one of the singers here. Perhaps he is the one crooning the 'nasha tera' verse. Compared to Mishra, he is underwhelming.

There is no such confusion about the lone female voice on the track, however. Jonita Gandhi chips in with a powerful performance and easily outshines the men.

Raja Kumari is credited with the rap music but there is no trace of the Indian American songwriter and rapper here. Guess we will have to wait for the extended version.

As for the picturization, there is the same grim, dark setting that we have seen in the 'Allah Duhai' songs from the previous two films in the Race franchise. It makes you wonder whether producer Ramesh Taurani got the songs shot at the same location. If so, director Remo D'Souza has erred.

That Salman Khan cannot dance is not a secret, but he struggles to even lift his legs here. While he has always been known for his unconventional style, Khan looks heavy and unfit here and is verily an eyesore. Director D’Souza, who is also a choreographer, must take the blame for saddling Khan with moves that are clearly beyond him.

Bobby Deol, too, isn’t exactly famous for his dancing skills — he is a Deol, after all — but he gets away as there is not much for him to do.

Anil Kapoor only appears like a ghost while Saqib Saleem just puts in a statutory appearance. 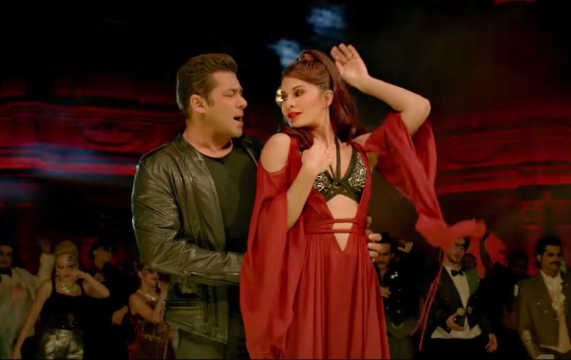 Among the two Race 3 women, Jacqueline Fernandez is head and shoulders above Daisy Shah. The Sri Lankan pulls off some riveting, athletic dance moves. It is a shame that the best dancer in the cast is underutilized in a track that was meant for her.

Like Salman Khan, Daisy Shah also looks slow and heavy. Despite their shortcomings, however, the track is enjoyable for its music. At last Race 3 has a track that can be praised.

Race 3 is set to be released on 15 June. Watch the 'Allah Duhai' track below and let us know what you think of the film's box-office prospects.