I used to be quite mischievous on the sets of Shonar Pahar: Child actor Srijato Bandopadhyay


Shonar Pahar is scheduled to hit the screens on 6 July and the team is currently busy with the promotions. Child actor Bandopadhyay interacted with the audience through a Facebook Live session.

Readers are not to confuse between the celebrated Bengali poet and lyricist and the child actor here. The class two student of Dolna Day School, Bandopadhyay plays an integral role in the film and forms an unusual yet sensitive bond with veteran actress Tanuja's character in the film. His character, Bitlu, helps redefine the relationship between Upama (Tanuja) and her son (Jisshu Sengupta).

Shonar Pahar is scheduled to hit the screens on 6 July and the team is currently busy with the promotions. The film was premiered at the Hyderabad Bengali Film Festival in June this year. Tanuja received the Best Actress award and director-actor Chatterjee bagged the award for the Best Actor in Supporting Role.

On a Facebook Live interaction yesterday (4 July), Chatterjee said that the child actor has been his best friend since the past 6 months. Speaking of his character in the film, little Bandopadhyay said, “I have worked in a film called Shonar Pahar. It’s an entertaining and beautiful film. People will enjoy it. I play an orphan child here,” adding, “Please do watch the film for all”. 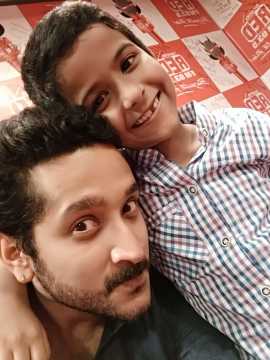 Chatterjee added that the child actor is not at all calm as he was appearing on the live video stream. He is as naughty in real life as his character is in the film. Before the live interaction began, Bandopadhyay was much more comfortable to be on Chatterjee's shoulder than sitting on the chair.

Much like his mentor, Badopadhyay has more friends who are older to him. His best friend is his grandfather, who he calls Bhai and addresses him as he would call a friend of his age.

Badopadhyay was also candid in sharing his experience of working with his Tanuja dida (grandmother), “I went meet her for the first time in the Park Hotel and we soon became friends. You can see in the making videos that she used to cuddle and pamper me. I often used to remind her dialogues on the sets.”

“When we went to shoot in Hanumantak in Sikkim, we collected pebbles. But Maa forgot to bring all of them,” Bandopadhyay added in a sad tone. The young actor recently lost two of his front teeth and Tanuja has reportedly asked for photos of the boy without the teeth.

“Despite having been such a huge fan of Kajol, I have not got the opportunity that Srijato got that day. I have not spoken to her yet,” exclaimed Chatterjee.

Badopadhyay not only got well with Tanuja, with whom he shares the maximum screen space in the film, but bonded well with Jisshu Sengupta, Arunima Ghosh and cinematographer Shubhankar Dhar. Sengupta would repeatedly tease the child actor as he used to talk about his drama teacher Jibana Saha, who introduced him to Chatterjee in his workshop sessions at Nehru Childrens’ Museum.

The child actor proudly said, “I have been quite mischievous on the sets. I used to interrupt the shots if Tanuja dida said wrong lines. I used to take out the earphones from Param da [Parambrata Chatterjee], push the trolley, pull the camera and mess with the lights too.” 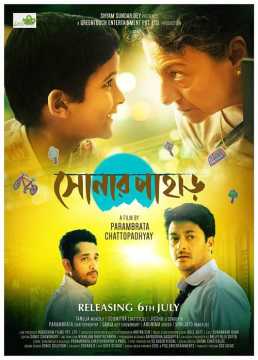 Talking about his experience of working with Chatterjee, he said, “Param da was very good on the sets. One thing that I have noticed in him is that he treats children like adults.” Chatterjee, on the other hand, was quite flattered by Bandopadhyay’s observations.

Chatterjee reportedly met Bandopadhyay for the first time in Saha’s workshop a few years ago. However, he was too small for the role then. In 2017, when Chatterjee finally got on with the project he again went to see Bandopadhyay and found him to be perfectly fit for the role. Chatterjee also feels fortunate that he did not make the film earlier without the young actor.

The director said that he did not have to put any extra effort to form the bond between the Tanuja and Bandopadhyay. In fact, they became friends before Chatterjee himself got perfectly in tune with the veteran actress. Though Bandopadhyay received immense affection from the superstar of the 1970s, there were times when she used to get fed up with his mischiefs and get angry.

Bandopadhyay perfectly caricatured the words Tanuja scolded him with in the hills saying, “Don’t shout! Don’t you know I am a very old woman!”

Already a popular kid in the region now, Bandopadhyay clarified in an interview with a local daily that he does not wish to be an actor. Instead, he dreams of becoming a pilot when he grows up.