The founder of Green Gold Animation and the producer of the animation film, Hanuman vs Mahiravana, spoke to us about the untold story from the Ramayana, the future of Indian animation and what’s next for their studio.

When Rama and Lakshmana are captured by Mahiravana, the step-brother of Ravana, it’s up to the courageous Hanuman to step up and save them. This week, Green Gold Animation’s Hanuman vs Mahiravana, directed by Dr. Ezhil Vendan, hits theatres to show us the thrilling battle between Hanuman and Mahiravana. It is one of two films the studio has up for release in 2018.

We spoke to founder and producer Rajiv Chilaka about the film and what it’s about, Green Gold’s successful character Chhota Bheem and what international co-production the studio has lined up. Chilaka, who was out of the country for an international animation conference, interacted with us via email about Hanuman vs Mahiravana and his upcoming productions. 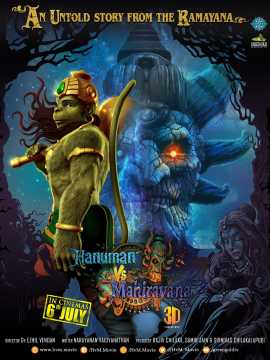 How did the studio select this as yet untold story of Hanuman going up against Ravana's step-brother Mahiravana? How long has the film been in production?

Mythology has a lot of evergreen stories, kids and teenagers these days follow Greek, Roman and Norse Gods. Indian mythology stories depict our culture and heritage and many parents want their children to read and watch our stories. Green Gold Animation has in the past made movies about Krishna and we now bring an untold story from Ramayana, Hanuman vs Mahiravana, releasing on 6 July. The film Hanuman vs Mahiravana has taken close to two years in the making. The movie has been done with various artistes and studios from Japan, Australia, Mexico, India and USA.

What were the challenges in presenting this familiar but yet unfamiliar tale to audiences?

This movie is an untold story from the Ramayana where Hanuman goes into the Pataal Lok (Netherworld) in search of Rama and Lakshmana who have been captured by Mahiravana. While speaking to people, most of them knew who Ravana was, but very few people knew the story of Mahiravana. Hence, we decided to tell this story of the dark, mysterious and powerful sorcerer. Mahiravana is a step-brother of Ravana.

How did you and the film's director Dr Ezhil Vendan decide on the look and design of this world of the Ramayana?

The look of the main characters of Ramayana are pretty much standard but the difficult part for this movie has been the look of Mahiravana and Pataal Lok. After reading few books Ezhil Vendan was able to create a very powerful and evil looking Mahiravana. The creation of the Paatal Lok was also a challenge and interesting. For example, Mahiravana’s army has part of their body as animal and other part like snails/snakes so that they move smoothly.

As an animated mythological film, it seems to deal with heavier themes than previous films? Was this a conscious effort?

Green Gold has usually been presenting kids movies which are more fun and light-hearted. With this movie, we are targeting the older teens and family audiences. Ramayana is known to everyone and this story would be particularly intriguing since it involves a very evil and dark villain — Mahiravana.

There have been other versions and other avatars of Hanuman in animated films, what makes this Hanuman stand out from the others?

In this film, we have presented Hanuman as he should be strong, courageous and intelligent. The 3D animation gave him a real look and you can feel the character as he embarks on his mission to save Rama and Lakshmana. We also have brought out the kiddish side of Hanuman where he is playful and innocent, he does not himself know how strong he is until someone reminds him.

Green Gold's successful Chhota Bheem character completes a decade this year. What is the key to creating characters that will last?

With the ever-changing scope of cartoons, the key to Chhota Bheem’s success is its simple story telling technique. When we launched Chhota Bheem in 2008, our sole focus was to create good content around him, which every kid would understand and enjoy. I will also add that, along with good content, Chhota Bheem has successfully transcended into brand licensing, merchandise, games, events which strongly supplemented Chhota Bheem to become the most loved cartoon show in India.

This will be the first of two films the studio has out this year as Kung Fu Dhamaka is due later this year. What do you hope the audiences will take away from both films?

With Hanuman vs Mahiravana, we plan to showcase the audience the rich stores that reside in our mythology. We want to bring to them interesting stories from Indian mythology and tell it in a visually fascinating way.

Kungfu Dhamaka is an out-and-out entertainment film filled with action, adventure, fun, courage, comedy and it encompasses all the right emotions to make the perfect Chhota Bheem movie for his fans. Both the movies are made in 3D with stereoscopic effects and would be a visual treat.

Last year, you spoke to us at IFFI after a panel and had said, "We are looking at 3-4 years away, probably 2020 or 2021, when India would have a good animation film being made here and released globally. It is just a matter of time." Do you think we are close to competing with international animation studios?

Absolutely. Indian animation is growing at a fast pace and will be catching up with the west. We have shown clips of Chhota Bheem Kungfu Dhamaka to a lot of studios, both big and small, and all have appreciated the efforts and are looking at more such outputs. We have great concepts and a growing number of professional animators.

When you set up Green Gold Animation in 2001, what goals did you have in mind for the studio? Have you achieved those goals? What more would you like to do?

When I started Green Gold 16 years back, my prime goal was to get animation as a serious business and industry. Today with the number of studios  established and the amount of work that is happening, I can say that one of my many goals has been achieved. But there is more to do. I will need Green Gold to make more amazing content, plan bigger productions and create the highest quality animation.

Is there anything you can tell us about Green Gold's upcoming Escape to India which you are co-producing with Argentina? Do you see more international co-productions in the studio's future?

Yes. We would love to be associated with studios with great content. When Gastón [Gorali] discussed the concept and idea of Escape to India, and showed me the character sketches, I immediately fell in love with the project. We felt this is one journey which is not only exciting but has a great story line that connects emotionally.