The debutant director, whose film is receiving rave reviews at various film festivals around the country, spoke to us about casting Priyanka Sarkar, the need for film festivals, financial support and more.

Sayani Ghosh, Arnab Middya and Priyanka Sarkar during the shooting of Andarkahini.
give your opinion

Arnab Middya’s debut film Andarkahini has been getting rave reviews at various film festivals around the country. The film has already been shown at the Hyderabad Bengali Film Festival, Bengaluru International Film Festival and will soon be screened at the 9th Jagran Film Festival.

Priyanka Sarkar, the lead actress of the film, has received the Best Actress Award at the Hyderabad Bengali Film Festival and the Dadasaheb Phalke Award for her act as four different characters in the film.

Andarkahini is an independent film and Middya, who has previously worked as a distributor for a few Bengali and Hindi films, says he is in dire need of financial support to release the film in Kolkata. 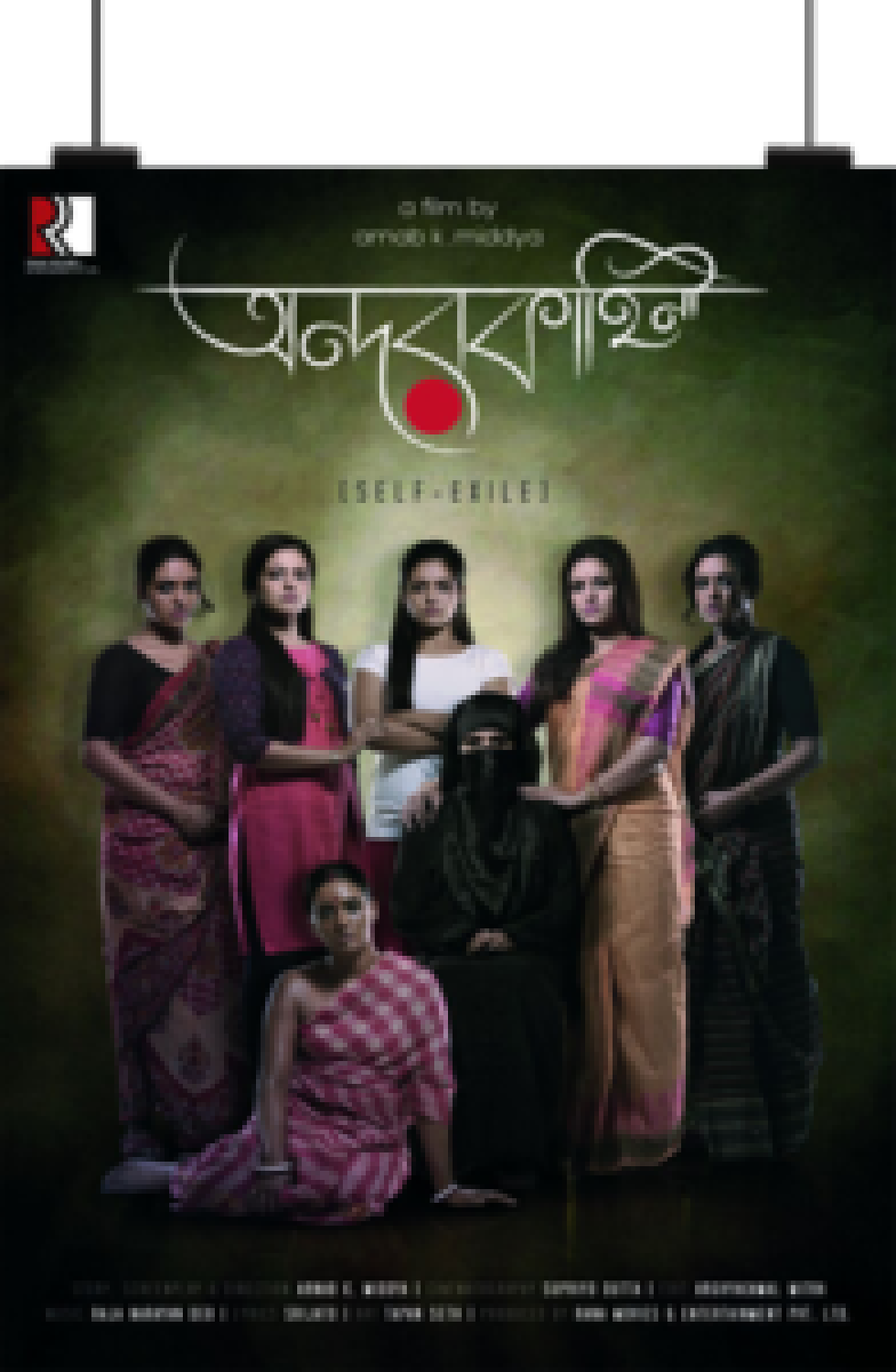 Middya described the entire journey of making the film and shares his motivations to tell four different stories of women in an interview with Cinestaan.com.

Your film has been selected for the 9th Jagran Film Festival. The film has not been released yet, but is receiving good reviews in various festivals. How are you feeling?

See, it was not really easy to make the film as I had a very limited budget and I am a new director. However, I managed to get the best brains in each field for the team. The cinematography has been done by Supriyo Dutta and Arghyakamal Mitra has edited the film. For music, I have got Raja Narayan Deb and the lyrics have been written by Srijato. I did not want a big name for the lead cast of my film; I was rather looking for a good actress. Priyanka [Sarkar] was then not much occupied, so I had told her that I would require her full attention for the film. She has done a brilliant job in bringing out the four shades of a woman. I feel all our efforts are paying off as we have collected a few awards and the film also received a standing ovation at the Bengaluru International Film Festival. Naturally, it’s quite a gratifying feeling.

Why did you make Priyanka [Sarkar] portray the four female characters?

Andarkahini is a story of four women. A woman forms different kinds of bonds with her father, brother, a female friend and her husband. The father-daughter relationship generally continues for a lifetime. Sometimes a girl finds her playmate in her brother or a male friend. But she doesn’t confide in him; normally a girl is a girl’s best friend. Then a girl’s life changes entirely after she gets married. All these relationships have certain social constructs, unsaid rules and conventions that we tend to follow.

Andarkahini recounts the incidents, which take place beyond these social constructs and the ones that we try to hide in our inner quarters. Our education and formalities forbid us to discuss those issues on a public platform. Hence, the title of the film is Andarkahini. Here Priyanka represents the entire womenfolk not a single woman. I could have chosen four actresses for four characters but my intention was not to present individuals, but women in general. Therefore, I thought if I choose a single actress to enact four characters I would be able to establish my point well.

How did you come up with the story?

I cannot think of telling stories that don’t have any connection to the reality. I am not the right person to narrate fantastic tales; I am not good at it. Being a man, I have always thought how difficult it is to know the inner feelings and sentiments of a woman. As long as she doesn’t speak out certain things it’s quite hard to know what actually is going through her mind or what she has experienced. Women don’t have the scope to share a lot happening in their inner sanctums. I wanted to tell those untold stories through Anadarkahini.

You said that you faced a lot of difficulties while making the film, but eventually got the artistes of your choice. Why do you think they wanted to be part of your film?

See, people either work for money or for creative satisfaction. When I approached them, I believe, they felt that my story can get them the latter; they probably had faith that the story would work. At the Hyderabad Bengali Film Festival, one of the top actresses of Bengali cinema expressed her wish to work with me. I told her that I was not sure whether I would have enough budget to cast her. She said, 'Money is not the matter. I can work for free if you can give me a story that allows me to perform'. I feel every artiste wishes to do some work that can take him/her to a better level. I think I have tried to serve that purpose through Andarkahini.

No matter how hard my journey has been I have tried to stay focused. Right now, my financial position is not right enough to release the film in Kolkata. I am praying for a kind soul to extend support. Having seen the response in the festivals, I feel that the film will also be well received by the audience of Kolkata. If people there can connect to the story through subtitles, I am hopeful that the Bengali audience will do the same.

Tell us your journey of becoming a filmmaker.

I come from a completely different background. I studied pharmaceutical technologies, then did a MBA and was posted in the Hindustan Times. After that I started working for NFDC [National Film Development Corporation of India] and got hold of several film scripts. My interest kept increasing and I started exploring more film scripts. I was the project head of West Bengal Tourism which features Shah Rukh Khan. I also worked for a similar project three years ago on National Yoga Day. I also did the marketing of films such as Shanghai (2012), Tasher Desh (2013) and Manjhi: The Mountain Man (2015). While working for these films, I started conceiving a project of my own. You can say I am an accidental director.

Have you wanted to convey any message through the film?

These days there are several mediums to spread messages; film is not the only one. I don’t think I had the intention to convey any particular message. Yes, I have tried to project the reality and in that process if I end up giving out any message that might be the intention of my subconscious mind. Now people are intellectual enough, if they wish to decode any message, they will do it themselves. I don’t think I am here to tell people what to do and what not to.

Why do you think screenings at the various festivals are important?

I don’t want to disrespect anyone, but we have a tendency to accept things better when they receive acclaim outside our own region or country. When a person goes to watch a film, he is not sure whether the film is worth the price of the ticket. He cannot complain to the consumer forum if he is not satisfied with the experience.  In order to have some previous idea, he reads reviews and checks the recognitions the films have received.

I think these festivals help us earn those laurels that push the audience to go and watch a film. Also, I wanted to have a cultural exchange. Audience from different languages and regional backgrounds have been able to experience a different reality through this film. Their opinion and comments have helped me look at my own creation from different perspectives.

Priyanka had said that you are quite methodical on the sets and you pre-plan your shots. How do you think you like to work?

I had to complete shooting the film in 10 days. I could achieve that because of the supportive team work. I had a limited budget; therefore, I had to pre-plan my shots. I did not have the liberty to experiment much. Some people told me that I could have made few sequences bold, but I did not see the need of it. According to me, a concept has to be bold not the scenes. I have also tried to use some metaphors. Though my film has received an A certificate, I feel both a 5-year-old and a 50-year-old will be able to watch the film and perceive them according to their mindsets or points of view.

So when are you planning to release the film in Bengal?

I hope to release the film by the end of this year. Before that, I want to send the film to more festivals. These festivals don’t screen released films. Normally noted artistes are present in these festivals and till now many actors have expressed their wish to work with me after watching the film. Also, as I told you I am in dire need of financial support. Hopefully I get that soon. I am planning my next project with a big production house, but it’s too early to talk about that. They might help me in releasing the film as well.