On the tenth death anniversary of the man who founded the Eagle Films banner, son Umesh Mehra recalls his journey.

Fakir Chand Mehra, better known simply as FC Mehra, had a big role to play from the mid-1950s in creating the larger-than-life identity of mainstream Hindi cinema, also called 'Bollywood'.

However, unlike many others in the film industry, Mehraji, as he was addressed by the fraternity, had neither any training nor any family connection with cinema. In fact, he landed in the field after losing his job for speaking the truth.

"My family hailed from Peshawar [in the erstwhile North West Frontier Province, now in Pakistan] and we are what we call Hindu Pathans," FC Mehra's son, filmmaker Umesh Mehra, said. "Even the Kapoors were from the same city."

FC Mehra got a ground job in the Royal Indian Air Force and was posted to Bombay. Apparently, young Fakir Chand was a straightforward man. When he noticed a British officer involved in some hanky-panky, he informed the superiors. To his consternation, he found himself suspended from service.

This was a big problem, because Mehra's family had moved with him to Bombay. In fact, all his nine siblings and his parents had migrated from Peshawar. The young man had to do something.

"He had a very tough time, as my mother used to tell us," Umesh Mehra said. "But he was a fighter. He tried his hand at different little businesses.” One such was the business of film distribution. "I don't know how it came to him that he should do film business in Afghanistan."

So back in the late 1940s, FC Mehra took some film cans and went by bus, even travelling on the rooftop, to Kabul via the Khyber Pass. Those days the borders were still quite porous. "He showed the film at a cinema there and it was a big success,” recalled Umesh Mehra.

It was a turning point in FC Mehra's life. And thus began his adventure in the world of cinema. “He returned to Bombay and started buying more films and going [to Kabul], and it continued," the son recounted. "Eventually he started buying the rights beforehand, when the film was under production."

One such film, which had got stuck for want of funds, was taken over by FC Mehra. He completed it and that’s how he turned producer. "Then he made Sipahsalar and the journey began," Umesh Mehra said.

His father was a "one-man show", said the filmmaker. “He had one briefcase and he used to write vouchers, run a shoot, talk to the actors and make sure the food is arranged. Then the business grew and other people joined. But he ran a very tall and good ship.”

Asked why he chose Afghanistan, Umesh Mehra said, “We were from Peshawar. In those days, there were a lot of trade routes between Peshawar and Afghanistan. Someone must have given him the idea.”

According to Umesh Mehra, his father had been a hockey player as well. "He used to play for Peshawar. The team used to travel to various cities, and that must have also helped him to make contacts.”

FC Mehra also developed the knack of spotting talent. “His capacity for hard work and his ability to spot talent were well known," Umesh Mehra said. "He would pick the talented ones from people who were struggling.

"One example is the person who directed his first film [Sipahsalar]. He was a gentleman named Mohammed Hussain. He continued to work with my father for a few more films, till the late 1960s. I have met Mohammedbhai a few times myself.”

Umesh Mehra believes his father probably looked for the proverbial fire in the belly of the strugglers. "He would look for someone who would be willing to sacrifice life and limb for the films he wanted to make," he said. "Someone who is not trying to get into the industry just for the alcohol or women.

In fact, FC Mehra was very strict. "He never used to drink or smoke. Despite being in the film industry and working with the top names, he had no blemish on his career or name,” the son said.

Umesh Mehra said his father was also a perfectionist. “Even if he was not on the sets, the list of requirements for the shooting had to be with him a day prior — who all would be there, the artistes, the staff, the number of people eating, every little detail," he said. "So he knew how much money had to go out that day. Cheques were not in vogue then. They would withdraw money from the bank and spend it on a daily basis.”

In today’s digital age, scenes that are shot are edited and viewed immediately to know how well they have turned out. But FC Mehra used to do this even in the days gone by.

“After pack-up, the reels had to come here [Filmcentre in Tardeo, central Bombay]," Umesh Mehra recalled. They would get processed during the night and the rushes would be printed and by 8:30 or 9 am Mehraji would have seen the parts shot the previous day.

"Then he would call up the director or go on the sets to ask why this shot was taken like this or why that did not happen. He had deep knowledge of the process. But it was all self-taught. No institute, nothing. It was all about working hard and being on the job 24x7,” the proud son said. 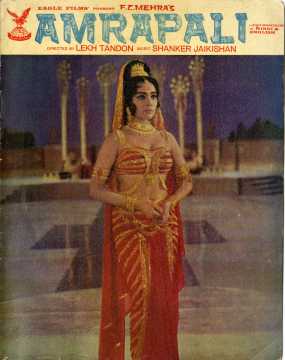 Two of FC Mehra's films, Ujala (1959), starring Shammi Kapoor, Raaj Kumar and Mala Sinha, and Lekh Tandon's magnum opus Amrapali (1966), starring Vyjayanthimala and Sunil Dutt, were chosen as India’s official entries for the Oscars. “In those days, it was a big thing,” said Umesh Mehra. "But the second film didn’t get its due. Ujala was a big hit but not so Amrapali. Financially, it was a loser. In fact, it was the first flop of [FC Mehra's banner] Eagle Films.”

Today, Rajinikanth and Salman Khan are known to reimburse distributors of their films when they make a loss. But Mehraji used to do this back in those days. “We had six distributors we sold our films to," said Umesh Mehra. "But with every one of them his relationship was more in the nature of friend and partner. It was not like, mera paisa toh mil gaya, ab tum mar gaye toh mar jao [I have got my money, now you sink or swim, I don't care]. If a distributor lost [money], he always compensated him. When they lost [money] on Amrapali, he compensated them in the next movie."