Manmarziyaan posters: Vicky is the funky guy, Abhishek the passionate one


The film's makers have released two posters that give us a glimpse of the characters played by the three leads.

Yesterday, the makers of Manmarziyaan announced the advancing of the film's release date by a week. Manmarziyaan will be released on 14 September instead of 21 September as was initially decided.

Now, the makers have also unveiled two posters from the romantic drama.

Directed by Anurag Kashyap, Manmarziyaan has Taapsee Pannu, Vicky Kaushal and Abhishek Bachchan in the lead roles. The film is believed to be a love triangle of sorts.

Going by the posters, Pannu's character seems to have two shades. In the poster with Vicky Kaushal, we see two young people bustling with energy and love.

While he did play a cool cop in Raman Raghav 2.0 (2016), Kaushal has never looked so cool on screen before. With the shades, funky hairdo and earring, Kashyap seems to have given him an image makeover.

Pannu looks like an urban girl, one who is happy in the company of Kaushal's character.

But she has a different look in the poster with Bachchan. Out go the curls and the open hair. What we see is a more traditional-looking Pannu.

Unlike Kaushal, Bachchan comes across as your normal guy. But while he may not be funky, he certainly has passion and love in his eyes for Pannu’s character. 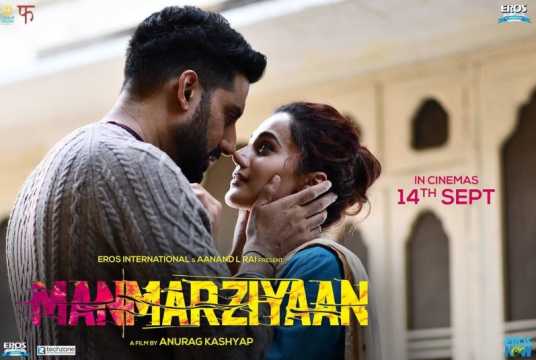 Somehow, the posters and the characters in them reminded us of Mani Ratnam’s Tamil hit Mouna Ragam (1986). That film, starring Revathy, Mohan and Karthik, was the tale of a young woman Divya who reluctantly gives in to her ailing father’s request to marry Chandrakumar (Mohan). But she does not love him and seeks a divorce just one day into the marriage. She also opens up to her husband about her past, when she dated the rebellious Manohar (Karthik) who gets killed.

Of course, in just a little over a month, we shall know if Manmarziyaan has any link whatsoever with Mouna Ragam.

It has taken quite long for this film to get going. Producer Aanand L Rai had first roped in Sameer Sharma to direct Ayushmann Khurrana, Bhumi Pednekar and Vicky Kaushal. There was some talk that Rai was keen to sign rising Malayalam star Dulquer Salmaan for Kaushal's role, but that was not to be.

Then the film ran into trouble with Rai reportedly unhappy with the initial cut. So Sharma left. Next, Rai was keen to sign on Ashwiny Iyer Tiwari to direct it, but the film eventually landed in Kashyap's lap.

Manmarziyaan is set in Delhi and Punjab. Kashyap is not known to make romantic films, and so fans will be eager to see what is the twist he serves up in this film. Marmarziyaan is also scheduled to be screened at the 2018 Toronto International Film Festival.