The actress will play the B-grade actress Shakeela in the upcoming biopic by Indrajith Lankesh.

For a change, Richa Chadha has taken a break from her trolls on Twitter to begin shooting for her next project. The actress will play the B-grade star, Shakeela in her next film directed by Indrajit Lankesh. Chadha is currently shooting in a small town named Tirthahalli in Karnataka.

The latest pictures of the actress in a traditional Malayalam saree, called the Kasavu Pattu, portray the actress playing Shakeela in her younger days. 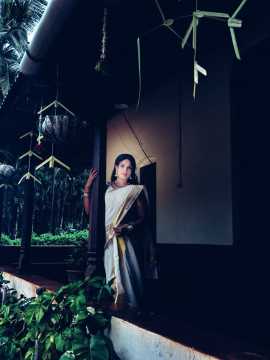 The biopic is based on the life of actress Shakeela who went on to become one of the most popular B-grade actresses of the Malayalam film industry. Since the late 2000s, the actress has found a new lease of career as a supporting and comic actor. Shakeela was last seen in the Tamil film Sakalakala Vallavan (2015) alongside Jayam Ravi and Trisha.

Speaking about the first look for the film, Chadha said, "The challenge for the look of the film but also a good one is that the story traces the journey of Shakeela's younger days to her becoming a popular figure. Thus, the looks span over years and years and with each passing time her look changed and thus to show that is challenging but also for me as an actor it is gratifying that I get to grow with the real character on celluloid. Shakeela is still a legend and we wish to do complete justice to her when the film is ready."