A look at HS Rawail's melodramatic multi-starrer, set against a distant backdrop of the thuggee cult, which was released 50 years ago today (26 July).

Set in 19th century Benares, Harnam Singh Rawail’s Sunghursh (1968) begins with ominous undertones. Powerful temple priest Bhawani Prasad (Jayant) tries hard to separate his young grandson Kundan from his mother (Sulochana Latkar). Many are reverential towards and fearful of the older man. We soon learn why.

Bhawani Prasad, under the guise of religion, lures pilgrims to the ancient temple town and robs them of their riches. He and his loyal band of followers aren’t above committing murder to make sure their methods and traditions continue. At one point, he even has his own son Shankar (Iftekhar) murdered so that his grandson can succeed him in the family ‘business’.

Kundan, naturally, grows up to be Dilip Kumar who disdains all that his grandfather stands for. Watching Bhawani Prasad commit atrocities as he matures, Kundan vows for pacifism. In a brilliant exchange, he tells his grandfather, “Jaanasheen bhi aapne banaya Dada, aur shatru bhi aapne diye. Sab aapki dain hai [You made me your successor, Grandpa, and gave me enemies as well. These are all your gifts].” The film’s dialogues were written by Gulzar and the master Abrar Alvi and add wonderful meaning to certain scenes.

Sunghursh starred the memorable pair of Dilip Kumar and Vyjayanthimala. The stars worked together in seven films beginning with Devdas (1955) followed by Naya Daur (1957), Madhumati (1958), Paigham (1959), Gunga Jumna (1961) and Leader (1964). Sunghursh was their last film as hero and heroine.

The film was based on the story, Layli Asmaner Ayna, by the late writer and activist Mahasweta Devi and was set against the backdrop of the thuggee cult and featured a family feud lasting for generations. However, the thuggee aspect of the story moves into the background and is barely touched upon once the film ventures into a love triangle between Kundan, his childhood sweetheart Munni (Vyjayanthimala) who grows up to be the courtesan Laila, and Kundan’s cousin Ganeshi Prasad (Balraj Sahni). 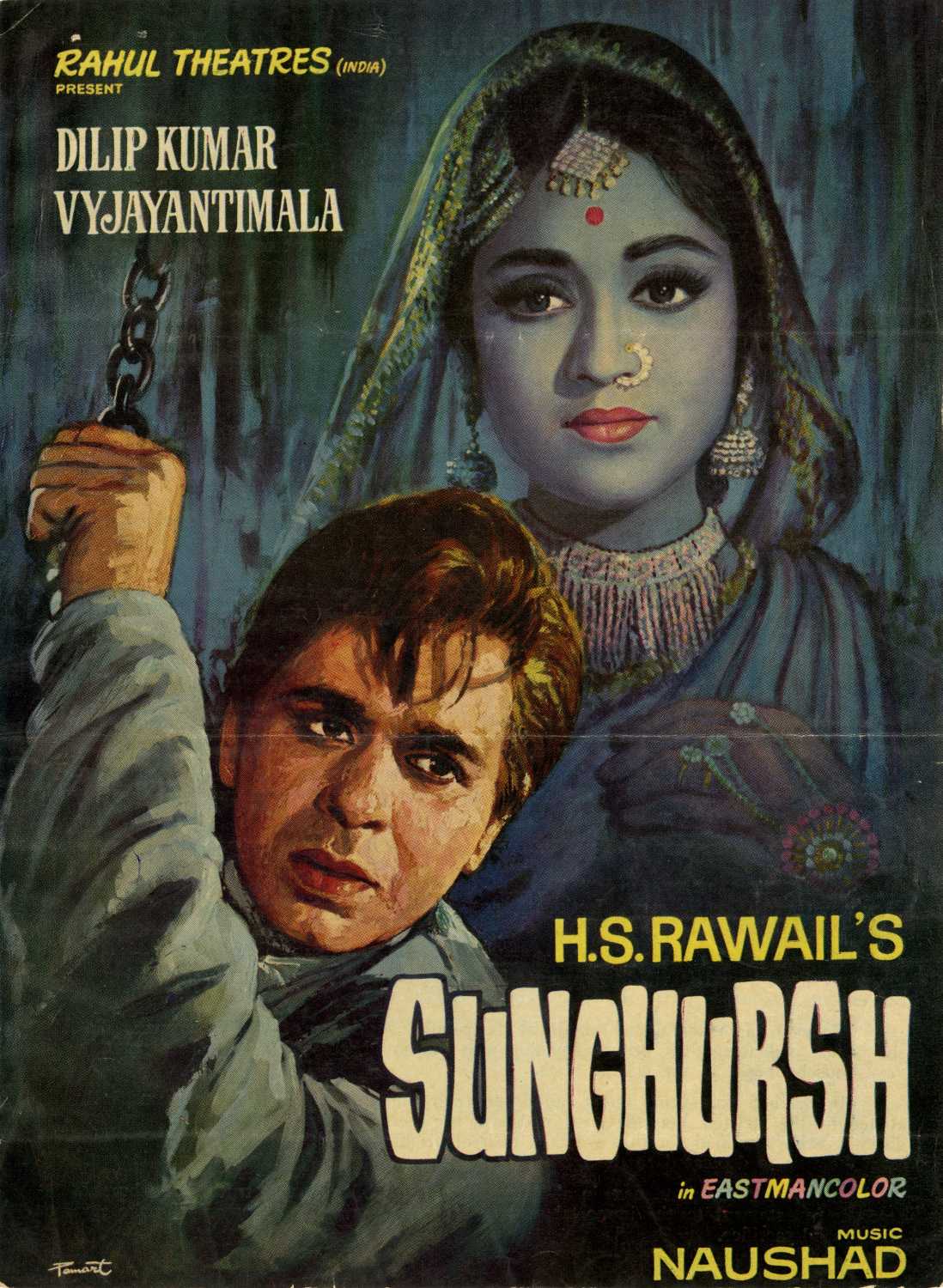 The family has divided itself early on when Bhawani Prasad separates himself from cousin Naubat Lal (DK Sapru). Naubat Lal, too, is a devotee of the goddess Kali but does not practise the thuggee method of looting and murder. However, Naubat Lal is murdered when he tries to expose the truth of Bhawani Prasad ordering the hit on his own son Shankar.

Naubat Lal’s children Ganeshi and Dwarka (a young Sanjeev Kumar) follow the blood feud and want to end it by killing Kundan. Meanwhile, Kundan wants his broken family to be whole again. Will he succeed? Will the bloodshed ever end?

HS Rawail’s film is grand in scheme and focuses on family relations as cousin goes up against cousin, father against son, and grandfather against grandson. In the large ensemble cast, an imposing Jayant along with the avenging nephews played by Balraj Sahni and Sanjeev Kumar stand out as important characters. Sanjeev Kumar got an excellent part among actors of high calibre.

Actresses Sulochana and Durga Khote have to settle for wringing their hands in worry on the sidelines. Of the female cast, only Vyjayanthimala has a strong role as the conflicted Munni aka Laila who has steadfastly loved Kundan all these years but lands in between the arrogant Ganeshi and the self-sacrificing Kundan. The actress is in her element, especially in her dramatic scenes with Dilip Kumar, where she actually speaks her mind.

Author Ashok Raj stated in the book, Hero Vol 1, that Sunghursh “offered Dilip Kumar a rare opportunity to reaffirm his acumen in a narrative set in an authentic historical setting”. The actor, 45 at the time and clearly no spring chicken, still dominated his scenes, especially as all the characters gravitate towards him.

Besides the strong cast, the film boasted of the hit pair of music composer Naushad and lyricist Shakeel Badayuni. But except for the popular and playful Mohammed Rafi number ‘Mere Pairon Mein Ghunghroo’, picturized on Dilip Kumar in the midst of a bevy of dancing village girls, the songs did not have much lasting impact.

Ashok Raj rightly noted that "the film had great potential to emerge as a classic during a time when this genre was being not so earnestly attempted". However, instead of exploring the thuggee inheritance of the character in greater detail, the film focused on Kundan’s love life.

Further, most of the film was shot on studio sets, giving it an insular feel. The film moves between Benares and Calcutta, but the audience can barely tell the difference. 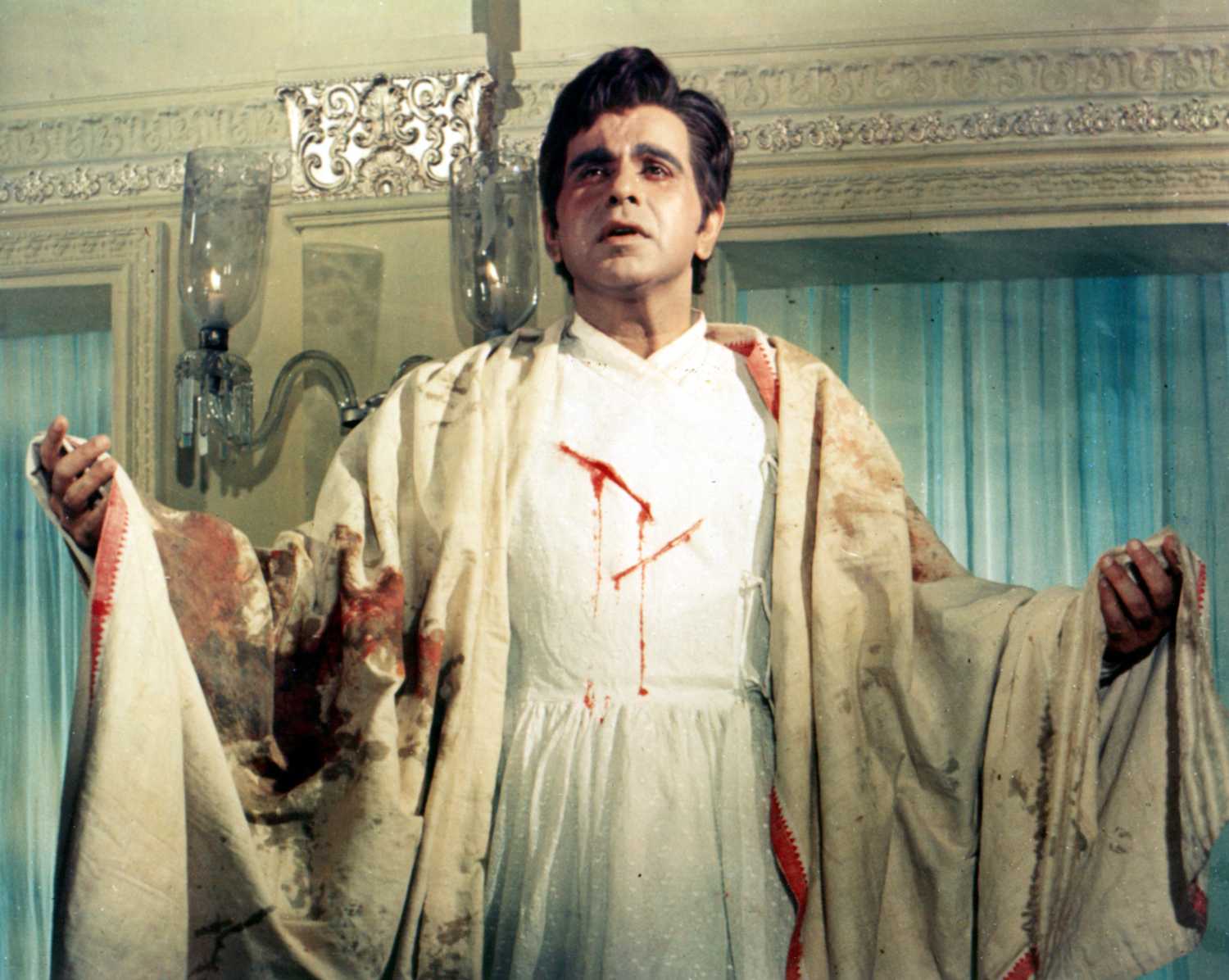 Hopefully, this year’s Diwali release, Thugs Of Hindostan (2018), starring Aamir Khan, Amitabh Bachchan and Katrina Kaif, will delve more into the deadly and mysterious history of the cult. The film has been shot abroad in Malta and Thailand and also at home in Rajasthan. For Sunghursh, the thuggee exploration was ultimately a missed opportunity.