Priyanka Chopra will be joining the team next month.

Actor Salman Khan’s much talked about next film Bharat has gone on the floors finally in Mumbai. Directed by Ali Abbas Zafar, the film also stars Priyanka Chopra and Disha Patani. The team has been prepping for the shoot for a few months.

The shoot commenced after few crew members performed a puja. The picture of the same was shared by the film’s producer Atul Agnihotri, who is also Salman’s brother-in-law. He wrote, “We seek your love support and blessing.”

Zafar shared a moment from the sets of the film today as an Instagram story. It’s a circus set where the most significant aspect is the way a sports bike is hanging. Looks like we can expect some stunts in the film.

The filmmaker spoke about the sets in an interview with BollywoodLife. “The idea is to create an Indian-Russian circus like Raj Kapoor’s Mera Naam Joker. Performers from all over the world are flying down for the circus tricks will be a mix of trapeze hoops and rope stunts. This is Salman and Disha’s introduction in the movie. He plays a daredevil stunt motorcyclist while she’s a trapeze artist,” he said. 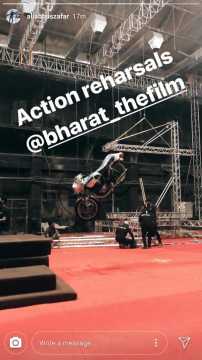 But Chopra won’t be joining in right now. Her scenes will roll next month. Zafar also revealed that she will start her shoot next month with a Holi song with Khan. He also shared that her character will have different avatars as the film will cover a timeframe from the 1960s to the current era.