A musical tribute managed by Klub Nostalgia for the World of Mohammed Rafi Welfare Foundation will be held on 22 July.

In 2016, the World of Mohammed Rafi Welfare Foundation, in association with the singer’s daughters, was formed as 16th Road in Bandra was renamed as ‘Padmashree Mohammed Rafi Road’. The foundation also revamped the Mohammed Rafi memorial at the busy junction of Hill Road and SV Road opposite Lucky restaurant in Bandra, Mumbai.

This year, in honour of the late singer’s 38th death anniversary, a concert will be held on 22 July to raise funds for families of the defence forces through the Fauji Foundation of India.

NR Venkitachalam, a retired corporate executive and founder of Klub Nostalgia who is managing the concert said, “We thought we will form a foundation so that we can keep up a memory of the legend and also perpetuate his memory through his charity work. He used to do a lot of charity without anybody knowing.”

The World of Mohammed Rafi Welfare Foundation addresses deserving social causes. Previously, they have held shows for Vision Foundation, a non-profit organization that helps blind people and those with curable blindness.

This year’s show will help the families of disabled soldiers and war heroes. Venkitachalam revealed that, “Coincidentally, Mohammed Rafi used to go to the war front during the Chinese war in the early 1960s. He used to go and organize shows to raise funds for the army and defence forces.” 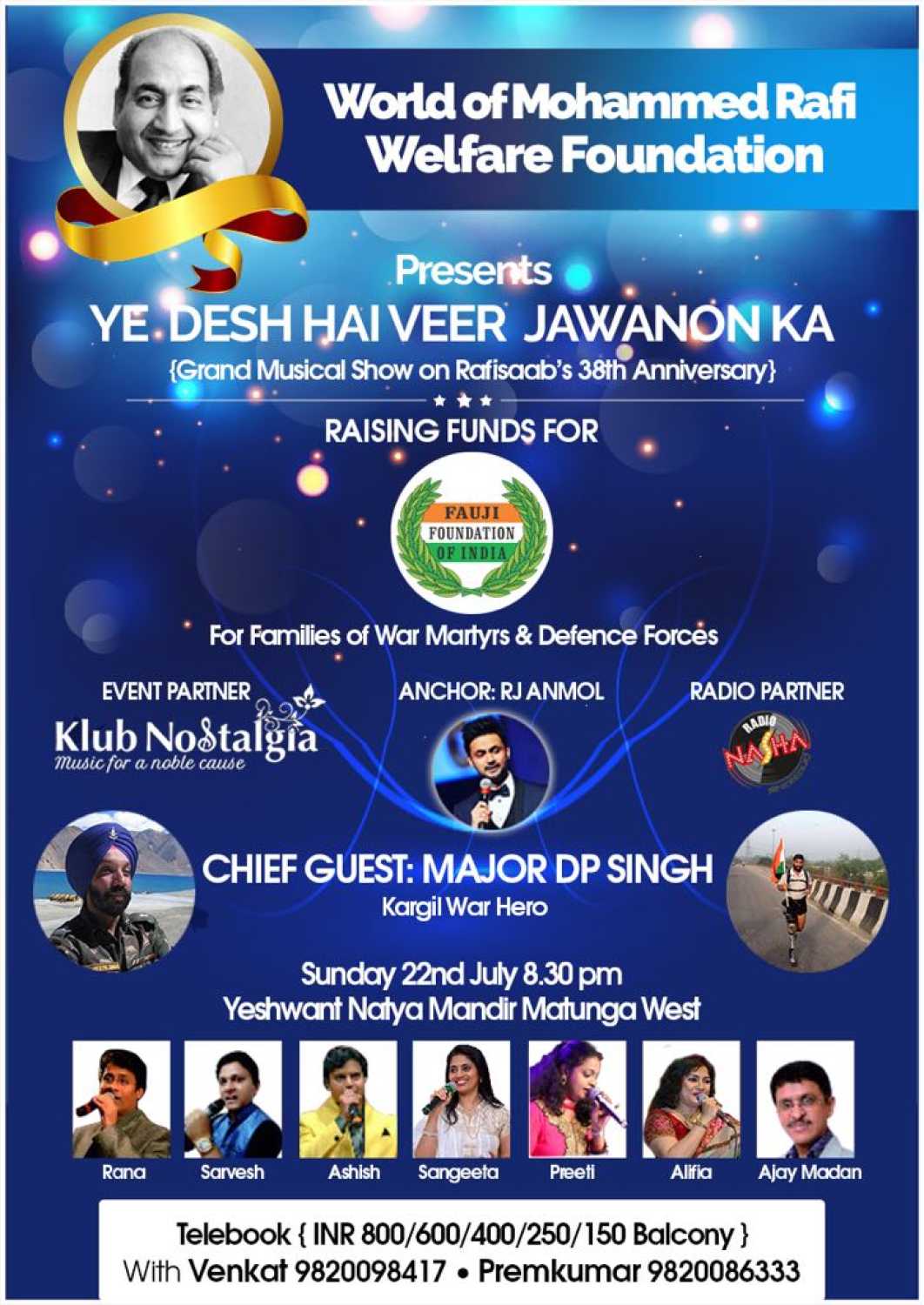 Furthermore, he shared that the legendary singer had sung the maximum number of patriotic songs. So the show is titled ‘Ye Desh Hai Veer Jawanon Ka’ referring to the song title from Naya Daur (1957), starring Dilip Kumar and Vyjayanthimala with music composed by OP Nayyar.

“The show is under the aegis of World Of Mohammed Rafi Welfare Foundation, the event managed by Klub Nostalgia and [it will have a] collaboration with Fauji Foundation. After the show, the entire funds will be given to Fauji Foundation.

The show will have three male singers, Rana Chatterjee, Sarvesh Mishra, Ashish Shrivastav, all Rafi specialists. The female singers are Sangeeta, Preeti and Alifia. Sangeeta has been singing with Klub Nostalgia for 265 out of 272 shows. Singer Alifia is a Shamshad Begum specialist, while Preeti is being introduced with this show.

The orchestra will be conducted by Ajay Madan who has worked with Klub Nostalgia for nearly 200 shows. The show’s radio partners are Radio Nasha and RJ Amol will be the compère.

Venkitachalam, the director of the World of Mohammed Rafi Welfare Foundation, told us about nostalgic favorites sung by Rafi that often get a ‘once more’ by the audience.

“One is ‘Abhi Na Jao Chhod Kar’ from Hum Dono (1961), and then there is ‘O Duniya Ke Rakhwale’ from Baiju Bawra (1952), that song is quite popular and ‘Deewana Hua Baadal’ from Kashmir Ki Kali (1964). It’s very difficult to pick up but these are all songs which get easily identified by the music loving public,” he shared.

Earlier this month, the 78-year-old Venkitachalam organized and facilitated with the naming of 'Chitragupta Chowk' in Khar, Mumbai. The late music composer Chitragupta and his musical career were honoured with the landmark. Chitragupta's sons Anand and Milind Shrivastav were present along with lyricist Javed Akhtar and Sameer Anjaan.