One of the more popular Indian cine artistes in the world, Priyanka Chopra turned 36 on Wednesday and was flooded with wishes not just from fans but quite a few of her fellow actresses too.

Who says film actresses don’t get along with one another? Chopra has certainly made her share of friends in the industry.

Chopra’s contemporaries Katrina Kaif and Anushka Sharma and even younger artistes like Alia Bhatt and Shraddha Kapoor wished her through Instagram stories.

Kaif, who celebrated her own birthday a couple of days ago, posted: “Happy birthday my fellow Cancerian, more power to you, inspiring to watch. Keep shining.”

Kaif has not worked with Chopra in a film as yet, but the Tiger Zinda Hai (2017) star had performed a dance to the ‘Chikni Chameli’ song in the latter's film Agneepath (2012). 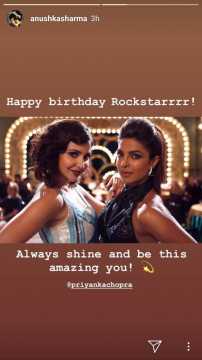 Anushka Sharma and Chopra were both part of Zoya Akhtar’s Dil Dhadakne Do (2015). Sharma called the Quantico actress a rock star. 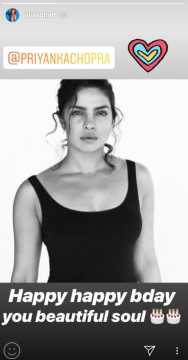 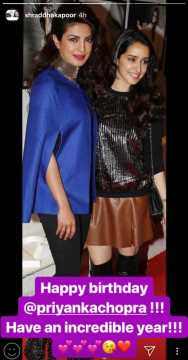 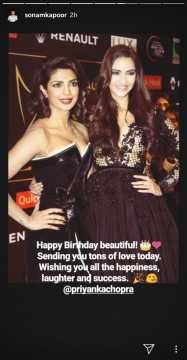 Having made her mark in Hindi cinema, Chopra has gone on to achieve fame internationally too, first as a singer and then with her leading role in the American TV show Quantico and Hollywood film Baywatch (2017).

Chopra returned to India earlier this year as she has taken up the Salman Khan-starrer Bharat that is scheduled for release next year.