With the Supreme Court's landmark decision to read down section 377 of the Indian Penal Code and decriminalize homosexuality, we look at the cinematic journey of LGBT and queer characters from the fringes to more central, positive roles.

In a 2016 interview with Filmfare magazine, filmmaker Karan Johar had said, "People criticized me for stereotyping homosexuality in Dostana (2008), but I am the only filmmaker who put it out on a big scale. It's ridiculous how unaware people were before. The film at least brought the conversation of homosexuality into the drawing room of every urban home."

While Johar might have been overstating his contribution to bringing the issue of lesbian, gay, bisexual and transgender (LGBT) rights to mainstream cinema, Dostana was certainly a key moment.

The film had two mainstream stars playing lovers (even if only as a pretence) in an out-and-out commercial film with an entertaining plot. The film also proved a success at the box office, supporting Johar's claim in a way.

What Johar did not put into context was that by the time Dostana arrived, India was in the throes of a civil movement to reclaim the rights of the LGBT and queer community.

In 2001, the Naz Foundation, a non-profit working for sexual health and against HIV/AIDS, had begun its campaign to read down or revoke section 377 of the Indian Penal Code, which treats the entire queer community as 'criminals' by law.

In 2009, the Delhi high court decriminalized homosexuality, citing section 377 to be a violation of the fundamental rights of the community insofar as it criminalized sexual relations between consenting adults.

However, in December 2013, the Supreme Court overturned the decision, saying only Parliament has the power to change laws. Parliament, of course, lacked the political will to do so, given that a large section of the conservative Indian population remains opposed to homosexuality.

It was during these times that Johar's apparently pathbreaking entertainer broke through. Since then, Shonali Bose's Margarita With A Straw (2015), Hansal Mehta's Aligarh (2016), and Shakun Batra's Kapoor & Sons (2016) have successfully told stories about gay, lesbian and bisexual protagonists in Indian cinema.

In fact, the conversation has improved to the extent that the recent hit, Veere Di Wedding (2018), featured a gay couple who were just that — another couple in the family.

The journey to responsible representation on screen of a community that has often been ostracized has not been easy. From the early 1960s, when the world was waking up to a sexual revolution, Indian cinema continued to cast male actors in female garbs as a comic element. This remained the main form of portrayal, whether it was IS Johar in Bewaqoof (1960) or Shammi Kapoor in Bluff Master (1963), down to Amitabh Bachchan in Lawaaris (1981) and even Aamir Khan in Baazi (1995).

The rare occasions of sensitive, if not necessarily accurate, portrayal were left to the stream of 'parallel cinema'. In Jabbar Patel's Umbartha (1981), the hint of a lesbian relationship between two inmates in a prison is explored, albeit discreetly. This, however, was a rarity. The portrayal of the queer community as outsiders, villains, punchlines or comic elements was the regular practice.

In 1991, Sadashiv Amrapurkar delivered a standout performance as the eunuch, Maharani, ruling the prostitution dens of Mumbai's redlight areas in Mahesh Bhatt's Sadak. Despite the usual showiness and stereotypical manner, Amrapurkar's character was a natural addition to the setting and theme of Bhatt's story. It won him a Filmfare award for Best Villain.

Bhatt again touched upon the theme with Tamanna (1997). A story about an orphan girl adopted by a eunuch (played by Paresh Rawal), the film portrayed a member of the LGBT community struggling with the feminine side of her personality. A sensitive film, it was the beginning of a period of interesting films.

But both these films placed the characters on the fringes of civil society. In Sadak, the eunuch is evil and abhorred, while in Tamanna, detested and ostracized. Neither film sought to portray them as functioning members of an inclusive society.

The 1990s also marked the first courageous moment when a touching and sensitively portrayed lesbian love story caught the attention of the country. Deepa Mehta's Fire (1998) earned the ire of right-wingers who drove it out of cinema halls across the country.

When the Shiv Sena conducted violent 'protests' against the film, then Maharashtra chief minister Manohar Joshi was quoted as saying, "I congratulate them for what they have done. The film's theme is alien to our culture." It seems to be a common calling card that has not changed from then to the recent Padmaavat (2018) protests. 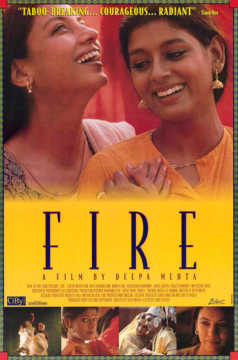 But apart from My Brother... Nikhil (2005), mainstream Hindi cinema continued to wallow in the same stereotypes of the LGBT community. Released in the same year as Onir's film, Sangeeth Sivan's Kyaa Kool Hai Hum (2005) saw the portrayal of a transgendered woman (Bobby Darling) as the butt of jokes. There was also the famous Shah Rukh Khan-Saif Ali Khan bromance in Kal Ho Naa Ho (2003), which hinted at gay relationships as a comic interlude.

The argument that such portrayals are not representative but just dramatic or comic elements in a film plays down the influence Hindi cinema has on its audience. Take the case of stalking and kidnapping that took place in 2016 and the perpetrator's obsession with Shah Rukh Khan in Darr (1993) as an influence on his actions. Albeit an overstatement, it is an example of the extent to which cinema, rightly or wrongly, can be cited as influence. By implication, it becomes imperative for filmmakers to eschew stereotypes to create honest portrayals of the LGBT and queer community today.

It is in this context that films like Aligarh (2016), Kapoor & Sons (2016) and Veere Di Wedding (2018) make for good viewing. There has increasingly been a conscious attempt at portraying the community as a part of society. More so in regional cinema, which has seen films like Jogwa (2009) and Natrang (2010), which took on the gender discourse with a more rural outlook. The Tamil film Aruvi (2017) is built around a kind and friendly transgender woman whose life extends beyond her own identity crisis.

The new millennium also saw a number of gay rights activists and filmmakers like Onir, Sridhar Rangayan, Rituparno Ghosh, and, more recently, Karan Johar, bring the discourse to the mainstream. In fact, the late Ghosh was one of the key contributors. The last decade of his life saw the director deliver some wonderfully nuanced films in Memories In March (2011) and Chitrangada: The Crowning Wish (2012), as well as act in Kaushik Ganguly's Aarekti Premer Golpo (2010).

The right of several members of the community to tell these tales from their own perspective is crucial to improving understanding and portrayal.

Filmmakers are still confronting social opposition to such stories on screen. Raj Amit Kumar's recent Unfreedom (2014) was refused certification by the Central Board of Film Certification (CBFC), leading to its eventual release on the NetFlix platform. The recent, and immensely successful, Sacred Games offers a key position to a transgender character as collateral damage of the rising violence in Mumbai.

Today, the Supreme Court bench led by chief justice of India, Dipak Mishra, repealed Section 377 decriminalising homosexuality under the law. In one portion of the verdict, the judges cited legalist Wolfgang Friedmann saying, "It would be tragic if the law were so petrified as to be unable to respond to the unending challenge of evolutionary or revolutionary changes in society."

It is time the film industry, too, changed their own response to the portrayal of the LGBT community, and their ignored stories.

Note: This report was updated to include the Supreme Court's ruling on the constitutionality of section 377 of the Indian Penal Code.

Margarita with a Straw