Acting in films is 90% less exciting for a serious theatre actor: Adil Hussain


In an interview with us, Hussain speaks about his journey from being a stage actor to venturing into films.

Actor Adil Hussain has not only appeared in a number of films in the past 10 years, but has also emerged as one of the most sought after character actors in various film industries in India.

Hussain, an actor devoted to the cause of good artistic creations, has been delivering commendable performances in Hollywood, Hindi, Assamese, Marathi, Malayalam and Tamil films since 1982. Recently, he appeared in quite a few Bengali films, including Pratim D Gupta’s Ahare Mon (2018) and Saibal Banerjee and Leena Gangopadhyay’s Maati.

Hussain pours his heart as he speaks to us about his journey from being a stage actor to venturing into films. While he finds theatre closer to his heart, he regards acting in films as a profession. Hussain shares a few significant moments from his career that have enriched him and contributed to his thoroughly creative soul. Excerpts.

You come from a very strong theatre background. How has the journey from theatre to film been?

In one word, it has been very educative. Talking about the technicalities, in a theatre, the actor is always on a long shot from the perspective of the audience and he has to reach out to the audience sitting in the last row. While in a film, working in front of the camera, depending on the length of the shot, one has to understand how much acting is not too excess and how less is not too less.

In a close shot, [it is] as if the audience almost comes into one’s lap. Acting then becomes almost similar to whispering into their ears. Therefore, internalizing the emotional process according to the proximity of the audience, in a way so that I don’t reach out too loud has been the biggest lesson for me, as being loud had been my habit since I have been a stage actor. This was one of the aspects that I had to work on and I am still working on.

The other aspect is the quantity of the audience that one is exposed to. At this point, I really miss the theatre audience. Now since more people are aware of me, I always have to be aware of my public persona, my clothes, etc. When one is not that popular one can be more of one’s own self while performing.

You know, these days I really miss having tea on the footpath, I feel it is a kind of intrusion on my freedom. Sometimes, I feel I should have thought about it more. At the same time, I have always loved watching films and I wanted to be part of films, learn the acting in it. One has to pay for the consequences!

Also, I would say, acting in films is 90% less exciting for a serious theatre actor. It is not the performing part but the preparation of months to put up a play and the rehearsals. I miss that a lot. While acting in a film one gets the script then and there, if one is lucky then one gets it one day in advance.

On the sets you meet your co-actor for the first time and you are like, 'Oh, she is my wife.' These are all okay, but I am saying that these are only okay! It is not that enriching. I love acting because it enriches me and introduces me to the unexplored parts of myself. In Indian cultural context — I don’t blame anybody for it as I fully understand the monetary issues, the artistic bombings — but the directors here do not provide the actors the time to know their co-actors, to get into the skin of the characters and to explore the scenes the way it happens in the theatre.

Also, I wish theatre had money, but unfortunately, it doesn’t. So I will have to pay my bills and back theatre through working in films.

So, right now you are not into any theatre project?

I am, but due to my engagements in films, I have not been able to put up the play yet. It is written by my dear friend, actor and director Dilip Shankar. It is based on a conversation between Arjun and Krishna and will be a solo act.

How did the first film happen?

There are few first films actually in different stages of my career. My first film was an Assamese film directed by my co-actor and director in 1982, when I was a teenager. My first Assamese feature film was in 1985. I acted in a play and then the writer turned it into a film script and wanted me to act in it. In NSD [National School of Drama] we had done a play on Othello. After graduating from there, a film was made based on the same plot and I acted in it.

My first Bollywood [Hindi mainstream] film was Ishqiya in 2010. One of my co-actors in a TV-series asked me to audition for the role in that film. Then Abhishek Chaubey flew to Delhi to meet as I was not really eager to act in films. But he managed to convince me and I owe him 10% of my earnings! [laughs]. He literally started my Hindi film journey. Ishqiya became popular and people sort of noticed me. I must say that the people from Hindi film industry have been extremely kind, generous to me. I am grateful to all the producers and directors who have accepted me and taken care of me. I am grateful to them for this incredible journey.

I don’t know how they became aware of me. I was in Delhi when I got a call from one of their co-producers. They wanted me to act in the lead role and they wanted my confirmation within a few hours as the shooting was supposed to begin from the day after the next day. Irrfan [Khan, actor] was initially chosen to play the role, but he walked out due to reasons unknown to me. So, yes, I agreed to do the film at once.

Yes. How did that happen? Well, I was sitting in my living room in Delhi when Dilip Shankar, who is also a casting director, called me and asked whether I was free to read a few lines from a scene the next evening. I agreed. Then he called me in the evening and asked me to read the lines that night. I said if there were not too many lines, I was ready for it. I did not know that I was being asked to read lines from Life Of Pi. Then I received the scene on a mail and got to know the truth!

Then I got a call from New York and got to know that Ang Lee wanted to meet me in Mumbai. That was, perhaps, the first time that I booked a ticket right then and flew to Mumbai. It was an amazing meeting. He only wanted to speak to me, that’s all! We spoke about acting, life and so on and then I got the role. It was such a humbling experience working with him. He is one of two most humble directors I have worked with in my career. He has a sincere humility, no pretension whatsoever. It was indeed a learning experience for me.

So, who is the other director?

The other one is Subhashish Bhutiani, the director of Mukti Bhawan (2016). He is so young, but I find it quite inspiring the way he looks at life with a lot of humility.

You were paired with Sridevi in Gauri Shinde’s English Vinglish (2012)...

That was totally out of the blue! Though we were of same age, I grew up watching her. I had watched Sadma (1983) and her performance shook me to the core. I never imagined that I would act with her. I was shooting for Life Of Pi in Pondicherry when I got a call from one of the casting members of English Vinglish and he asked me record a few lines and send them. The next day R Balki confirmed me for the role.

It was an extra-ordinary journey working with Gauri and Balki, they make an amazing couple and they are amazing human beings as well. On top of that working with Sridevi, who by then had done 298 or more films and I was merely 2 or 3 films old, was fun indeed.

Recently you have been working in a lot of Bengali films, how has been the journey so far?

I feel at home in Bengal. You know that I am an Assamese. I have been influenced by the Bengali music, literature, magazines and films since my childhood. So, coming to Kolkata is like a homecoming for me, Bari eschi mone hoy! [Feels like am back home!].

I feel that a certain number of directors in Kolkata are making very meaningful films, though I am yet to see the craft through which they press the narrative cinematically. That part will slowly improve, I guess, as they learn on the floor and not in any institution. I feel their intentions are very good. I feel it is my artistic responsibility to support such good initiatives. Right now, I am dubbing for Obyakto and have also acted in a short film by young director Abhirup Basu. I am hopeful about these works and I feel great in Kolkata.

Can you please talk about your character in Maati? 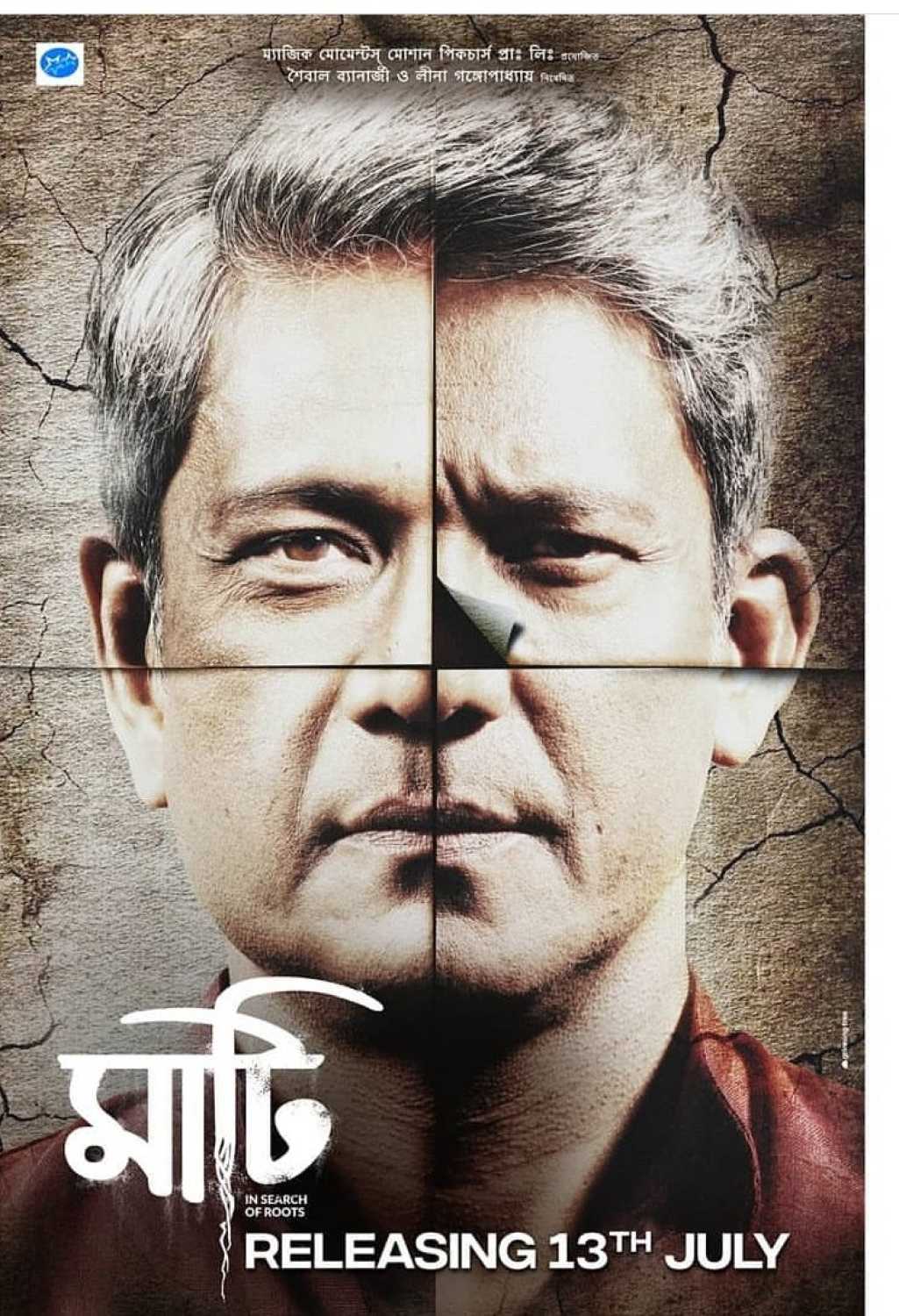 I play a role of a person who represents the archetype of people who despite going abroad and having the facilities, opportunities and material luxuries there, are still drawn to their own area where they were born and brought up. I have been one of them, fortunately. I was offered a job in Holland after I stayed there as an actor and a teacher for 3 years. But then I refused because as an artiste it was for hard me to feel a belongingness there.

In Maati, my character Jamil comes back to Bangladesh despite his bright career in abroad. He tries to help the country that needs him and his service. He tries to improve the scenario and meets a woman from India who is also on a quest to find her roots. It is a story of reconciliation, of coming together of people from two countries that used to be one.