No official announcement has been made regarding to Shotgun Shaadi so far.

In 2014, actor Sidharth Malhotra had teamed up with Parineeti Chopra for filmmaker Vinil Mathew’s romantic comedy Hasee Toh Phasee. The duo are set to reunite for another rom-com, rumoured to be called Shotgun Shaadi.

Casting director Mukesh Chhabra’s agency put out a post on Facebook looking for people for the supporting cast. The team will conduct auditions in Lucknow on 13 and 14 July. The post had first mentioned the names of Malhotra and Chopra being in the cast, but later the agency removed the actors’ names. 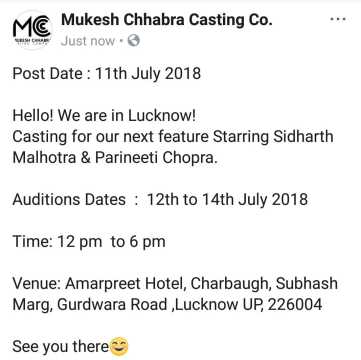 No official announcement has been made regarding to Shotgun Shaadi so far. After Aiyaary (2018), Malhotra had confirmed doing the Vikram Chandra biopic. The actor was slammed by Bhojpuri fans, actors Neetu Chandra, Manoj Tiwari for insulting the Bhojpuri language.

Shotgun Shaadi presents him an opportunity to win over fans from Bihar and Uttar Pradesh.