The fashion designer wrote a passionate response on the twisted relationship on the fashion and film industry. It was then shared on social media by fellow designer Rohit Bal, sparking more attention.

Fashion designer Shahab Durazi has been in the business for three decades since 1988. He has made a name for himself with his ethnic Indian fashions for his eponymous label, Shahab Durazi. A few days ago, the designer wrote a long, impassioned plea about the malaise in the fashion industry that had been on his mind for awhile.

Durazi's views were brought to light as fellow designer Rohit Bal shared his thoughts on social media causing instant discussion and debate. Bal has since deleted his Facebook post, but screenshots of his post are available online. 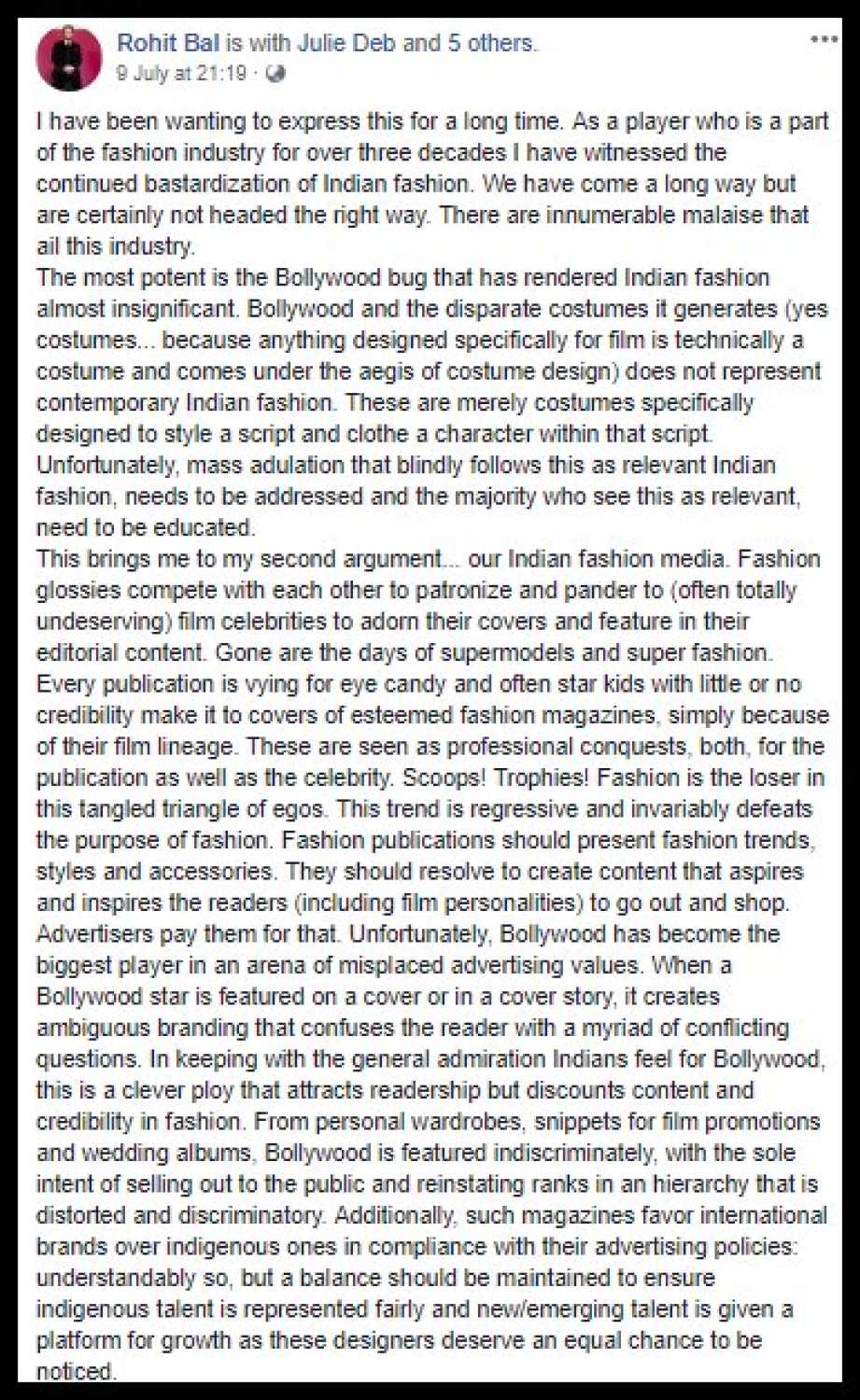 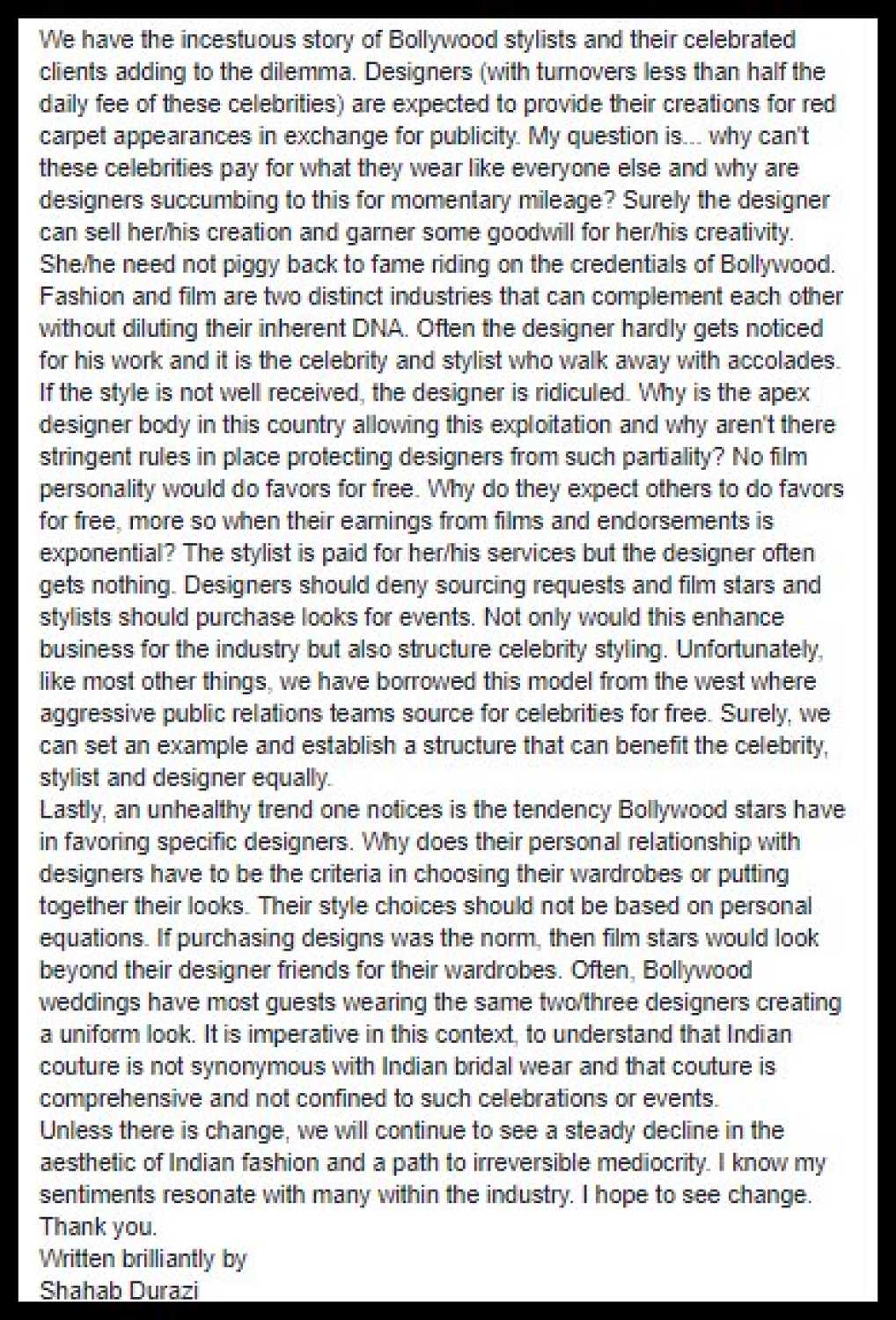 Durazi has stayed away from designing for the film industry. While celebrity artistes like Aishwarya Rai and Arjun Rampal have walked the ramp for him, the designer hasn't worked on any film. In his rant against the twisted relationship on the fashion and film industry, he explained why, saying the "Bollywood bug has rendered Indian fashion almost insignificant".

He pointed out that "Bollywood [Hindi cinema] and the disparate costumes it generates (yes costumes… because anything designed specifically for film is technically a costume and comes under the aegis of costume design) does not represent contemporary Indian fashion. These are merely costumes specifically designed to style a script and clothe a character within that script. Unfortunately, mass adulation that blindly follows this as relevant Indian fashion, needs to be addressed and the majority who see this as relevant, need to be educated."

Durazi said that fashion magazines these days feature mostly film celebrities and the days when supermodels and super fashion graced their covers are long gone.

"Every publication is vying for eye candy and often star kids with little or no credibility make it to covers of esteemed fashion magazines, simply because of their film lineage. These are seen as professional conquests, both, for the publication as well as the celebrity. Scoops! Trophies!," he exclaimed.

These trends are hurting fashion, the designer stated. "Fashion publications should present fashion trends, styles and accessories. They should resolve to create content that aspires and inspires the readers (including film personalities) to go out and shop. Advertisers pay them for that. Unfortunately, Bollywood has become the biggest player in an arena of misplaced advertising values. When a Bollywood star is featured on a cover or in a cover story, it creates ambiguous branding that confuses the reader with a myriad of conflicting questions," Durazi rightly pointed out.

Content and credibility is being lost in the fashion industry according to him. Furthermore, he felt that fashion magazines promote international brands over indigenous brands. By doing so, there is no balance and no platform for young new talent from within the country.

Durazi called out film celebrities who expect designer's creations for free for red carpet events. He said this was a problem of "Bollywood stylists and their celebrated clients".

"Designers (with turnovers less than half the daily fee of these celebrities) are expected to provide their creations for red carpet appearances in exchange for publicity. My question is… why can’t these celebrities pay for what they wear like everyone else and why are designers succumbing to this for momentary mileage? Surely the designer can sell her/his creation and garner some goodwill for her/his creativity. She/he need not piggy back to fame riding on the credentials of Bollywood," he continued.

He added that, most often, a celebrity's stylist gets the recognition for the outfit and a designer's work get ignored.

"Why is the apex designer body in this country allowing this exploitation and why aren’t there stringent rules in place protecting designers from such partiality? No film personality would do favors for free. Why do they expect others to do favors for free, more so when their earnings from films and endorsements is exponential? The stylist is paid for her/his services but the designer often gets nothing. Designers should deny sourcing requests and film stars and stylists should purchase looks for events. Not only would this enhance business for the industry but also structure celebrity styling. Unfortunately, like most other things, we have borrowed this model from the west where aggressive public relations teams source for celebrities for free. Surely, we can set an example and establish a structure that can benefit the celebrity, stylist and designer equally," Durazi asked.

The fashion designer was also straightforward in bringing to light the "unhealthy trend" of stars favouring specific designers for their films.

"Why does their personal relationship with designers have to be the criteria in choosing their wardrobes or putting together their looks. Their style choices should not be based on personal equations. If purchasing designs was the norm, then film stars would look beyond their designer friends for their wardrobes," he said.

Finally, the designer warned of the dire consequences of the "continued bastardization of Indian fashion" and revealed that many within the industry agreed with him. He ended his post hoping for change.