The film will be directed by Amit Ravindernath Sharma of Badhaai Ho (2018) fame.

A number of mainstream heroes of Hindi cinema have been doing a sports biopic or a sports related film. These include the likes of Aamir Khan, Shah Rukh Khan, Salman Khan and Akshay Kumar. The recent example is Diljit Dosanjh, who is playing hockey player Sandeep Singh in his biopic Soorma, which hit the theatres today.

Now, the latest to join the bandwagon is Ajay Devgn, who will play Syed Abdul Rahim. Rahim is considered the architect of Indian football, as reported by Bombay Times. The film will be directed by Amit Ravindernath Sharma of Badhaai Ho (2018) fame and produced by Boney Kapoor. This is Devgn’s first sports film.

Born in 1909, Rahim was the coach and manager of India’s football team from 1950 onwards. Under his tenure, India won the Asian Games in 1951 and 1962. In 1956, India reached the semi-finals of the Melbourne Olympics, which is India’s biggest football triumph till date. He passed away due to cancer in 1963.

Speaking about the film, Kapoor told the publication, “I was amazed that not many are aware of someone as significant as Syed Abdul Rahim. He’s an unsung hero whose achievements must be saluted. His team had heroes like Chunni Goswami, PK Banerjee, Balaram, Franco and Arun Ghosh. It takes someone like Ajay Devgn to play Syed Abdul Rahim. With him on board, I can just hope that our film inspires youngsters to play football, and India soon brings the World Cup home.”

Kapoor was stunned to know the real story of Rahim. "It’s amazing to see football, the world's biggest game, having such a fever in India, and yet our team is not being sent to important tournaments. When my partners Akash Chawla and Joy Sengupta brought me the true story of Syed Abdul Rahim, I was amazed that not many are even aware of this unsung hero and the achievements of that great team," he added.

Just a couple of days earlier, Devgn announced that he would be playing Chanakya in a film directed by Neeraj Pandey. 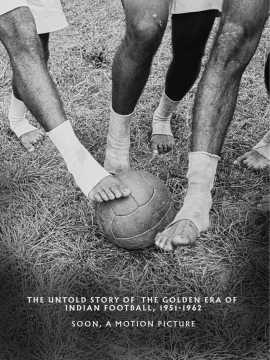