The three-episode horror series was originally conceived and shot for the big screen.

In 2014, Blumhouse Productions [makers of Hollywood films like Get Out (2017) and Insidious (2011)], Phantom Films and Ivanhoe Pictures signed a three-project deal to create content in India. The shooting for their first project Ghoul, the trailer for which was released yesterday, began in January 2016.

At the time, Ghoul, written and directed by Patrick Graham, was supposed to be a full-length feature film. Actors Radhika Apte and Manav Kaul, who play the lead parts, had shot for it for the big screen. Ghoul was ready to be released for several months.

However, later, the makers felt that a longer format could do better justice to the story. And soon work on turning the feature into a mini-series began. While more portions were shot to add depth and length to the show, the episodes had to be edited accordingly too.

After being in the wings for a while, digital streaming platform Netflix bought the rights to the project in February this year, making it the first Indian supernatural thriller on Netflix's portfolio here.

Nitin Baid, who edited the three-episode show, spoke exclusively with Cinestaan.com on how the transformation happened. "Patrick [Graham] had figured the structure quite clearly once it moved into a mini-series format. We shot some new stuff which added a layer to every character and created more depth overall. Primarily, with a mini-series it was to figure where we start and end. Patrick had figured the cliffhanger moments from the film and the rest was quite easy," said Baid.

On working with director Graham on the editing table, Baid said, "The script was our bible to begin with and once we had a rough cut then it was all about selecting the best and removing the rest. Patrick was quite clear about certain things and some bits we sort of figured on the way. Our discussion was primarily to keep the film as tight as possible and keeping the tension brewing throughout."

The editor says that it wasn't that tough to edit the mini-series as the material naturally lent itself to a short format streaming show. "We just had to be honest to the material. I don't think there was any particular discussion about it, but we sort of always knew what we were doing so it was primarily keeping it honest, straightforward and removing the fat," he said.

Starring Apte and Kaul, Ghoul focuses on a young woman working at a military detention facility when a strange and scary prisoner arrives to be interrogated. Not much of a talker, the prisoner turns the tables on his interrogators, exposing their most shameful secrets, but with a supernatural twist.

The definition of ghoul in the Oxford dictionary could give audiences a hint of what to expect: an evil spirit or phantom, especially one supposed to rob graves and feed on dead bodies, originating in the late 18th century Arabia's desert demon believed to rob graves and devour corpses. 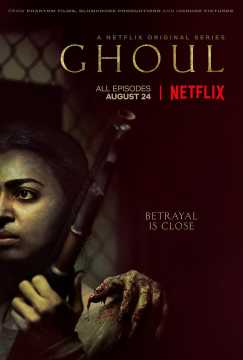 “It has been a great experience working closely with Netflix and our partners at Phantom and Ivanhoe to produce Ghoul. This is Blumhouse’s first foray into the horror genre in India and we are excited to share this project with horror enthusiasts around the world,” said the Emmy award winning producer, Jason Blum, in a statement.

Coming hot on the heels of the success of Netflix's first Indian original, Sacred Games (also a partnership with Phantom Films), based on Vikram Chandra's novel by the same name, Ghoul is likely to grab eyeballs.

Ghoul will be released on 24 August.