Whether you sing or play an instrument, the discipline is the same: Pandit Brij Narayan


The sarod maestro speaks about the experience of working with musicians like Yehudi Menuhin, the discipline needed for classical training, and why the future of classical music is bright.

It is easy to be awed by Pandit Brij Narayan. Genial, calm and composed, he is the son of the great Pandit Ram Narayan, an ustad of the sarangi. But it was the sarod that caught Brij Narayan's attention.

Learning under the tutelage of Ustad Ali Akbar Khan, and his own uncle, the tabla player Chatur Lal, Brij Narayan chose the sarod. But the discipline remains the same, he warns us.

So did the pursuit of excellence. Starting from his performance at the 1972 Munich Olympics, Brij Narayan set out on tours of Europe, Africa and America. His tours brought him in contact with artists at the pinnacle of the music world. Among them was the violinist and conductor Yehudi Menuhin.

Brij Narayan's talent was noticed by several established composers in the Hindi film industry as well, like Laxmikant-Pyarelal and Shiv-Hari (Pandit Shiv Kumar Sharma and Pandit Hariprasad Chaurasia). Slowly, films too became one of the many projects he was involved in. From Main Tulsi Tere Aangan Ki (1978) to the Hugh Grant-starrer The Bengali Night (1988), his film journey has been as eclectic as his taste for world music.

But, he believes, the authenticity of a music should not be tampered with. Now working with the Pandit Ram Narayan Foundation, Brij Narayan is looking towards a future of students learning the art of these classical instruments. Unlike many who complain of fading interest, Pandit Brij Narayan is optimistic.

"Once the information about the nature and essence of classical music spreads, the future will present itself," he smiles. Excerpts from an interview:

You started to learn music under the tutelage of your father, but you chose the sarod. Why?

Both my father and my uncle taught me. Of these, my uncle was the eldest, and my father was younger to him. I was the first-born of my generation. So, naturally, I received a lot of love from the entire family. This is the reason my uncle took me under his wing from an early age. I stayed more with my uncle during childhood than with my father, in Delhi. There, I was taken as pupil by Pankaj Verne. He was a renowned tabla player, who travelled for the first time to the United States in 1955 with Ali Akbar Khan.

My exposure was more towards instrumental music — the sitar, sarod, etc. I used to love playing with Ustad Ali Akbar Khan. I was fond of his work even in childhood.

The second thing is that the sound of the sarod was something I loved. The deep sound, its sombreness, was something that attracted me. My father was a great sarangi player, but this is a medium. For him, the sarangi is the medium while the sarod is the medium for me. But the music remains the same.

We play classical music. The ragas and raginis, whether you sing them or play them on an instrument, on a sitar, or a sarod, or a violin, the discipline remains the same. I never had any difficulty in learning the instrument.

You also learnt singing before you turned to the sarod.

I know singing because my father sings very well. My uncle, Pandit Chatur Lal, when he died in 1965, I was hardly 10-11 years old. It was then that I came back to Bombay [now Mumbai]. I kept learning and working on my sarod, but my father advised me in a very interesting way.

You see, technically, sarangi and sarod have the same main strings. Sarangi has the 'sa pa sa', while the sarod has 'ma sa pa sa'. When people talk of singing, the sarangi is the instrument that comes closest to emulating the singing voice. My father taught me the shifting to help use these chords in the best way. This made it very easy.

Then, the technical aspect of playing the instrument I learned from Ustad Ali Akbar Khan. Once you have learnt the technique, the strokes, the chords, the second part becomes very easy. Ustad Ali Akbar Khan settled in America in 1957. He would come to India only to play at concerts. I couldn't go along with him everywhere since I was too young. We would meet occasionally, and he would sit down to teach me the techniques of the instrument. But I learnt the music from my father.

Laxmikant birth anniversary: 10 Laxmikant-Pyarelal songs that will get you up and moving

There is no question that your father's role in your career was very important. He even played a key role in your first recording, if I am not wrong.

My father has always been gracious enough to keep an eye on my career. Not like I did not get scolded, but I am very thankful for it. In 1971, my father took me on a tour of Europe. I had a concert in Paris. I did have concerts in other places like Holland, Switzerland, Paris, etc. But Paris is Paris. There, a Madam Jeullerat approached me and said, "Would you do a recording with me?"

Classical Music of the World was the name of their label. I said, "Of course, it is a big honour for me."

The next day, she met us again at the house of a close family friend. She was 80+ at that time. She told me a date for the studio and said I could record in a week. I practised continuously for five days. On the day of the programme, my father took up my training all night. He taught me what to play, what sur would be good. I chose two ragas, a morning raga Shuddha Todi. The other was a night raga, Koshikanga. The session went on till 4 in the morning, and I had a recording at 9 in the morning.

I went straight to the recording studio. I was surprised to find my father at the studio at 9:30 am. I was very surprised since he had casually told me to go and record the pieces and come back.

Incidentally, the tanpura available was not set in tune. It was always difficult to travel with both, the tanpura and the sarod. He himself took up the tanpura to help me find the raga. Then he conducted me so beautifully. He directed me how long the alaap should be, how long the sargam should be. He then asked me to pick up the pace, and control the taans. My first recording was a marvellous one. It was my father's blessings that shone through in that.

When you started out in films, what was the experience like? You have worked with some giants like Laxmikant-Pyarelal and RD Burman.

Laxmikant-Pyarelal were good musicians. Pyarelal, in particular, was a very intelligent man. In films, I must have played more than 1,000 songs. With L-P [Laxmikant-Pyarelal], the advantage was that when I said something, they would listen. If I would say, "I want to play this way or change a tune a bit to this", they would agree. Generally, the composer sets the tune on a piano or a harmonium. So he has no idea how the instrument plays a part in his composition or the instrument's technicality.

Suppose the song is composed in a sur that doesn't fit the sarod, and if you do play it that way, it will sound grating to your ears. Pyarelalji would understand this technical side of things. That is why I played a lot more for them than for anybody else. 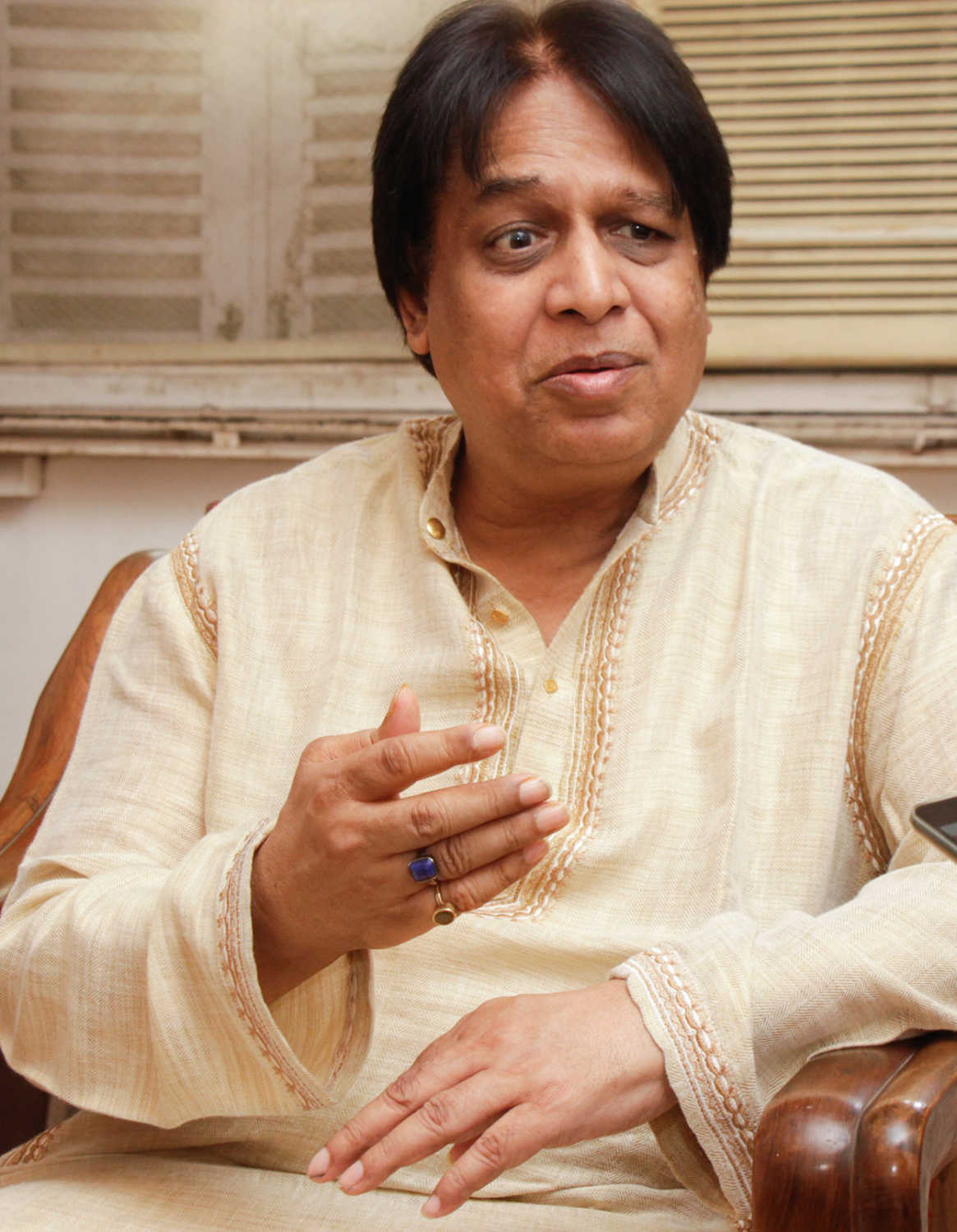 How much does a classical music base help music composers?

It does help to a great extent. If you take Jaidevji, a fabulous composer, he would understand [the nuances]. There were several others, like Bappi Lahiri. When I would approach him with a suggestion, he would accept it immediately.

There is also the matter of the individuality of the instrument. If the sarod is played like the mandolin or the guitar, or if it is not in the language of the instrument, you will only hear the sound. It will then be the sarod but not the essence of it. Since I have a very strong classical base, I didn't want to disturb the character of the sarod. Hence, when I used to choose songs, the essence of the sarod would be maintained. I also played for Shiv-Hari when they composed for films.

One thing I always felt was that there isn't sufficient information being spread about classical music. Information is vital. Suppose you are travelling in South India, then the sound of the nadaswaram, or the mridangam, or the veena are an essence of [the region's] culture. Similarly, every state has a particular sound. If you go to Rajasthan and hear the sitar, you might feel out of place. In Rajasthan, the sarangi rules, the ravanhatta echoes. This knowledge of the innate culture of the place is lacking.

Why is it that this information is lacking? What holds it back?

The reason for this disparity is that everybody wants quick entertainment. Some things, like classical music, are not there for entertainment, they are serious things. People don't want to go into these things because they will have to devote time and attention and put in an effort to understand. All they want is quick results. If it is a film, it should be entertaining. If it is a song, it should be entertaining. The serious work is often left behind.

Sadly, even the artists sometimes give the people what they want. So that they can consume and digest it faster.

I have regularly been playing at international concerts from an early age, thanks to my father. I met Yehudi Menuhin and other great concertists like him or Rostropovich [Mstislav Rostropovich, cellist]. I kept interacting with such talented personalities, imbibing their experiences.

I found an opportunity with a film called Bengali Nights, playing music for the film. I recorded for the film in Paris. It had a combination of two sounds, jazz and Indian. I said I will only give Indian music because the character was coming to India, hence Indian instruments should make up the major essence. Thankfully, they agreed.

The film's music was appreciated a lot outside the country.

You are always involved with the instrument. You are also into teaching. What are the challenges you see for musicians today?

I have close to 30-35 students, and I was heading the Akal Colllege of Divine Music and Spiritualism in Himachal Pradesh. I taught sarod, rabab, and the sarangi. I love doing this work. Some of my students travel to India from abroad every year and live here. They come from Germany, France, Israel. So, the future looks bright. The only question is regarding the scope they have in the future. The problem, as I mentioned before, is that the information is not widespread. If that changes, the situation will change automatically.